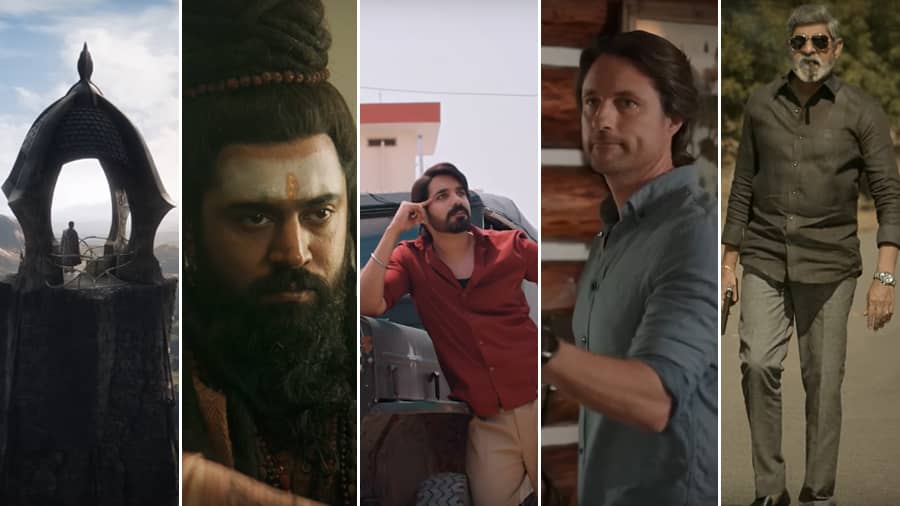 The Lord of the Rings: The Rings of Power

Amazon Prime Video dropped a sneak peek of the highly anticipated series The Lord of the Rings: The Rings of Power. This epic tale is set thousands of years before the events of The Hobbit and The Lord of the Rings books. The series is based on J.R.R. Tolkien’s legendary second age of middle-earth’s history. In this 60-second teaser, an ominous sign in the night sky raises questions for the inhabitants of Middle-earth. The series will continue Tolkien’s timeless tale which has been immortalised on celluloid by filmmaker Peter Jackson. The Lord of the Rings: The Rings of Power will start streaming on September 2 in multiple languages worldwide including English, Hindi, Tamil, Telugu, Malayalam and Kannada.

The trailer of Malayalam superstar Nivin Pauly’s fantasy drama Mahaveeryar is out. Going by the trailer, the film looks like an amalgamation of varied genres. The two-minute-27-second trailer opens in a courtroom where it seems a case is being fought against a godman, who is trying to prove his point by giving evidence of God’s existence. We also get to see visuals of a bygone era of kings and queens as the case evolves into something beyond the ordinary. Mahaveeryar also has elements of time travel. Directed by Abrid Shine, the cast includes Lal, Lalu Alex and Siddique, and will hit the theatres on July 21.

Zee5 has released the trailer of its upcoming light-hearted series Maa Nella Tank. The eight-episode series will mark the OTT debut of Telugu actor Sushanth. This feel-good comedy drama is directed by Lakshmi Sowjanya. The trailer gives us a glimpse of a cop (played by Sushanth) dealing with the problems of a village and its inhabitants. There’s also the budding romance of the cop and a village girl. Apart from Sushanth, the series stars Priya Anand, Prem Sagar, Nirosha, Ramaraj, Divi, Annapurnamma, Appaji Ambarisha and Bindu Chandramouli. Maa Neella Tank will stream on Zee5 from July 15.

Netflix has released the trailer for Season 4 of their romantic drama series Virgin River, based on the novels of Robyn Carr. The show stars Alexandra Breckenridge as Melinda Monroe, a nurse practitioner who accepts a job offer to move from Los Angeles to the titular North Carolina small town. The trailer centres around Melinda, who is pregnant and unsure whether or not the baby is Jack’s or if the father is her late husband Mark. The newest season focusing on the relationship and life of the central characters will have 12 episodes. Season 4 of Virgin River will premiere on Netflix on July 20.

Disney+ Hotstar released the trailer for Season 2 of their Telugu crime drama Parampara. The show is a representation of the David Vs Goliath story where an underdog fights his powerful and ruthless uncle for the integrity and honour of his wronged father. The one-minute-28-second trailer gives us an indication of the upcoming internal conflicts plaguing the Naidu family. The series stars Jagapathi Babu, Sarath Kumar, Naveen Chandra, Ishaan and Aakanksha Sing. Parampara Season 2 is set to premiere on Disney+ Hotstar on July 21.