Advertisement
Home / Entertainment / Madhuri Dixit to Priyanka Chopra: Check out what celebs have been posting on Instagram

Madhuri Dixit to Priyanka Chopra: Check out what celebs have been posting on Instagram 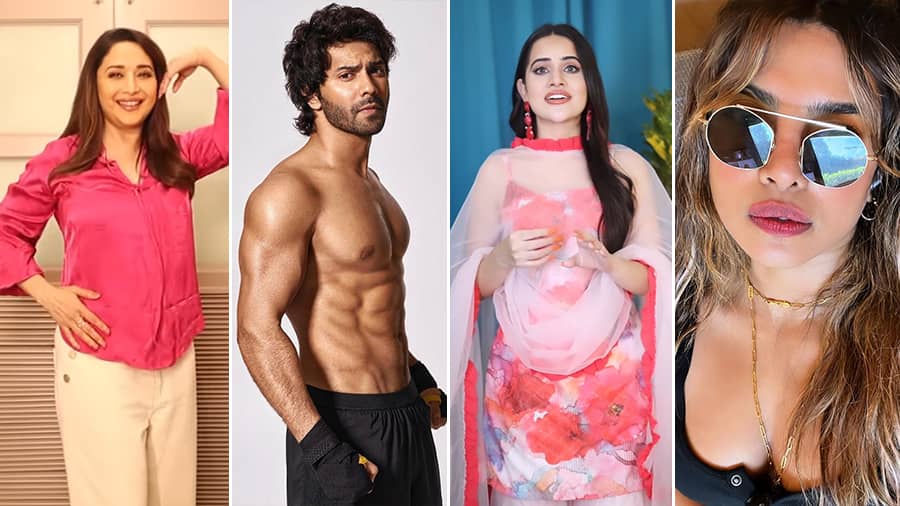 Director Zoya Akhtar shared a picture with the cast of her upcoming Netflix release, The Archies, based on the popular Archie Comics. The film marks the debut of Janhvi Kapoor’s younger sister, Khushi Kapoor, and Shah Rukh Khan’s daughter, Suhana Khan.

Madhuri Dixit never fails to impress with her dance moves. She shared a stunning dance reel, where she is seen grooving to a trendy version of the song Bahara from the Punit Malhotra-directed I Hate Luv Storys.

Varun Dhawan’s shirtless picture has got us inspired to hit the gym more often. The Jugjugg Jeeyo actor wrote: “Cut down the voice & please eat your carbs”, while his Bawaal co-star Janhvi Kapoor commented, “But I’m on keto”.

Farhan Akhtar’s cryptic post about Bhaag Milkha Bhaag, in which he starred in the title role of Milkha Singh, got us wondering what the actor-director is up to this time round.

Rannvijay Singha, former host of reality TV show Roadies, shared a reel where he and his ex co-hosts of the show, Raghu Ram and Rajiv Lakshman, are walking towards the camera on the RRR track, Together We Rock. The three are reportedly going to be seen next in a digital dating reality show.

Mouni Roy shared a video compilation of her visits to Kolkata, showcasing Bengali sweets and cuisine and even a glimpse of Aranyak actor Parambrata Chattopadhyay playing the dhaak during Durga Puja.

Comedian Kapil Sharma put his singing skills on display with a soothing rendition of  Hariharan’s Kab tak yunhi rulayegi on the set of his show, Comedy Nights with Kapil. He captioned it: “One of my favorite gazal of singer Hariharan sahab 🤩”