Advertisement
Home / Entertainment / Made In China: showcasing the magic of 'India Ka Jugaad' 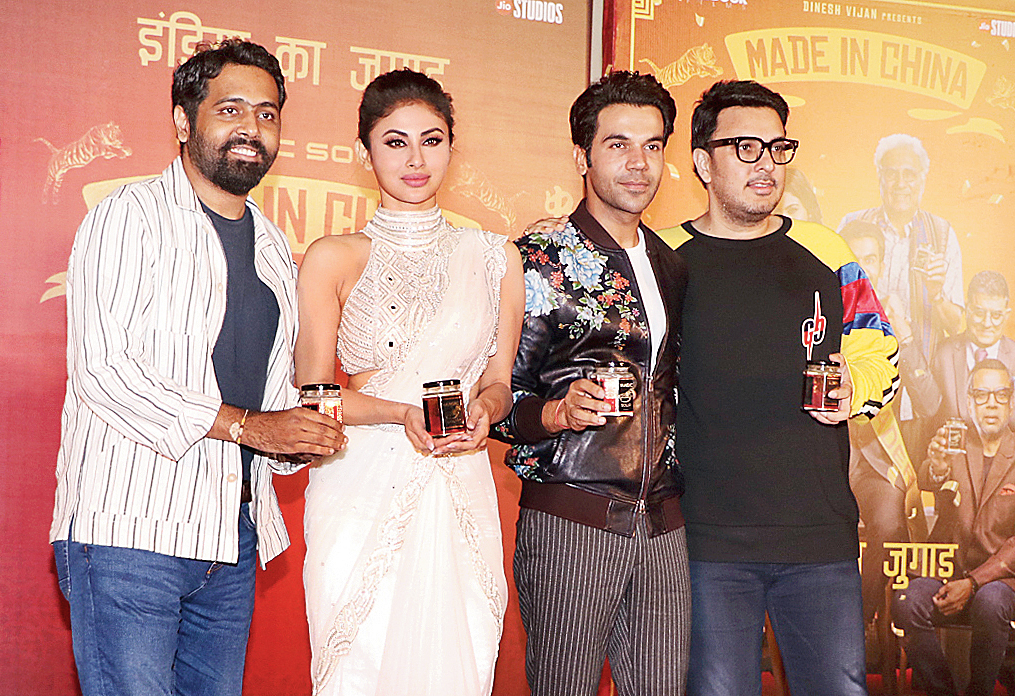 Rajkummar Rao plays Raghu, a failed, pot-belied Gujarati businessman, in Made In China, a film showcasing the magic of “India Ka Jugaad” in a foreign country. The Woods was at the media interaction for the film’s trailer launch. Excerpts from conversations with director Mikhil Musale, producer Dinesh Vijan, and leads Rajkummar and Mouni Roy...

Q: What do fans mean to you…

Mouni: Family. They literally make us. The kind of appreciation and unconditional love they have shown us over so many years, you can only be grateful and overwhelmed.

Rajkummar: Whatever I’m today is because of the audience. I dreamt of becoming an actor in a small town in Haryana, came here, and got so much love. Sirf kaam ke dum pe they brought me here. I’ve a lot of gratitude.

How did you prepare…

Rajkummar: I had to gain some weight… I also requested my make up team to give me unibrows!

Dinesh: When I saw Made In China, I called Raj up. I believe it’s his best performance till date. He will make you emotional, he will make you laugh. I think he has done really well.

How did this happen?

Mikhil: Raghu is a struggling businessman from Gujarat. I’ve also been a struggling filmmaker and this journey started since 2014 when I was pitched a one-line idea. I realised that it required at least three years of writing and that we had to prove our credentials first by making a Gujarati film. Fortunately, that film won a National Award. After 18 months, our script was ready when Dinu (Dinesh) sir came to my life like an angel.

Mouni: Working with Dinu was a dream come true because not just me, he has given so many new actors so much work and made them who they are today. It has been a joyride with Rajkummar and Mikhil sir.

Biggest jugaad that you pulled off...

Mouni: Mine are every day tiny jugaads. I love to constantly compartmentalise things... I make a tiny silver jewellery box into an elaichi box. I feel very happy and proud about these jugaads.

Rajkummar: I’m from a middle-class family in Gurgaon so we used to find jugaad in everything. If toothpaste was over, we wouldn’t throw it away, we would try to still take it out!

Dinesh: I’m from a transportation and logistical background. My grandfather came from Rawalpindi, Pakistan, with Rs 5,000. That’s the biggest jugaad. When I told him I want to make movies, he almost fell off his chair. To be able to come here and do what you love is the biggest jugaad of my life.

Mikhil: Getting my first Hindi feature film and get my dream cast.

Rajkummar: I don’t prepare for my award speeches, you never know kab milega aur kab nahi milega. I love preparing for my characters and Raghu is an exciting part. I always wanted to play the role of a businessman and that too a Gujarati.

I was a Gujarati in Kai Po Che! but that was very subtle. Here, I had a chance to go all out. Mikhil knows Gujarati well because he grew up there. Everyone created such a great Gujarati world that I started smelling Gujarat in my script. When you see the film, you’d feel you’re in that city. I had an amazing time shooting for this film.

Q: An outsider who’s now one of the top-notch actors in the industry… Was there any jugaad there?

Rajkummar: When I was looking for work, a lot of people told me, arre jugaad lagana padta hai. You have to build contacts and network. But I couldn’t do any of that, so I could never do any jugaad when it came to work. I was just meeting a lot of casting directors, showing them my show-reel and trying to convince them to call me for auditions. That’s how I started my journey… In any artistic line, jugaad can only take you so far, after that it’s your talent.