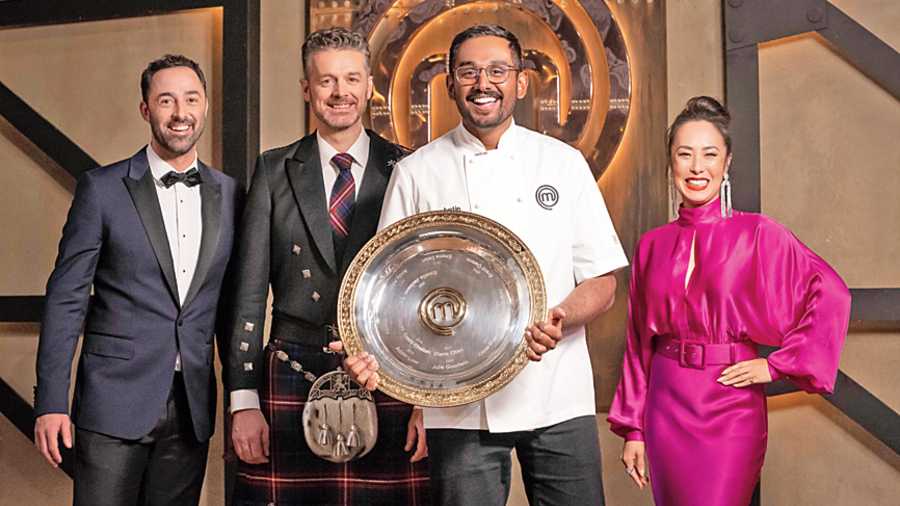 Justin Narayan, an Australian youth pastor of Fijian-Indian heritage, was recently crowned the winner of MasterChef Australia 2021 (streaming on Disney+ Hotstar Premium and Disney+ Hotstar VIP). The 27-year-old — who admires the likes of Gordon Ramsay and Jamie Oliver — chatted with The Telegraph on what the win means to him, his earliest memories of food and his Indian cuisine favourites.

Double congratulations for the MasterChef Australia win and for getting married recently. It’s been an eventful few weeks...

Well, it still feels like a rollercoaster ride. It’s all hard work, but I have loved every moment of it. It’s been so much fun, and I feel honoured. Good times ahead!

What were the predominant emotions like when your name was called out as the MasterChef Australia winner?

That moment... I was just completely shocked, confused and almost disoriented (laughs). I could never imagine that I would be there one day... so, so shocked.

What is it about MasterChef Australia that made you want to be a part of it?

I commented to a few friends jokingly that I wanted to apply. They made sure that I went through with that. It’s such a great show! I remember watching it growing up, with my grandparents and it was a show that we always enjoyed. To be part of it was something that I thought would always be cool, but I never had the skill or the knowledge to get there. It’s just crazy to see where that landed! (Laughs)

In hindsight, what worked for you and helped you go all the way?

I had a lot of support from my family and my fiancee, who is now my wife. They were always very encouraging. I also just had the drive to keep learning and keep growing. I wanted to honour the decision of the judges to give me an apron, and I wanted to do them proud.

What are your earliest memories of being in the kitchen?

My earliest food memories are of helping my mom out in the kitchen. We would have guests coming over and I remember my grandfather and I always having dal bhaat with some pickled chillies. That’s something I always really loved.

When did you start cooking independently?

Every time I wanted to eat something different, mom was always accommodating and would allow me to jump into the kitchen. I started experimenting and doing a little bit of baking and making some steaks and mushroom sauces and mashed potatoes and things like that. Dad really enjoyed it, and I would do it every now and then.

What made you realise this was your calling?

It’s always been a passion and hobby, something that I always did for friends and family. The fact that I could do this for a living never really occurred to me. I knew it was a possibility, but it was also a long road to get there. If there was a shortcut to get to it, then MasterChef (Australia) would be it. So I thought, ‘Why not give it a shot? What’s the worse that can happen? Let’s see where this lands’. And as we can now see, it worked out pretty well (smiles).

On your MasterChef Australia journey, what would be your top moments?

I really enjoyed cooking at Three Blue Ducks (a restaurant in Brisbane). Also being at chef Martin Benn’s restaurant called Society. The moment when our families walked in during the grand finale was definitely a highlight.

It’s early days yet, but has life changed in any way since the win?

It has definitely changed things for me. Some fun opportunities have come up and there are many organisations that have approached me to work with them. It’s opened up doors to places I never knew I would ever have access to.

Is Fijian cuisine similar to Indian in any way?

Fijian cuisine has a lot of stews. Quite a bit of Fijian food is cooked underground. Lots of stews, meats, boil-ups... that sort of thing.

As a chef, is there a dish that you would love to cook and eat every day?

Well, most of those dishes are perhaps those I shouldn’t be eating every day! (Laughs) I love ice cream and I want to eat it every day. So also a Wagyu steak, but it would perhaps be a salad I would opt for every day.

What’s your favourite Indian dish to cook and eat and is there a dish you would want to give a makeover?

I love cooking my mum’s chicken curry. I did a version of it at the start of the competition, but I think I could possibly do a different version now, and that’s one dish I would like to redo.

What do you think of Indian cuisine in general and how it’s taken over the world?

It’s very diverse, given that there are so many cities, towns and regions. Almost every family has their own spice mix. Indian cuisine is very complex, but it can also be healthy and simple. Plus, it follows major food trends, like nose-to-tail eating and zero waste.

Where do you think your culinary drawbacks are?

I have so much to learn. I want to understand all the different regional foods better in India. I want to get better at pastries and perhaps nail a few ice creams.

At the start of your run on MasterChef Australia, you wanted to have a food truck at the end of the competition. Is that still a dream?

Yes, that would be awesome to do. We will see where that goes. My ultimate food dream is still developing in my head, but I would love to have a restaurant  of my own, a place where people can not only come together to eat but also connect.

What’s your message for a young boy in India who has a passion for cooking and wants to be where you are?

I would just say that follow your passion and what you enjoy doing. I would encourage parents to recognise their child’s talent and help him or her pursue it, however unconventional it may be. And one need not just stick to one thing in life. Give it a go for a bit and see where it lands you. You don’t have to make big decisions when you are 12-13, just test the waters now, but do whatever you do passionately.

A dish I can whip up in 15 minutes: I have actually done this a few times. I would do a bowl of chana masala.

My comfort food: Ice cream. I love the choco-mint flavour with fudge brownie pieces in it.

A dish from MasterChef Australia that I would want on my food truck/restaurant menu: A popcorn ice cream with a peanut praline and granita, which I did on the show and I feel I didn’t quite nail it. I would love to redo that one and it could be quite a good dish