Bohemian Rhapsody eclipses A Star Is Born at Golden Globes 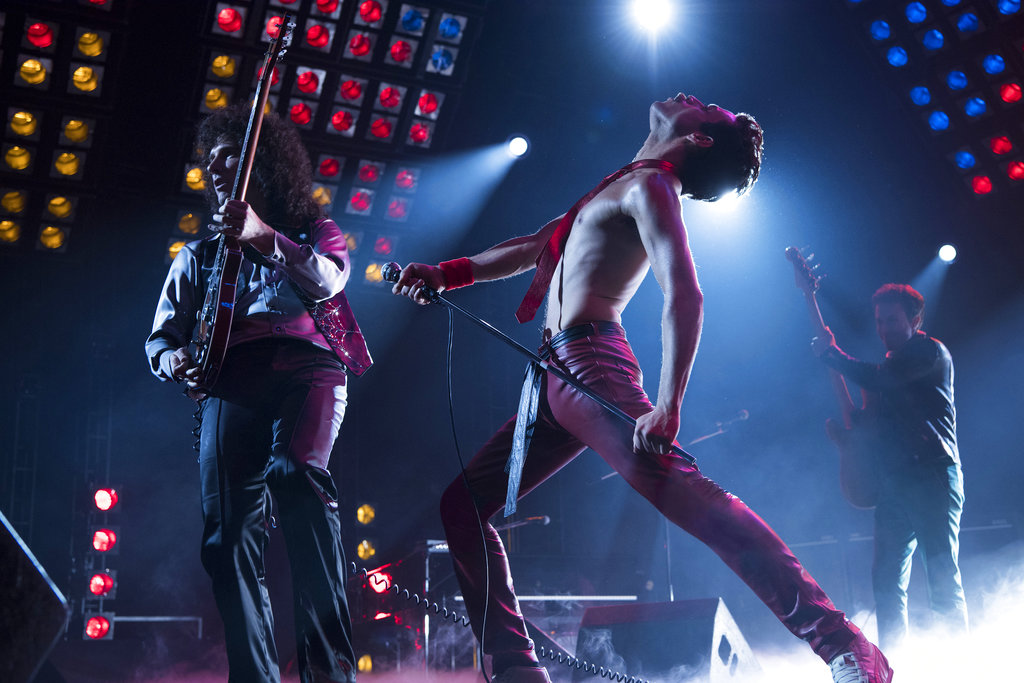 Thunder bolt and lighting rocked the 76th Golden Globes where a string of upsets culminated with the Freddie Mercury biopic Bohemian Rhapsody winning best picture, drama, over another movie about musicians: Bradley Cooper's much more heavily favoured A Star Is Born.

A Star Is Born came into Sunday's ceremony at the Beverly Hilton Hotel in Beverly Hills, California, as the presumed heavyweight and Oscar favourite. But Cooper's remake went home with just one award, for the song Shallow. Instead, the night's final two awards went to Bohemian Rhapsody — the popular but poorly reviewed drama about Queen's frontman, a movie that wrapped after jettisoning its director, Bryan Singer — and best actor-winner Rami Malek for his full-bodied, prosthetic teeth-aided performance as Mercury. 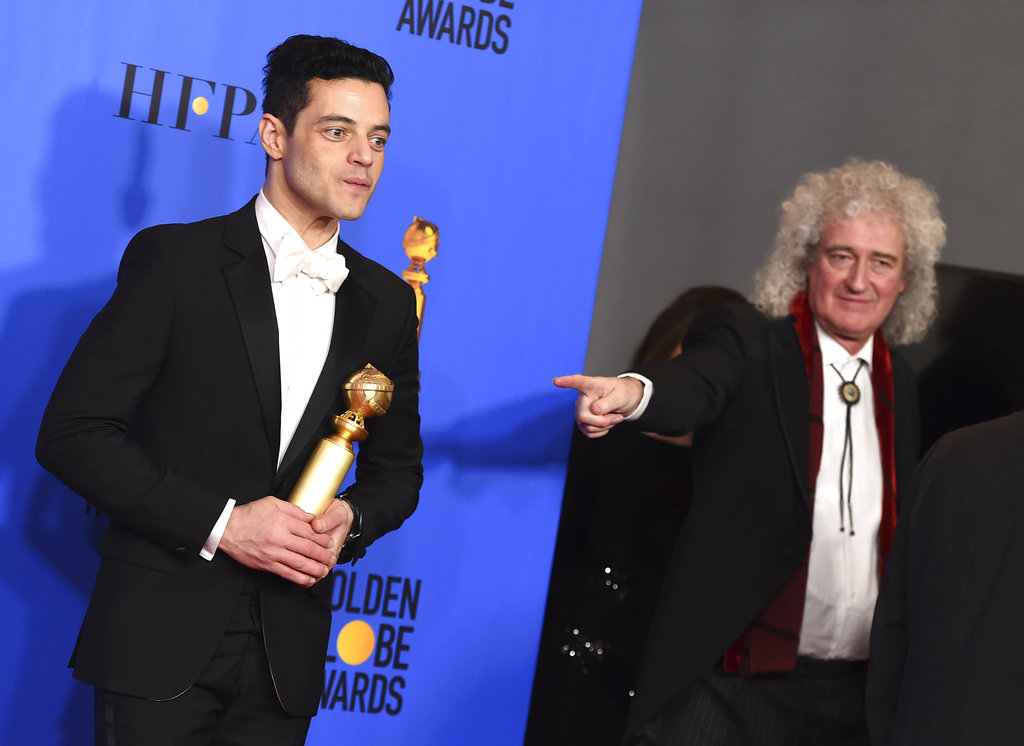 Rami Malek with his Golden Globe and Brian May of Queen. In his acceptance speech, Malek thanked Queen lead singer Freddy Mercury. "Thank you to Freddie Mercury for giving me the joy of a lifetime," said Malek. "This is for you, gorgeous."
AP 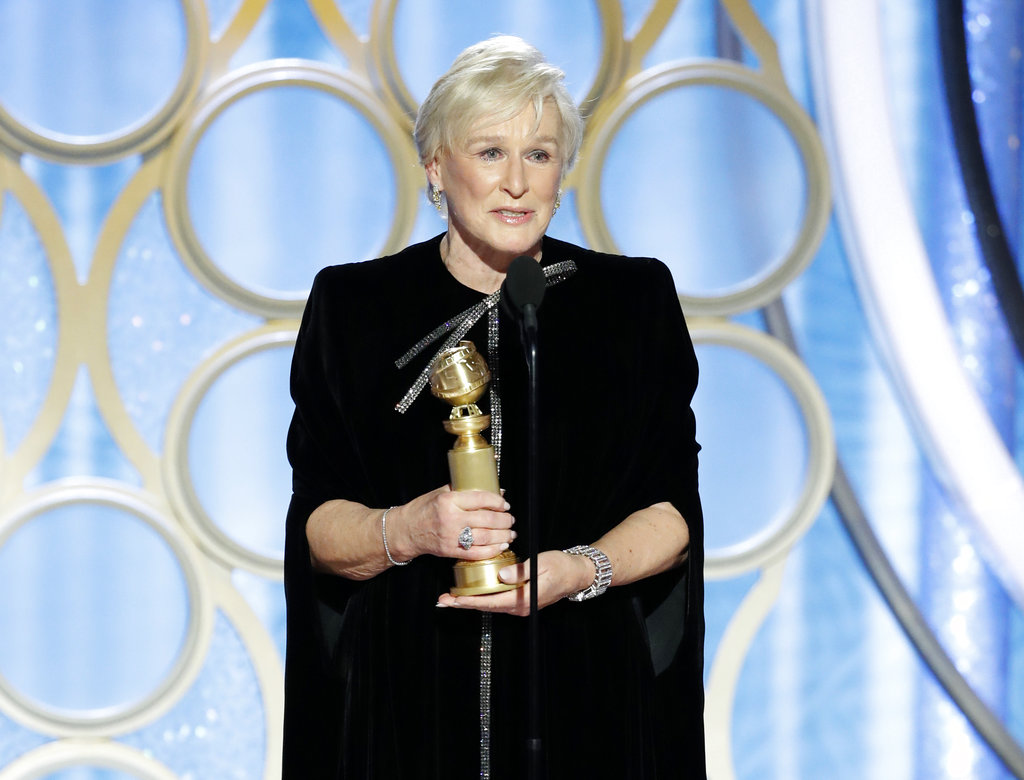 Few nominees were considered more of a sure thing than Lady Gaga as best actress in a drama. But Glenn Close pulled off the shocker in that category, too, for her performance in The Wife, as the spouse of a Nobel Prize-winning author. Close said she was thinking of her mother, "who really sublimated herself to my father her whole life". She met with a standing ovation. "We have to find personal fulfillment. We have to follow our dreams," said the actor, drawing still louder cheers from women in the crowd. "We have to say I can do that and I should be allowed to do that."
AP 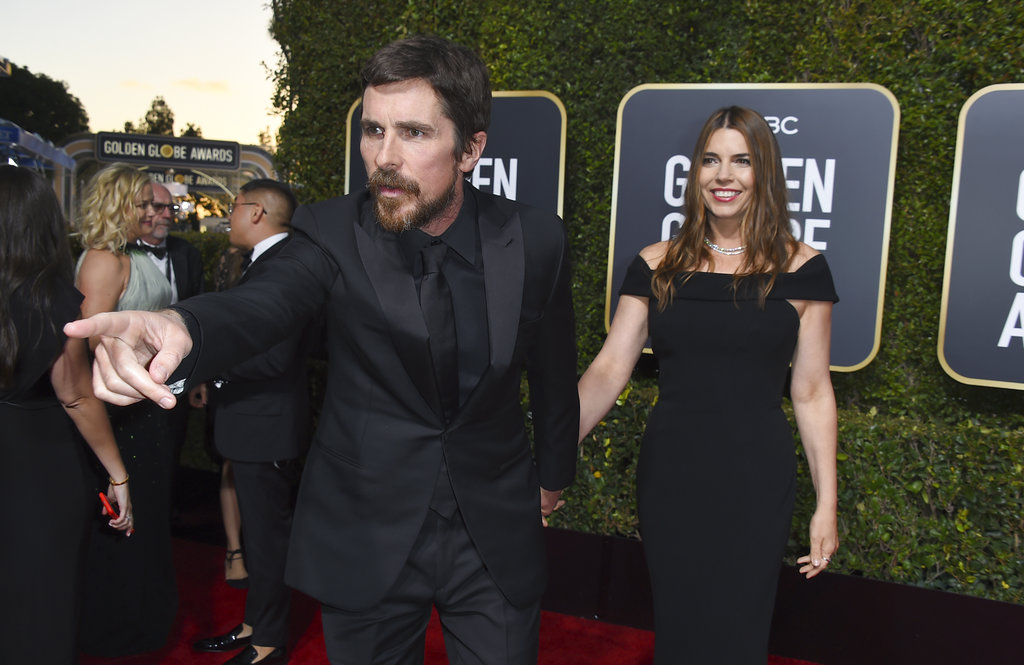 A year after Oprah Winfrey's fiery anti-Donald Trump speech at the Globes, politics was largely absent from the ceremony before Christian Bale took the stage for winning best actor in a musical or comedy for his lead performance in Adam McKay's Vice. He thanked the antichrist. "What do you think? Mitch McConnell next?" joked the Welsh-born actor, referring to the Senate's majority leader. "Thank you to Satan for giving me inspiration for this role."
AP 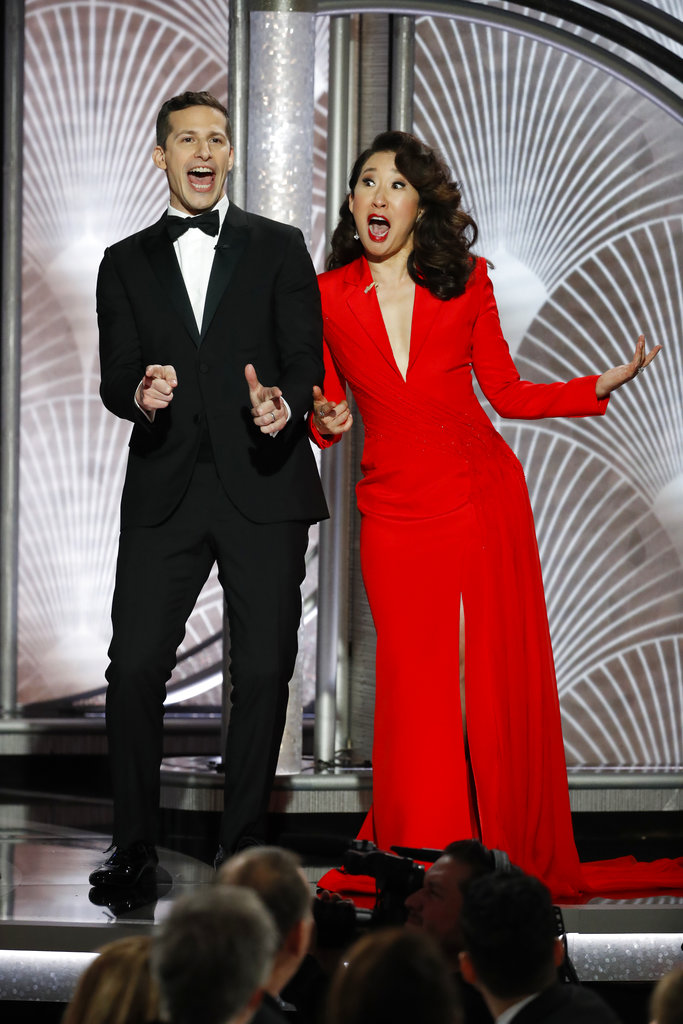 Co-hosts Sandra Oh and Andy Samberg opened the Globes on a note of congeniality, including a mock roast of attendees and a string of jokes that playfully critiqued Hollywood. Oh performed an impression of a sexist caveman film executive who casts like the title of Damien Chazelle's Neil Armstrong drama: "First ... man!" Noting the success of Crazy Rich Asians, Oh alluded to films with white stars in Asian roles like Ghost in the Shell and Aloha, the latter of which prompted Emma Stone, who starred in Aloha, to shout out "I'm sorry!" from the crowd.
AP 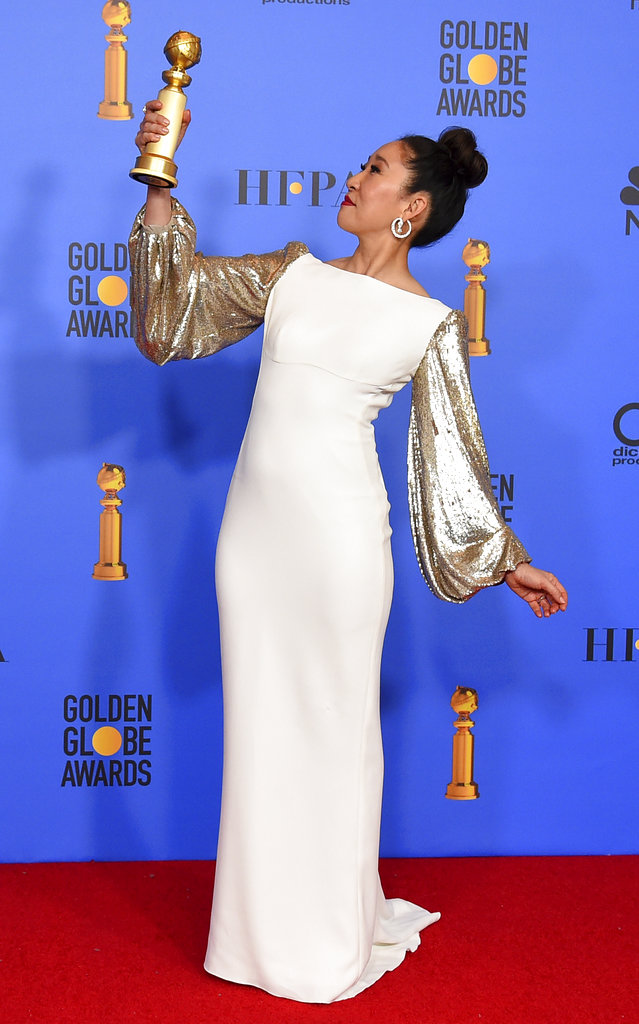 But Oh, who later also won for her performance on the BBC America drama series Killing Eve, closed their opening monologue on a serious note explaining why she was hosting. "I wanted to be here to look out at this audience and witness this moment of change," said Oh, tearing up and gazing at minority nominees in attendance. "Right now, this moment is real. Trust me, this is real. Because I see you. And I see you. All of these faces of change. And now, so will everyone else."
AP 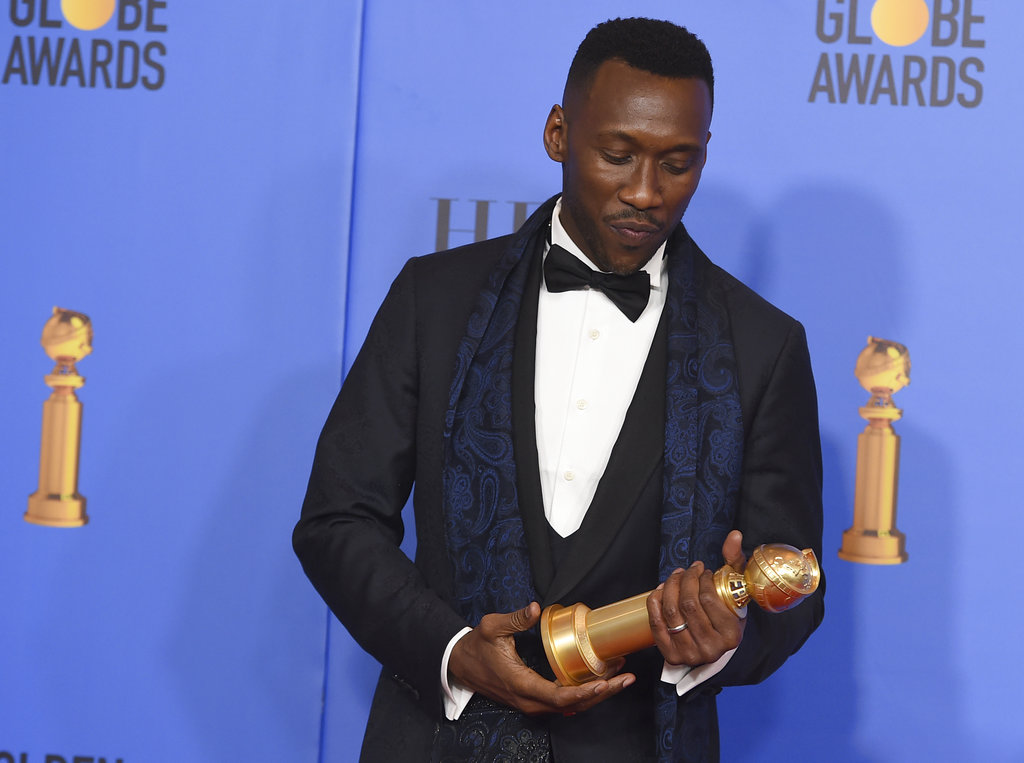 Some of those faces Oh alluded to won. Mahershala Ali, whom the Foreign Press Association overlooked for his Oscar-winning performance in Moonlight, won best supporting actor for Green Book. While the Globes, decided by 88 voting members of the HFPA, have little relation to the Academy Awards, they can supply some awards-season momentum when it matters the most. Oscar nomination voting begins on Monday.
AP 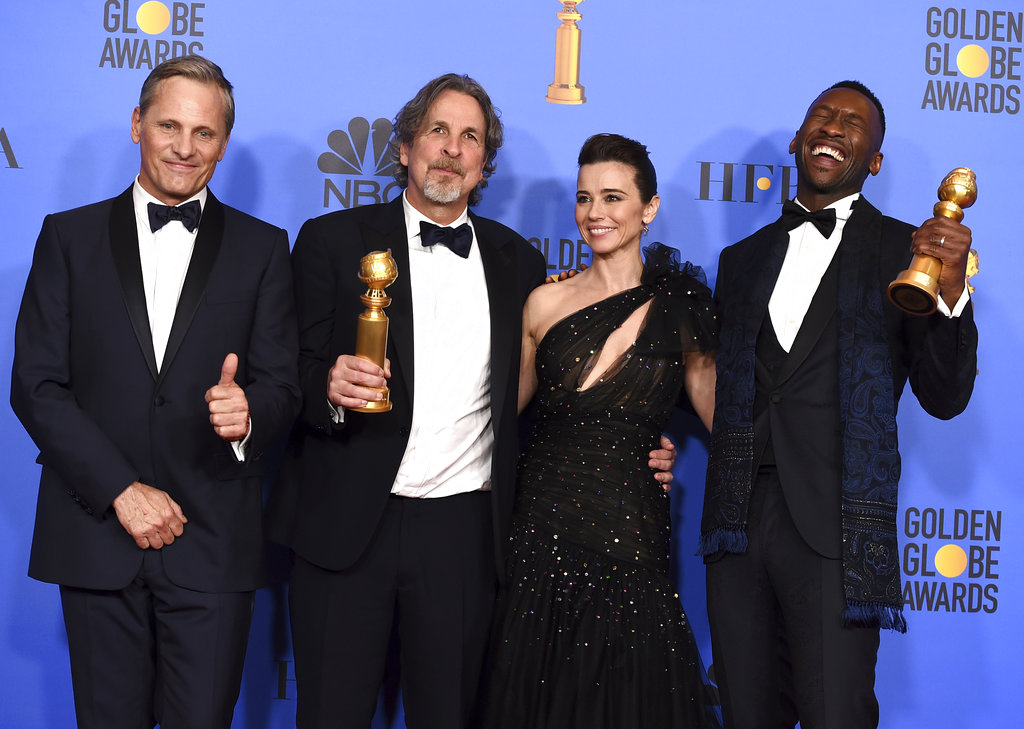 (From left) Viggo Mortensen, Peter Farrelly, Linda Cardellini and Mahershala Ali. Arguably the biggest boost went to Green Book, Farrelly's interracial road trip through the early '60s Deep South, which has struggled to catch on at the box office while coming under harsh criticism for relying on racial tropes. It won best film, comedy or musical, and best screenplay. "If Don Shirley and Tony Vallelonga can find common ground, we all can," said Farrelly, the director best known for broader comedies like There's Something About Mary.
AP 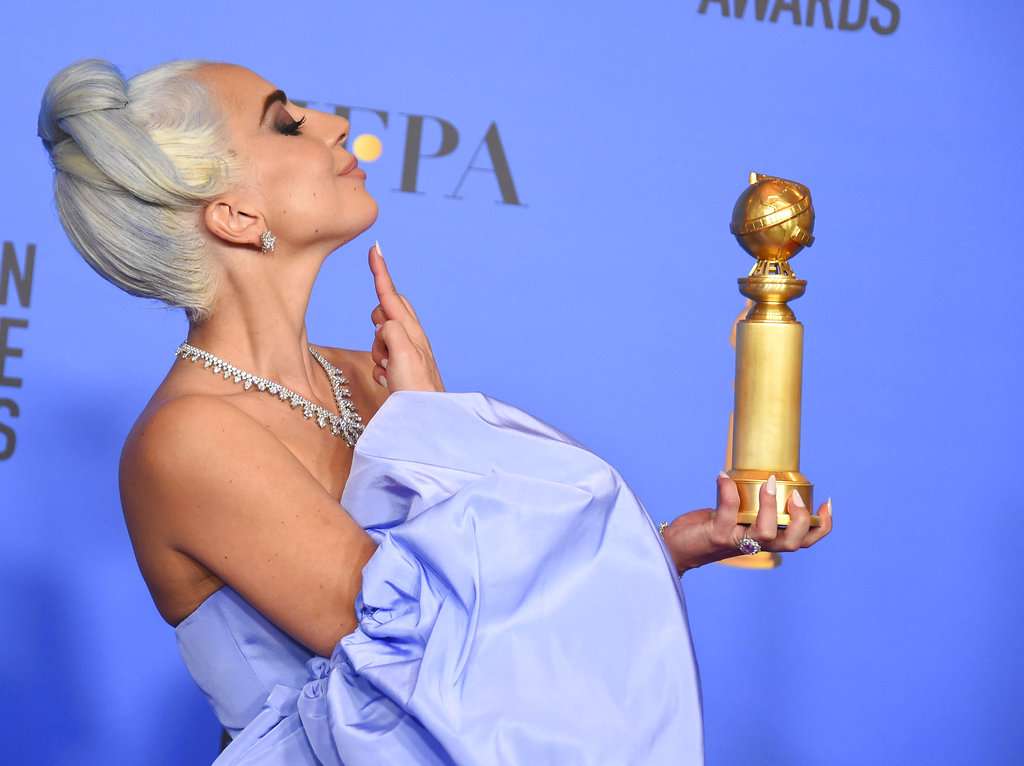 As expected, Lady Gaga, Mark Ronson, Anthony Rossomando and Andrew Wyatt won best song for Shallow from A Star Is Born, the only award for the much-touted film. "Can I just say that as a woman in music, it's really hard to be taken seriously as a musician and as songwriter and these three incredible men, they lifted me up," Gaga said.
AP
Lady Gaga A Star Is Born Bohemian Rhapsody Sandra Oh Mahershala Ali Rami Malek Glenn Close Golden Globe Awards 2019
Share
Advertisement
Advertisement
Advertisement
Copyright © 2020 The Telegraph. All rights reserved.