Hit on the web

Our hindi film picks, on screens small and big, in 2020 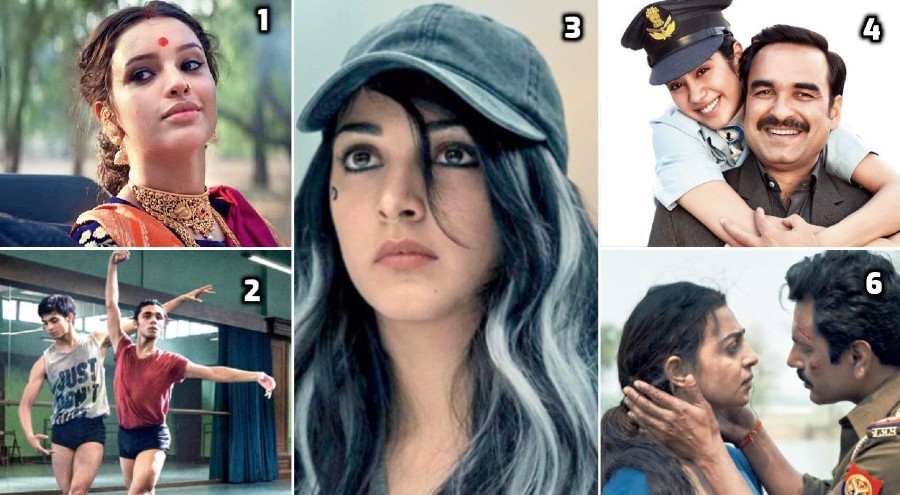 A feminist fable set in period Bengal, Bulbbul meshed a variety of genres to tell a powerful and pathos-filled revisionist tale of a woman wronged. Anushka Sharma’s second successive venture as a producer on the web proved to be a winner for Netflix, riding on both style and substance, with debutant director Anvita Dutt drawing on many references — classic pre-Renaissance Bengal to desi horror goth — to tell a tale that remains relevant even today. Bulbbul was powered by some great acts — Rahul Bose to Avinash Tiwary, Paoli Dam to Parambrata Chattopadhyay — but it was Tripti Dimri’s, ambiguous walk and talk, as Bulbbul, that made the film what it was.

When it hit Netflix in February, few expected Yeh Ballet to make waves. Directed by Sooni Taraporevala, this film about two Mumbai slum-dwellers fighting against all odds to pursue their dream of ballet dancing, struck an immediate chord with its threads of underdog tale, wish-fulfilment and coming-of-age story. Ballet dancer Manish Chauhan (playing a fictional avatar of himself) teamed up with newbie Achintya Bose (in the role of Amir Shah, who won the Royal Ballet School’s Nadia Nerina Scholarship in 2017) to recreate a real-life story that benefited from solid writing and even more solid performances.

This Netflix film, frontlined by Kiara Advani, may have been flawed, but was an important take on the #MeToo movement. Largely powered by women — Ruchi Narain directed Guilty off a script she co-wrote with Kanika Dhillon and with Atika Chohan pitching in with the dialogues — Guilty played with perspective and perception, laying bare our ingrained prejudices. It may have been unnecessarily overdramatic in tone for the most part, but its he-said-she-said narrative played out interestingly, with the film succinctly examining exploitation, power, gender dynamics, sexism, the class divide, patriarchy and judgment.

The shero story of Gunjan Saxena — the first woman pilot of the Indian Air Force who plunged into combat during the 1999 Kargil War — found its way to the screen in an emotional and deeply resonating film. Janhvi Kapoor, playing the title role, was a revelation, with this Netflix film emerging as much a father-daughter story (the chemistry between Janhvi and Pankaj Tripathi, playing Gunjan’s dad, was one of the biggest highlights) as it was about a young girl showing gumption and grit to shatter many a glass ceiling. One of the most feel-good films of the year.

A scathing look at the ugly underbelly of caste and privilege, this Netflix film stood tall on the back of a stellar Nawazuddin Siddiqui, and was a sharp and incisive look at caste and social construct through the eyes of a Dalit man, played by Siddiqui. A satire, designed to cock a snook at systematic marginalisation, this Sudhir Mishra film was both bold and biting, but also packed in subtle humour.

Another Nawazuddin Siddiqui film on Netflix. But this time a noir thriller tempered with social commentary. Raat Akeli Hai, directed by first-time film-maker Honey Trehan, had Nawaz’s small-town cop operating as both a sleuth and a seeker of truth, ably supported by an eclectic mix of actors, most notably Radhika Apte. A classic locked-room murder mystery that successfully defied many genre conventions, Raat Akeli Hai scored with its visual palette and haunting background score.

Anurag Kashyap has been throwing a curveball at the audience with his last few films (who could have thought the Gangs of Wasseypur man could direct a romance before Manmarziyaan?!) and with Choked, the man served up a Netflix film that explored the dynamics of a marriage, gender politics and sky-high aspirations juxtaposed against limited means. Saiyami Kher slipped effortlessly into the part of Everywoman Sarita, whose life is thrown into disarray when her kitchen sink starts coughing up wads of cash every night. Powered by social commentary, the film had an intriguing premise, which may have faltered in parts, but Kashyap excelled in building an authentic world and in his use of wry humour, picking on everything from demonetisation to the promise of the still elusive “achhe din”.

In June, Shoojit Sircar became the first name of repute to bite the direct-to-digital bullet. Premiering on Amazon Prime Video, Gulabo Sitabo turned out to be a pitch-perfect satire. Firmly entrenched in the Indian milieu, the film was a delight, packing in humour, exaggeration, relatability and socio-political commentary. Amitabh Bachchan, slapping on prosthetics that rendered him unrecognisable, teamed up with Ayushmann Khurrana for the first time, with Lucknow lending both tone and texture to the film. The supporting acts — in particular, the delightful 80-plus Farrukh Jaffar — powered the film, that may have been uneven in parts, but played out partly like a fine dark comedy and partly like a Shakespearean tragedy.

True to form, Anurag Basu once again gave us a film that didn’t allow itself to be slotted. Four parallel stories, each standing for a colour on the Ludo board, played out, powered by a strong ensemble cast, in their individual bubbles before seamlessly coming together in a chaotic-by-design climax. Operating on the philosophy that “Ludo is life and life is Ludo”, the film, released on Netflix, turned out to be a mad but immensely watchable ride, its win lying in the fact that it managed to root its absurdity in authenticity.

Sci-fi and spirituality, tempered with mythology and mystique, defined this staggeringly original film by Arati Kadav. The debutant director used sci-fi tropes familiar in the films of the West, but crafted a story that was wholly rooted in the Indian ethos. Vikrant Massey and Shweta Tripathi gave life and soul to Cargo, with the Netflix film touching upon the concepts of rebirth and afterlife, focusing on dystopia and examining existentialism and the art of letting go. As a film, it broke new ground, heralding the arrival of a distinctive voice in Kadav.

Playing out on Eros Now, nothing was black and white in the world of Halahal, with the film designed as a social thriller that was both self aware and satirical. Functioning as an investigative drama — with Barun Sobti’s morally ambiguous cop taking centrestage — Halahal worked primarily because of its strong emotional core, with Sachin Khedekar effectively playing a distraught father determined to bring his daughter’s killers to justice.

Mockumentary and mumblecore came together in this meta watch helmed by Vikramaditya Motwane, that pitted Anil Kapoor (AK) against Anurag Kashyap (AK). Formatted as a movie within a movie and playing out as a thriller, the Netflix film starred the two men as themselves and plonked them in the middle of a feverish cat-and-mouse game that threw up some delicious twists. Winning full points for inventiveness, AK vs AK scored for the seamless manner in which it blurred the lines between real and reel, with both AKs at the top of their game.

Loud angst and quiet rebellion defined this what-women-want film helmed by Alankrita Shrivastava. Dolly Kitty Aur Woh Chamakte Sitare, that premiered on Netflix, explored women being burdened by — and most often not even acknowledging it — patriarchy, moral policing, sexual stereotyping and gender bias. The film sparkled on the strength of reality and relatability (though the ending was too much of a cop-out), benefiting from a confident turn from Bhumi Pednekar as Kitty. But Dolly Kitty Aur Woh Chamakte Sitare truly belonged to Konkona Sensharma’s Dolly, with the actor ably balancing the naive with the coquettish.

Showing on Zee5, this bittersweet tale of an Indian family trying to pull out all stops to celebrate their young son’s birthday in the middle of war-torn and politically-ravaged Iraq, stood out for its simple storytelling and was anchored by strong performances from Vinay Pathak and Tillotama Shome. Chintu Ka Birthday may have lacked dynamism, but the inspiring manner in which it told the extraordinary story of ordinary people who manage to seek out hope in hopelessness, made it a feel-good watch.

Special mention: When it comes to innovation in form, Taish scored a home run. The Bejoy Nambiar-directed thriller dropped on Zee5 simultaneously as a 150-minute film and a six-part series, with the series packing in more nuance and detail. The interesting plot —  a face-off between two Indian families in England, hailing from diverse backgrounds, playing out against a big fat wedding — was underscored by too much style and very little substance, but as an experiment, Taish deserves a pat on the back. And that soundtrack was a dream.

In early March, just before the pandemic dimmed the lights of movie theatres, Anubhav Sinha gave us a soul-searching film in Thappad. Taapsee Pannu carried a film that hinged on a single act (most would, unfortunately, dismiss it as innocuous), but one  that brought the disparity of gender dynamics out in the open and most importantly, catalysed a woman’s (Amrita, played by Taapsee) awakening. The film put male entitlement and misogyny under the microscope, very tellingly illustrating how gender politics in our society is skewed in favour of the man, with the woman often perpetuating the imbalance. Taapsee, as expected, was top notch.

Director Meghna Gulzar teamed up with Deepika Padukone to serve us a story of an acid attack survivor who displays remarkable resilience in the face of tragedy. As Malti, Deepika, her features hidden under layers of prosthetics, sacrificed vanity for reality, giving us a film that mirrored the times we live in. Chhapaak seamlessly shifted between a human story, a police procedural and a courtroom drama, with Malti’s quest for justice being one of dignity and quiet fortitude.

Released in theatres in November after being feted at festivals worldwide, Sir revealed the deep caste chasm inherent in our society even as it explored an unconventional love story. Stirring turns from Tillotama Shome and Vivek Gomber powered this Rohena Gera directorial which, more than anything else, was a story of dreams crushed and realised.

Angrezi Medium may have been an uneven watch, but how can this list not have a film which starred Irrfan? The actor, who passed away a month after the film’s release, was its beating heart, making us laugh and cry with his heartwarming act of a father. Comedy to heavy drama, the man excelled, like he always did, with that shot of his Champak smiling and staring out of the car window remaining firmly etched in memory.