The advent of streaming platforms has heralded an era of diverse content, and these women are benefiting from this new wave 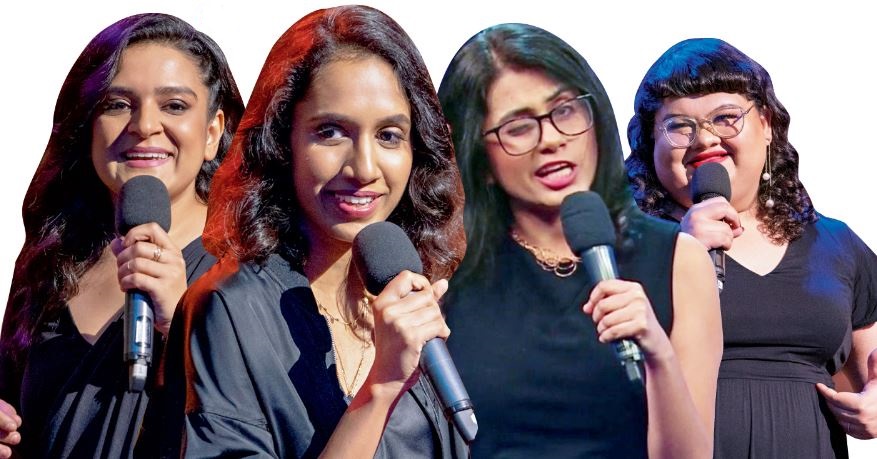 “I have been very, very surprised by the positive reactions to Ladies Up. I was expecting a lot of hate because I do get a lot of hate most of the time for what I say on stage,” says Kaneez Surka, who has been in the business for over a decade-and-a-half. Born and brought up in South Africa, Kaneez has worked her way up the Indian stand-up comedy scene and for most, she will be familiar for her comedy sketches on The Week That Wasn’t, alongside fellow funnyman Cyrus Broacha.

Surka’s set on Ladies Up is the most edgy and potentially the most controversial, with the 36-year-old letting it rip on everything, from her broken marriage to her rapidly galloping biological clock, and she even slips in a cheeky political joke. It has to do with ‘chai’ (yes, go figure).

The positive reactions have been a shot in the arm for Surka — as well as for the other women on Ladies Up — but they are all aware of the fact that this doesn’t mean that they are going to have it any easier going forward.

“Audiences are more accepting of men being funny. I think women comedians have to be twice as funny as men to be able to be judged as being good. Actually, even when I was younger, I just assumed that men will be funnier than women. That’s the kind of conditioning we all have,” Kaneez tells The Telegraph.

A fact echoed by Prashasti Singh. “As a woman, you have to be very, very good to be able to win over your audience, and I say that from experience. A large part of the audience still comes in with a bias... ‘Is she REALLY going to be funny?’ The Indian audience, in general, thinks that women can’t be funny. If they laugh at our first two jokes, then we are kind of okay. The initial inertia of the audience watching a female comedian vis-a-vis a male comedian is definitely more,” says Prashasti, who gave up a career as an engineer to turn to comedy full-time a few years ago. Most of her jokes, as seen in her stint on Ladies Up, revolve around the tricky terrain of dating and marriage.

Supriya Joshi — popularly known as ‘Supaarwoman’ — feels that men have it “far easier” than women when it comes to being accepted by the audience. “If one woman goes up on stage and her joke doesn’t work, then all women are branded as being unfunny. So every time we go up and tell a joke, we carry the burden of the entire womankind on our backs. Men don’t have to face that. A man can go up on stage, fail and come back and say, ‘Okay, I had a bad day’,” she says with a shrug and a smile.

Comedy is serious business. More so in the case of the women constantly looking to break the glass ceiling and make themselves heard — with or without a mic in hand — in the stand-up comedy scene in India. The country’s stand-up business is rapidly growing, but is largely skewed in favour of men, like it is almost everywhere else. For hundreds of men getting up on stage and making audiences laugh out loud at their jokes, there are only about 40 women stand-up comedians in India, give or take a few, who have to work harder — much, much harder — to do the same.

A relatively tougher route to gain entry into the vastly competitive scene, a largely inflexible audience perception of how women lack a funny bone and the fact that the material most she comedians come up with is mined from their own experiences of being women in a world (and business) dominated by men (and is hence, unfamiliar to most men in the audience), are perhaps some of the reasons behind the almost negligible number of women getting up on stage and trying to tease a laugh out of you.

But the times are a changin’. The advent of streaming platforms has heralded an era of diverse content, and benefiting from this new wave are the country’s female stand-up comedians. Ladies Up, an hour-long Netflix Special that dropped on the streaming platform recently, has four women comics — Kaneez Surka, Prashasti Singh, Supriya Joshi and Niveditha Prakasam — saying it all, dating angst to messy divorces, one-night stands to sexual preferences, in their respective sets. The reactions to the Special may have been divided, but it’s done its job in providing these talented women with a platform and more importantly, making the audience realise that women can be funny. When they want to be.

What they talk about on stage is important to these comedians, coming as it does from a personal space. Supriya, who is plus-sized and developed humour as a defense mechanism while being bullied in school for her weight, repeatedly stresses on body positivity, and she feels that she can see a change in mindset, at least in her immediate environment. “It’s tough to change the way people think. So I decided to change the way I think. I started telling myself that there has to be more to a person than just feeling bad about how he or she looks. Now when people reach out to me and say, ‘How are you so confident? How can we become like you?’ then I feel like they already know the answers to these questions,” she smiles.

On the other hand, Kaneez feels that women comics are “under greater pressure” to bring in both rage and relevance into their acts. “Women are always expected to have greater depth to what they say, and I don’t really think that’s fair... sometimes, you just want to make dumb, stupid, meaningless jokes!” she laughs.

Tomorrow #ladiesup a Standup comedy special featuring @PrashastiSingh @supaarwoman @NivPrakasam & I will be steaming on @Netflix!
Don’t miss it! Or do and then watch later cause that’s also possible. But watch it tomorrow because what else will u be doing right?@NetflixIndia pic.twitter.com/xpm1F098eb

For Niveditha Prakasam, it’s the largely ‘unfamiliar’ territory of the material that most women comics come up with, is what she feels acts as a barrier between them and the audience. “When a woman takes the stage to do comedy, she will more or less bring in a new perspective that’s not been done before. Globally, there are so few women in comedy that the female perspective is not familiar. The thing with comedy is that you have to be familiar with something in order to laugh at it. People will laugh if they relate to your experiences and that’s a disadvantage female comics have. But that doesn’t mean we stop talking about it. The more people hear it, the more they will get familiar with it and relate to it eventually,” says the comedian who largely talks about conservatism, growing up as she did in small-town Coimbatore.

“The idea is to just see it as ‘human content’ and not as ‘female content’,” feels Kaneez, who also believes that audiences, especially in the metropolitan cities, are slowly but surely opening up to women comedians talking openly about issues that bother them.

“I remember doing the ‘boob joke’ (a joke that draws parallels between sex and breastfeeding that Kaneez performed on Ladies Up) a few years ago, and the audience was just like, ‘Tsk! Tsk! Tsk! Tsk! Tsk!’ They just did not like that I was going into that space. But now I see the difference... they are far more relaxed with seemingly uncomfortable jokes. It could be due to the fact that the audience is far better educated, with what women go through now being a lot more normalised. So many of us are talking about it, so it’s becoming more normal in the audience’s perception,” says Kaneez.

Material apart, Prashasti feels that demographic has a lot to do with the level of acceptance that comes a female comic’s way. “Audiences in the big cities comprise an equal number of men and women, they are more open and educated and everyone’s more aware of what’s happening in the world. But in the smaller towns and cities, going in as a female comic means that they have given me a chance once... they won’t give it to me again” she says. Prashasti is of the opinion that it’s not “activism or preaching” that will bring about a change in the audience’s perception with respect to female comedians. “That can only change if and when enough women go out there and make people laugh. But that will take some time,” she says. For Prashasti, it’s been the initial strides taken by some of the first female comedians in the business — Aditi Mittal, for instance — that has paved the way for female comics in her generation and also helped in making the audiences more accepting.

Thankyou for being my inspiration. #LadiesUp is streaming on @netflix ! #DekhLo

So is there anything that is a complete no-no for these irreverent women when they walk up and lay bare their lives and opinions on stage? “Ultimately, it boils down to whether I will be comfortable going up on stage and talking about it or not. Even in terms of what I talk about normally — which is dating and sex — there is a point beyond which even I am not comfortable talking about certain aspects of it. If I am comfortable going up and saying things about my family, then that means it’s not a secret, it can be shared. If something makes me uncomfortable, my involuntary reaction will be to anyway choke up when I talk about it on stage... so, I won’t do it,” says Prashasti, a fact that’s echoed by the others.

Despite its problems, if you are a woman looking to break into the stand-up comedy scene in India, then there’s no better time than now, feel these women.

“Now is the best time because everyone is very encouraging and open,” says Prashasti who feels that there is room for everyone, whether it’s men or women or comedians who do stand-up acts in different languages.

The trick, they say, is to just scour options for an open mic in your city or town and go and deliver your act. “There is more than enough space. Just write your material, find an open mic and go and perform without thinking too much. It doesn’t matter if you are good or bad, you will anyway not be able to find out the first time. There is a lot of support from women and men doing stand-up today and we want more diverse voices, which is what excites the audience also,” says Supriya.

Adds Kaneez, with a word of caution, “I feel that as women we have that one big problem of trying to perfect everything and that means it takes us so long to get out there. By the time we get out there, 20 men have already come up. Just get up and start doing it!”