El Camino, extends the Breaking Bad cinematic universe by two hours without really adding to it

Aaron Paul’s performance was often overshadowed by Cranston’s during the series’s run, but he’s phenomenal here 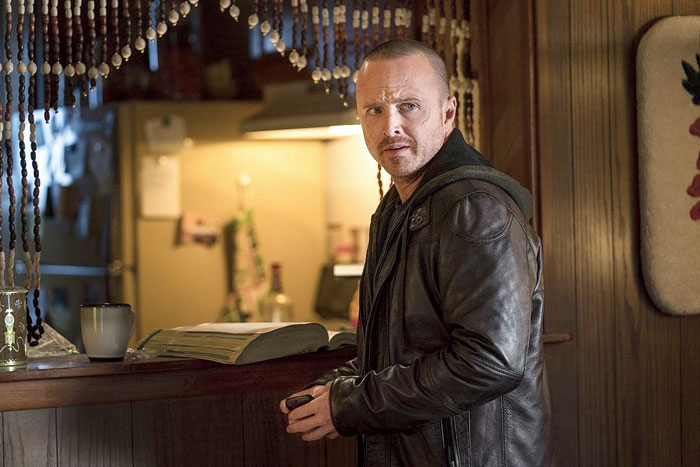 For much of El Camino Paul practically stars in a silent film, giving us Jesse as a hunted animal so scarred that even speaking is an effort
Still from the film
James Poniewozik/ NYTNS   |     |   Published 14.10.19, 02:37 PM

Early in El Camino, Old Joe (Larry Hankin), a junkyard proprietor, visits Jesse Pinkman (Aaron Paul) to relieve him of the stolen pickup-car that gives this sequel its title. This job’s on the house, he tells Jesse, for old times’ sake.

“Magnets!” he says, recalling a famous physics-based Season 5 escapade. “Yeah, that was a good one.” It’s a striking line, as if Joe were a nostalgic fan of the very story that he’s a character in.

If remembering the heyday of one of TV’s greatest series is enough for him, then he might be just the audience for El Camino, now on Netflix and in theatres. The film, written and directed by the series’s creator, Vince Gilligan, is a well-crafted postscript that entertainingly extends the Breaking Bad cinematic universe by two hours without really adding to it.

The Jesse we meet in “El Camino” is not the boisterous “Yeah, bitch! Magnets!” Jesse of memory, and with good reason. He’s vacant-eyed and half-feral, just freed from enslavement to a white-supremacist gang by his ex-partner, the druglord Walter White (Bryan Cranston). Showing up on the doorstep of his old buddies Badger (Matt Jones) and Skinny Pete (Charles Baker), he’s suddenly back in the land of liberty and Axe body spray, with hours to get his hands on enough cash to disappear before the law finds him.

Paul’s performance was often overshadowed by Cranston’s during the series’s run, but he’s phenomenal here. For much of El Camino he practically stars in a silent film, giving us Jesse as a hunted animal so scarred that even speaking is an effort. (This makes an asset of the 40-year-old Paul’s playing a character in his 20s; you can believe that Jesse’s last year aged him a decade.) When, in a flashback scene, his captor Todd (Jesse Plemons) talks him out of a gun and a shot at freedom, a tear leaks out of Paul’s eye like the last liquefied remnant of Jesse’s spirit.

Breaking Bad, with its standoffs and lonely desert vistas, was always at least half Western. El Camino is even more so, literally climaxing in a Wild West quick-draw gunfight and fitting its heist scenes into an outlaw-gets-out-of-Dodge story. El Camino means “the road” or “the way” in Spanish, and the title is as much about Jesse’s path from A to B as it is about his temporary wheels.

Scene for scene, the movie is a satisfying reminder of what Breaking Bad did so well, not simply because it manages curtain calls for Jonathan Banks (as the grizzled enforcer Mike Ehrmantraut), Robert Forster (as Ed, the vacuum-cleaner salesman with a sideline in disappearing criminals) and Krysten Ritter (as Jesse’s departed junkie soul mate, Jane — a rare female presence in what is a very male story even by Breaking Bad standards).

There’s that familiar, arid humour, much of it coming during that lost weekend at Todd’s apartment, when he and Jesse removed the body of Todd’s cleaning lady. (I had not pegged him as the space-age bachelor pad type.) There’s the trademark use of cars as character, as Jesse tries to make it to the finish line in a borrowed rattletrap Pontiac Fiero. Gilligan walks Jesse through a gantlet of frying pans and fires, a series of break-ins and double-crosses as tense and seamless as any Breaking Bad caper.

But that’s the thing: They’re almost exactly what you’d expect from a Breaking Bad episode, except more drawn-out. A series that popularised the idea of TV as “cinematic” — spectacular in visual scale, adept with surprising imagery and montage — has produced an actual film that plays like an extended TV episode.

Stipulating that it’s the lowest form of criticism to fault artistes for telling the story they did rather than the one you hoped for, I still have to ask: What did we need from El Camino? It ends with Jesse in Alaska, a place he talked about escaping to and the place I’d have assumed he ended up had the movie never been made. It’s a zippy and scenic ride, but we already had the map.

El Camino is more interesting when it makes us ask: Just what do we want for Jesse? It’s not simply escape. Even if we assume that he has suffered enough for what was, after all, a career killing people and making deadly drugs, we saw him escape in the Breaking Bad finale.

More important is what life he’s escaping to, what kind of person he’s escaping to become. Jesse was, flaws and all, the show’s criminal conscience. He was tormented over killing; he was motivated to protect children; when he resisted Walt’s schemes, his older mentor manipulated him into playing along.

The two partners reunite near the end of El Camino, in a scene the movie dangles for fans like a reward for sticking around. In the series timeline, it’s somewhere in Season 2; they’ve just completed the marathon meth cook in the episode 4 Days Out. Walt still thinks he’s about to die of cancer, and he tells Jesse that he envies him: “You didn’t have to wait your whole life to do something special.”

It’s a pensive moment. It’s also a reminder that Walt was always full of it. Up to the bitter end, he believes he is the hero of his own life - much like the chunk of the fan base who approved his murderous exploits - and insists that he’s proud of the “something special” he did: “I was alive.”

So what I think we hoped for Jesse — what I hoped, at least — was for him to find a better way to feel alive than Walt did, and to make it stick. El Camino does not entirely give us this. He gets a Coward of the County Western arc, twice surrendering his gun to bad men who break his will, then finally winning his freedom in a shootout. The beaten cur gets his mojo back by pulling the trigger. Walt would be proud.

That’s not to say the ending felt false. This is who Jesse is right now; he was sprung from hell just hours ago. He does not have a spare cheek to turn at the moment. (Though it’s worth pointing out that the finale arguably gives him more powerful closure by having him refuse to shoot Walt, despite his fury, when Walt urges him to.)

But that’s why I wonder if a more interesting film would have picked up with Jesse in Alaska. That story might have avoided being a Breaking Bad cover band by jumping ahead and changing up its rhythms, much as Better Call Saul found new moral angles on its subject by delving into the past. Instead, El Camino has more in common with the narco-drama half of Saul, which hunts the Breaking Bad desert to unearth origin stories and hide Easter eggs.

Maybe Gilligan didn’t want to foreclose too much future story in case Saul flashes forward before it ends. So we get Jesse driving off one more time, not screaming and manic as at the end of Breaking Bad but heading, we hope, in the general direction of peace.

And who knows? We may yet meet Jesse Pinkman down the road someday. He may have been Hoovered up out of Albuquerque, but so long as there’s a willing audience, Netflix can find you anywhere.

I liked/ didn’t like El Camino because... Tell t2@abp.in