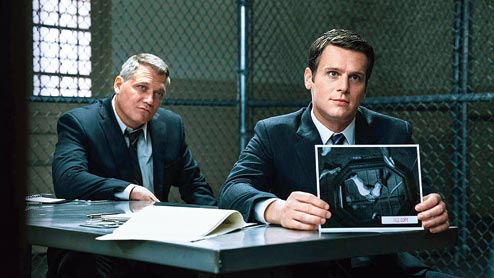 If you are one of those people who are obsessed with true crime stories, especially the ones focusing on violent crimes then don’t think twice about delving into the 10-episode first season of Netflix’s Mindhunter. The show is based loosely on the book Mindhunter: Inside the FBI’s Elite Serial Crime Unit by John E. Douglas — a former special agent and unit chief in the United States Federal Bureau of Investigation (FBI) and one of the first criminal profilers — and author and filmmaker Mark Olshaker. It delves into the why and how of these crimes through a landmark study of some of the most violent criminals in the US.

WHAT IT IS NOT

If you are looking for a police procedural, then this ain’t one. Yes, there is the FBI. Yes, they help local police departments nab violent murderers. But this is more about the work that goes behind the magic/psychic tricks that we often see — like in The Mentalist — where the detectives miraculously profile the killers and their motives, seemingly from random pieces of evidence. And, unlike police procedurals, it is not the solving-a-crime-an-episode deal. Most of the criminals we see on the show are already behind bars.

IT’S GOT THE CREDENTIALS

The fact that the show is based on a book by the man who is hailed as one of the first criminal profilers — someone on whom many famous fictional characters were based, from Jack Crawford in Silence of the Lambs to Will Graham in Hannibal, to Jason Gideon and David Rossi in Criminal Minds — should be good enough reason to watch the show. The show takes us through the development of “profiling” as we know it today, the growth of the Behavioural Science Unit of the FBI, where we see  the birth of terms like “serial killers” and “organised” and “disorganised” criminals and that makes it a must for true crime fans.

But if that is not enough, especially for those who aren’t into true crime, the fact that David Fincher and Charlize Theron are among the executive producers of the show should convince them.

And with Fincher, who has to his name psychological thrillers like Se7en and Gone Girl, directing four of the 10 episodes, you can rest assured it will be totally worth your while.

MEET THE WORLD’S MOST DEPRAVED MINDS

Unlike shows like Dexter or The Fall or Hannibal, there is not a lot of blood and gore on the screen, except for some black-and-white crime scene photos of victims and trophies. But before you sigh in relief, let me warn you that the violence here is even more disturbing because it is often read out from police reports that are so matter-of-fact about the tiniest of details that it leaves you uneasy. Even more disturbing is when the same details are described by the killers themselves, sometimes, like in the case of Ed Kemper, the Co-Ed Killer, without a hint of remorse.

The show’s lead characters — Holden Ford, based loosely on John E. Douglas, and his partner Bill Tench, based on real-life FBI agent Robert Ressler — starts interviewing some of the most violent killers, trying to get into how their minds work, their psychology, the triggers, the motivators, the patterns, or as Douglas in his books called it, “signatures”.

In the 10 episodes of the show, the two interview Ed Kemper, who abducted, killed, dismembered and violated eight women between 1972 and 1973; Monte Rissell, who raped and killed five women between 1976 and 1977; Jerry Brudos, the “Shoe Fetish Slayer”, who killed at least four women between 1968 and 1969; and Richard Speck, who raped, tortured and killed eight young nursing students in 1966. While Charles Manson has come up again and again, he still hasn’t made an appearance on the show.

It is not easy to sit through the interviews, watching these killers doing their best to manipulate Holden and Tench. And some of the scenes are downright difficult to handle; Speck throwing a bird he was stroking through the interview at the fan before walking out is just one of them, and it’s not the worst.

IT’S HEAVY ON THE CONVERSATIONS

Be warned that 90 per cent of the show is conversations — in prisons, in a basement office in Quantico, in airplanes, motel rooms and cars.

With each interview that Holden and Tench do, you realise that Holden is getting too involved and making an empathic connection with the killers. Tench, on the other hand, you realise, is getting more and more uncomfortable with Holden’s methods, is struggling to separate work from home and feeling the repurcussions. Tench and Holden’s conversations with Wendy Carr, a professor of psychology, brings out the clash between the academic and practical.

And all of this makes for fascinating television, though a tad bit slow for non-true crime fans. But don’t worry, Holden and Tench actually do solve a couple of crimes using the information they learnt during the interviews and that still feels like magic.

IT’S GOT SOME CLASS ACTS

You’ll remember Jonathan Groff from Glee, and it seemed impossible that he would have been able to pull off the role of a work-obsessed FBI “blue flamer”, but he turns out a fantastic performance. So much so that you start feeling uncomfortable when he starts crossing the line from objective to obsessive.

Anna Torv from Fringe adds the much-needed female voice to the show, of which there is little, which could be one complaint about the show, had the book not clearly spelt out how male-oriented the FBI was during that era.

One of the acts worth mentioning is Cameron Britton’s chilling performance as the Co-Ed Killer; he not just looks similar, if you watch original interviews you’d realise he’s got the mannerisms down pat too. Creepy!

DIFFERENCE BETWEEN THE SHOW AND THE BOOK

Well, the book is obviously far more clinical than the show, which has dramatised it a lot to make it a better watch.

The interactions between Holden and his girlfriend, Bill Tench’s family life, actually add another depth to the characters that are not there in the book.

But what the book does that the show fails to is give us an idea how suspects are profiled. How knowing the victims is important to the profiling of the criminal, how if most of the victims are white, then it is almost always the case that the perpetrator is white too, how you can understand the age and whether it is a first-time killer or an experienced one depending on how defined the “signature” is. Again, fascinating stuff.

One big difference is that while I was able to watch six episodes of the show at one go (only stopping because I had to sleep), I had to take breaks between reading the book because it can be very, very disturbing. I am yet to get back to the book after my latest break. Thank god, season one of Mindhunter ended well within what I had read.

Why are you hooked to Mindhunter? Tell t2@abp.in