Advertisement
Home / Entertainment / Darlings presents ugly truths, but always with a twinkle in the eye

Darlings presents ugly truths, but always with a twinkle in the eye

The film is a story of emancipation and a mother-daughter relationship tale; that final twist uniting Shamsu and Badru in a way that they hadn’t ever been before 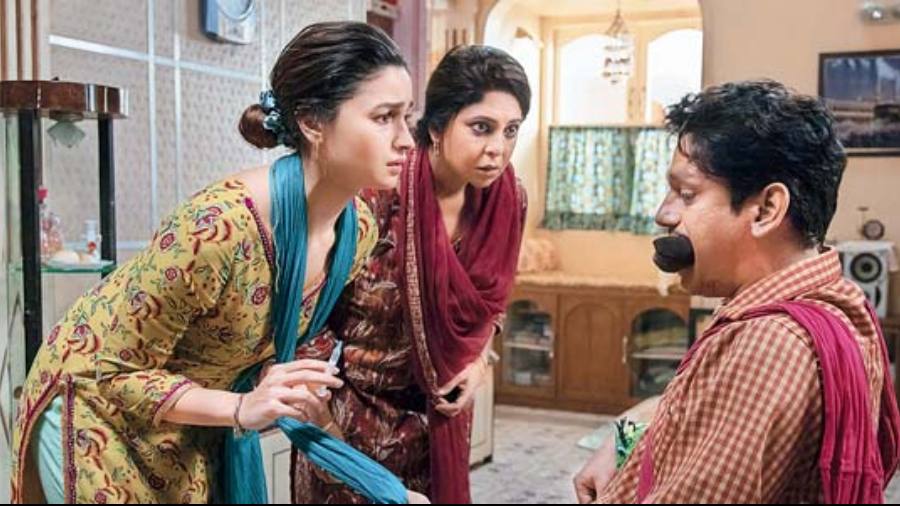 This line from Darlings, slimily uttered and with the intention to manipulate, chillingly reminds one of that toxic blockbuster called Kabir Singh. Except that in this film, a toxic man is not being glorified, even though he’s enabled for a sizeable part of the film. And then he’s not.

Even in its most comedic moments, Darlings is an uncomfortable watch. For an intense feeling of dread, and even a tinge of sadness, pervades the film.

“A sugarcoated quinine” is how Shefali Shah, who steals the show despite the presence of a stellar Alia Bhatt, had told The Telegraph recently when describing Darlings. She couldn’t have summed it up better.

I have seldom been so conflicted about my feelings for a film. There were parts, in fact many parts, in Darlings that made me want to laugh out loud, but I was always subconsciously aware that the comedy was originating from a deeply dark place.

Darlings can be triggering. The facade of normalcy that follows an episode of domestic violence in which both partners — he sweetly threatening, she desperately trying to hold on to her marriage — will feel relatable to many, even those who perhaps have been unaware of it so far.

For men like Hamza, played with slimy scariness by Vijay Varma, are everywhere. Hamza is a master manipulator, a gaslighter-in-chief, who blames his violent streak on alcohol. Married to the petite Badrunissa (Alia) for three years, Hamza’s frustration at work during the day finds an easy target in Badru, who is slapped around like a rag doll. It’s not easy to watch. Badru, who is madly in love and believes, as is common in our country, that a child will set Hamza right, tries everything in the book to keep her marriage ticking.

What’s even more alarming is how, in a very familiar way, this abuse is normalised in the cheek-by-jowl Byculla milieu that Badru and Hamza live in. Her mother Shamsunissa (Shefali) takes one look at Badru’s injured neck and asks her, “Ab kya kiya tune?” instantly shifting the blame of the violence on to the daughter. It’s not something that Darlings condones or condemns, it just presents facts.

In fact, it’s Shamsu, living next door to her daughter, who constantly urges her to leave her husband or even get rid of him. Badru, with hollow eyes, laughs it off, going to the extent of telling Shamsu that just because she had an irredeemable marriage herself, it doesn’t mean her daughter will have one too. Zulfi (Roshan Mathew) is the film’s moral compass, unconditionally coming to the aid of mother and daughter when they need it the most.

Badru makes peace with her fate. And then one day, she doesn’t. “Pehle chot bahaar lagti thi. Ab dimaag mein lagne lagi hain,” she says. The words hit home, whether you have been a victim of domestic violence or not.

The scenes of Hamza being ‘tortured’ by the mother and daughter have invited knee-jerk outrage, but as usual, they are being seen out of the context of the film. The violence against the man in Darlings — which, to be honest, pales in comparison to what the woman has to go through —  could actually be cathartic for many.

It’s also where the film’s comedy largely stems from. For Badru and Shamsu are not seasoned kidnappers or killers. They go through the cat-and-mouse paces of covering up their ‘misdeed’, often landing in foot-in-the-mouth situations. Shamsu gets the best lines, and Shefali, the consummate performer that she is, runs away with the film.

The tonality of Darlings changes every few scenes, with debutant director Jasmeet K. Reen ensuring that the film defies being boxed into a genre. ‘Dark comedy’ would perhaps be a lazy generalisation, because this is also a story of emancipation and a mother-daughter relationship tale; that final twist uniting Shamsu and Badru in a way that they hadn’t ever been before.

Darlings may not find takers across every demographic, but that final shot of Badru enjoying her tub of popcorn as she goes solo in a movie theatre will bring a smile on everyone’s face. For Darlings presents ugly truths, but always with a twinkle in the eye.