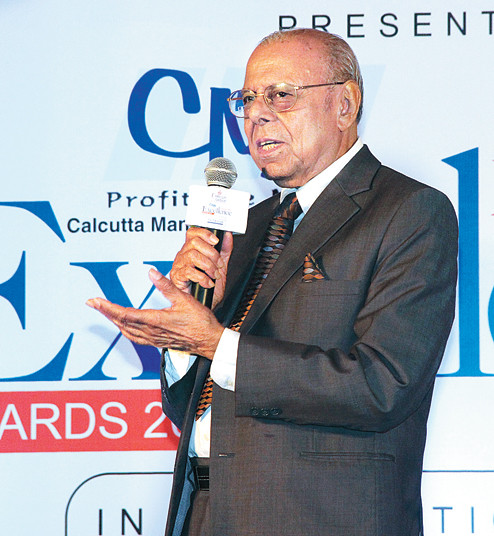 It was raining awards at The Topaz, in Hotel Hindusthan International on March 17. The reason? It was the CMA Management Excellence Awards 2017 presented by Camellia Group in association with The Telegraph, where eight achievers from Bengal were felicitated for commendable work in business, public service and other fields. The third edition of the awards was organised by the Calcutta Management Association, a management body founded in 1957.

Aloke Mookherjea won the CMA Lifetime Achievement Award. “I try to share whatever I’ve learned in the corporate world with young students. It’s been a long journey, over four-and-half decades, and I’m doing my best to share all my experiences,” said the past chairman of WBEIDC Ltd (WEBEL Group).

Veterans and newbies, all winners, posed for the t2 camera after the awards show at The HHI. (Emerging Leader Award winner Gyanesh Chaudhary had left before the end of the awards ceremony.)

“As a house maker, it is my dream to provide houses to everyone in the country. We are now trying to do affordable housing through government support so that more and more people can buy houses. CMA is a very prestigious organisation and it is an honour receiving an award from them,” said Sushil Mohta, managing director of Merlin Group, who received the Business Leadership Award.

“This is a great recognition and I’m deeply encouraged to receive this award from my peers. My advice to young professionals is to never stop learning,” said S.M. Datta, after receiving the Hall of Fame Award. The veteran corporate leader still wears many hats, one of them being the non-executive chairman of Castrol India Pvt. Ltd.

Gyanesh Chaudhary (left),  CEO and managing director of Vikram Solar Pvt. Ltd., won the Emerging Leader Award. “I think the major challenge that one faces as a leader is looking at change, to create a vision and to garner the trust of your people. Communication is very important as a leader,” said Gyanesh, after collecting the award from Rajat Banerjee (right), zonal head, east operations, Pernod Ricard.

“It is not possible to do anything without passion. Unless and until you are passionate about your work, you will not be able to succeed,” said C.K. Dhanuka (left), the executive chairman of Dhunseri Group, who received the Business Leadership Award from Dilip Jaiswal, managing director of HHI, and N.N. Framjee, past president of CMA.

Alok Patnia, founder and CEO of taxmantra.com, won the Innovation Excellence Award. “I have this saying — every night you die and every night you’re reborn as an entrepreneur; every day you fail and win, but the next morning you forget everything and start again. This is what keeps me motivated,” said Alok.

“Here in India we have so much talent. I hope we can open our eyes and see the need of providing a good education to all our children. We have the greatest gene bank in the world, the cleverest children who are far better than anybody else,” said Sister Cyril of Loreto Sealdah, who received the Public Service Award for her work in educating underprivileged children from N.R. Datta of Camellia Group.

Calcutta-based instrumental band Fingerprints were the first to take the stage and kept the audience entertained with unique musical instruments like cajon and darbuka along with keyboards, saxophone, bass and lead guitar.