‘Our kitchen was messy, But now, as we open our restaurant, we promise to serve you in style’ 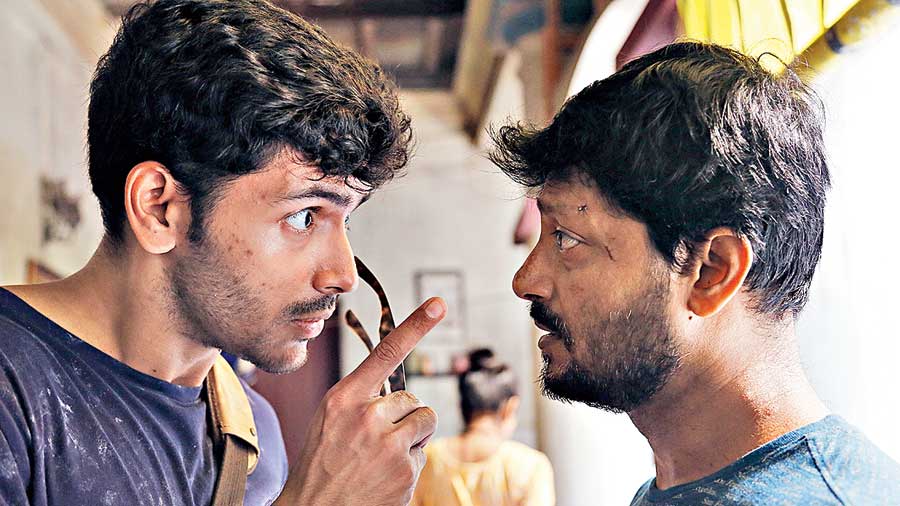 During The Bong Connection we did not have the funds for hiring a choreographer. We decided to shoot Pagla hawa ourselves. My theatre colleague and dance teacher Swaroopa Ghosh chipped in to train the actors to move in rhythm. Raima (Sen) passed with flying colours but Shayan Munshi was unabashedly hilarious. It was a crazy circus in Bolpur, with myself dancing for no reason with a whistle in my mouth, Mainak Bhaumik, my associate, trying to control me, Indraneel Mukherjee deciding to choreograph himself, Neel Dutt screaming “action”… and the fiasco was getting beyond control. But it still is one of the most exciting, energetic, honestly enjoyable shoots of my life till date where everyone involved was eager to give their best irrespective of their designated jobs. That energy or fun was reflected in the final work, which you loved despite all its rough edges.

During my theatre days years ago, it was that same raw energy and passion that made my version of Bertolt Brecht’s Happy End so exciting. Chanda Dutt, my wife, playing the gangster boss, Fly, not only sang with elan and choreographed her own song but also decided to teach my lead actor to tap dance. I tried to teach a completely frigid actor to dance like Fred Astaire. Swaroopa Ghosh tried to sing like Ella Fitzgerald. However, the result stunned both the critics and the audience.

My journey through musical theatre and cinema has always been filled with a crazy energy to break grounds. To me, an actor has to know how to sing, dance, do his or her own action stunts. I come from a theatre background that believes in these basic requirements. During my days in Berlin in the early ’80s, working for a theatre company, I had the opportunity to see a lot of theatre, including those at the Berliner Ensemble, to realise the true potential and ability of an actor. Sadly, our environment has lost that tradition or even the desire to make attempts no matter how crazy it seems. As I stumbled through my career in cinema in the mid ’80s, I realised a serious actor will never be given a comic or a negative role, because the mainstream industry is constricted.

I moved into direction and singing where I could indulge in the fun of breaking boundaries. I could cast fresh talents and push their limits. Luckily I found exciting young financiers who were adventurous enough to allow me to indulge in the fun of making movies and not think of box office all the time. It’s the sheer joy of enjoying the work we do. I still recall with relish the sheer fun of creating good actors out of fresh talent and good technicians out of amateurs. On stage, through cinema. Stumbling, failing, breaking grounds, making mistakes, making enemies, finding friends, losing many… but never losing the zest to do something different. Trying very hard never to be senile.

In 1991, when I was invited to a programme called Cinema In The US, to six American cities, we had a party at a pub in Los Angeles. Our entire team comprising film people from all over the world were overjoyed at meeting Spike Lee, the latest rage in town. Myself and an Egyptian director were more concerned about an old man sitting alone at the bar. We found him highly familiar but couldn’t figure out who he was. I mustered up the courage to walk over and say, “Sir, are you Mr Robert Wise?” The man enquired whether we have seen his work. I told him that I have seen The Sound Of Music 16 times and West Side Story at least a dozen. He treated us to three rounds of drinks and said, “They don’t make musicals like that any more”.

As the release of my Shaheber Cutlet, an attempt at a true musical, draws near, I recall my crazy journey through the years of theatre and cinema where music and comedy was critical. A dear friend, Sanjit Chowdhury, cast me in his first ever food film in Bangla, but the project did not take off despite having a terrific script. It led me to write a completely different food film. By the time I realised that it was turning out to be a musical also, Pratim D. Gupta released his Maacher Jhol. I had to step back and wait because the Jhol had worked and created a stir. Instead I ended up making Ami Ashbo Phirey. The songs of the film worked immediately. The film got attention much later through OTT. By the time Finally Bhalobasha was over, I felt it was about time I went back to my Cutlet.

After the cast was finalised, Neel, my music director and I decided that the actors will have to sing their own songs. There will be no professional singers. Inspite of having had huge emphasis on songs in all my films, I realised for the first time that I had never made my actors sing in Chalo Let’s Go, Madly Bangali or Ranjana..., where they were playing characters who were singers. A late realisation but it did dawn. Here, in Shaheber Cutlet, none of the characters are singers. Yet, since the film attempted at being a conventional musical, I was certain that a chef, a hoodlum, a suburban girl, a hack lawyer, a refugee, a gangster, a bum… all need to sing themselves and dance, if necessary.
finding magic

How can you think of The Sound Of Music without recalling Julie Andrews’s voice. Or that of Rex Harrison in My Fair Lady. Or even that of Sophia Loren in The Man Of La Mancha? So started a huge, hilarious effort in the music recording studio, where apart from Suprobhat, Ambarish Bhattacharya and myself, the rest were not even bathroom singers. But tireless effort from Neel and the sheer enthusiasm of Arjun Chakrabarty, Anindita Bose, Sritama Dey, the songs came out perfect. Kanchan Mallick had to be pulled out of various hiding places in the studio and dragged to the microphone till he delivered magic. Believe me, apart from the usual mixing process, Neel did not use a pitch corrector.

When it came to choreographing the song sequences, I decided to do it myself. The reason being, I could not think of any professional choreographer in my city who would be able to make the actors move with the rhythm yet allow them to perform naturally. For instance, Arjun needed to decorate a cafe without “dancing” in the orthodox sense. He would have to act naturally in rhythm yet sing at the same time. Suprobhat had to break the cafe and destroy the set-up while moving in rhythm and singing at the same time. Like in any decent stage opera.

Three gruelling days in the desperate, humid heat of July last year, we shot one of the songs. The 65-year-old me tried to teach dancing and improvise at the same time. Tripping, falling. Tiyash Sen, the cinematographer, gave his best to keep the focus perfect. I kept bumping into his easy rig. During tea break I kept arguing as to why Tagore’s brilliant operas like Shyama or Chitrangada have been reduced to dance dramas. Shot-takings were like a theatre workshop. Even Chanda ended up suggesting dance steps for Sritama… I am sure the rest of my unit watching us saw a similar circus like that in Bolpur during Pagla hawa. The difference was that all the actors were ready to do anything to attain my vision and somehow melted into the pot with their bodies to deliver something I have never achieved in cinema before.

During the cooking scenes, the circus was even more hilarious. Since both Neel and Tiyash are great cooks, they kept barging into the acting since none of my actors could cook even a boiled egg.

When I, a passable cook, did a cooking-cum-song sequence, Tiyash kept cutting the shot to remind me that the salt should be put later or the onions earlier. After taking my shot, he first tasted my cooking and then declared whether he was satisfied with the focus puller!
The reason behind writing this is to share the fact that to me, in any collective creative art, the raw energy or passion of every member becomes crucial where the director needs to be outrageously unabashed and not cold or clinical. Somehow I feel blessed for having been able to keep choosing a much younger team that keeps my innocence alive. The clashes of the generation gap is inevitable and can lead to highly volatile situations.

It is finally up to me to not allow the Titanic to sink. I am extremely proud of Suprobhat, who I strongly believe is a talent to reckon with in Bengali cinema. I am grateful to Arjun for breaking out of his mould and delivering differently. I am proud of introducing yet another fresher, Sritama Dey, who will surely surprise you.

I am also certain that Kanchan Mallick and Ambarish Bhattacharya will make you laugh and touch your hearts. I recall having a huge fight with my unit towards our final days of shoot.

Yet, after the last day of shoot, I returned home to cry helplessly since the shoot was over. I think we have cooked a really special meal for you with chaotic energy, hard work and much more love.

The proof of the pudding lies in the eating. So, now it’s for you to judge how good or crunchy the Cutlet is.

Our kitchen, like any genuine kitchen, was messy. But now as we open our restaurant, we promise to serve you in style.