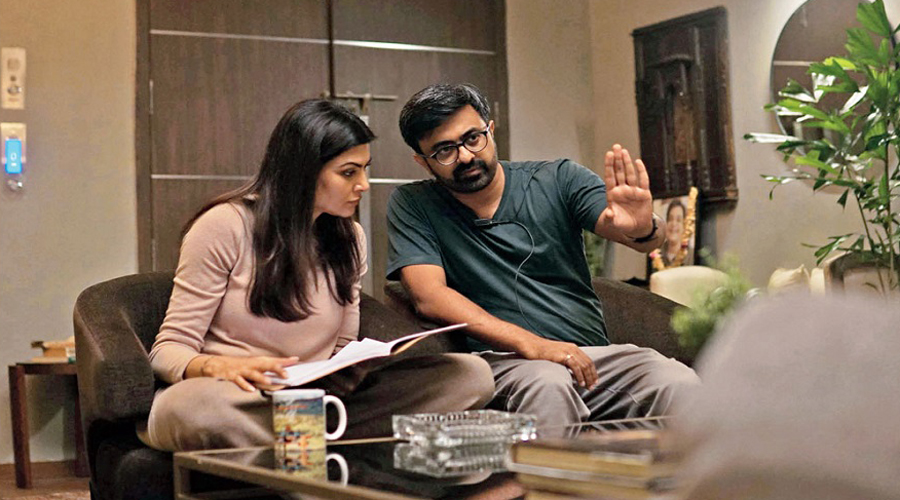 Aarya, with a superb Sushmita Sen leading a strong ensemble cast and telling a story that both thrills and resonates, has had a massive number of takers ever since it dropped on Disney+Hotstar in mid-June.

The Telegraph caught up with co-director Sandeep Modi (Ram Madhvani and Vinod Rawat are the other directors) for a post-release chat on Aarya and the way forward.

Congratulations for the super success of Aarya. The journey to making the show, especially in post-production, is quite a story in itself, right?

It is. We finished filming on March 5. By March 15, we were planning to look at a rough outline of our post-production work. We wanted to release it during the IPL. It was a tough deadline in any case, and we were wondering how to make it happen. But in a couple of days, reality started dawning on us. We didn’t know how we were going to do the entire post-production in a lockdown situation. In a way, editing is easier... it’s a person sitting with a computer, but it involves so many people’s opinions. Anything becomes 5x times more difficult when you have to watch a buffering video, a live edit... what would possibly take a minute when you are in the same room with the editor, took five hours when we were trying to do it virtually or over the phone.

I also had to be cognisant of the fact that everyone was fighting a battle which may have been tougher than mine. But as a team, we had a long chat and we mulled over two options. Either we do this or we don’t. We decided to try doing it. It meant reinventing whatever we knew about post-production, all of us went out of our comfort zones. We didn’t have a mixing room for the sound, we didn’t have a grading room, we wondered how the dubs would happen.
But necessity is the mother of invention. Actors used their phones as microphones, we sent them some high-end software to install, we asked them to pick the quietest corner of their house, they would dub and we would listen and give them instructions over a Skype call, the sound engineer would link in from somewhere, so would I and the dubbing coordinator... it was sheer madness. Namit Das (who plays Jawahar) had to dub his lines after 2am because that’s when a dog in his lane would stop barking after the whole day! (Laughs) And most of our actors were in different corners of the world... Ankur Bhatia (who plays Sangram) was in New York, Vishwajeet Pradhan (Sampath) was in Australia, Jayant Kripalani (Zorawar) was in Calcutta, Sohaila Kapur (Rajeshwari) in Delhi, Priyasha Bhardwaj (Soundarya) in Assam!
But now that it’s worked out, we look back and say, ‘Okay, we can see some of the flaws, but overall, it’s been a satisfying experience’. Especially when we see that these tough times created a piece of art called Aarya. We’ve learnt some wondrous things on this journey. After film school, this has been my biggest learning.

Was there a point when you felt you couldn’t pull it off?

I think it happened once every day! (Laughs) But someone or the other would pull everyone up and we eventually did it together as a team.

What’s the best thing you’ve been told about Aarya?

Most people saying that this is a show that they could watch with their families. I thought for a show on OTT, that’s a big compliment because we don’t really make much content these days that one can watch with family. We were just trying to put a value system out and we were very conscious of the choices we were making in terms of what to show on screen. Families watching together as a result of those choices was the best thing for us. I read a tweet yesterday where someone said they watched the kissing scenes on the show with their parents... they fitted in so well with the context of the larger show that they didn’t feel uncomfortable watching it. OTT is a platform that allows you to express, but we didn’t want to misuse that freedom. We just showed only what served the story.

What’s been significant is that though the show is called Aarya and has Sushmita Sen frontlining it, everyone is recognising it as an ensemble piece. There are 23 other characters on the show, each with their own arcs.

Also, I was very proud of that ACP Khan (played by Vikas Kumar) track. The LGBTQ angle is very subtly and sensitively put in, and people are reacting to how well we managed to pull off the scene at the cop station when his boyfriend comes to meet him there. We presented it like any other scene where a wife brings a husband his lunch dabba at work. That was the sbrief for everyone present in that scene. It’s a scene that has very few words, but for me, it’s a torchbearer for where I want the world to be. That it was pointed out to me after the show dropped really reaffirmed my faith that the audience does catch the nuances one puts in, more often than not. We tried to put in a lot of things from life into the show.
I know some people have had an issue with the use of the Bhagavad Gita but we tried to use it with the best intentions. We have got trolled for this, as well as some other things, but these are choices we made and if we don’t make such choices, how are we going to be called creative?

What worked for me was that the three kids are people in themselves and not just incidental to the plot...

Aarya is, of course, an adaptation of Penoza (a Dutch web series) and even in the original, justice was done to all three parts. None of them were supporting parts or just put in there to add to the visual of a happy family. We borrowed a lot from there and we operated from the standpoint that this is a show which is more about family than crime. The show, at the core, really explores how the death of the father (Tej, played by Chandrachur Singh) turns the family upside down. The only thing that me and the writers, Sandeep Shrivastava and Anu Singh Choudhary, can take credit for is fleshing out the Veer-Pallavi track from what it was in I. We wanted to use Pallavi’s (Gargi Sawant) track to show Veer’s (Viren Vazirani) coming-of-age, who is technically trying to be the man of the house and becomes his mother’s ally in a way. Adi (Pratyaksh Panwar) played a big role in unmasking the killer eventually and Aru (Virti Vaghani) also had an interesting arc.

What was the idea of using Rajasthan as a backdrop? I liked the fact that you didn’t use it as a touristy, cliched landscape to tell the story...

Thank you for saying that. The idea of Penoza has been with Ram (Madhvani) for nine years, but he didn’t know how to do it because the original is set in Amsterdam, which has a flourishing drug trade and provided cultural relevance to the plot. Once, Ram was travelling in a train with Aamir (Khan) for the shoot of a music video for Satyameva Jayate and he saw white flowers on the fields all around and he was shocked when told that it was opium, just growing there freely. It then struck Ram that he could root the story in this idea.

He first tried to make a film on it, but when I joined the journey of Aarya, we discussed where we could set it... Rajasthan and central India came up, as well as the north India belt where opium is legally cultivated. We all intuitively felt it had to be Rajasthan because first, we wanted a visual flourish without having to focus on it, where you keep something in the backdrop and yet it has a character of its own. Also, the royalty aspect worked for the story. We wanted to film Rajasthan with an insider’s eye, not from the point of view of a tourist. That also suited the fact that the story is so internal. But this story could be set anywhere, honestly.

So is Aarya 2 in the works?

I was just talking to Sushmita about this. We are hoping as hell that the universe conspires and that more and more people watch the show so that we can make all five seasons that Penoza had, and more. The story and the character is so strong that it naturally leads to many more seasons. I am hoping we have something concrete soon. We are looking at making not just the next, but the next and the next and the next! (Laughs)