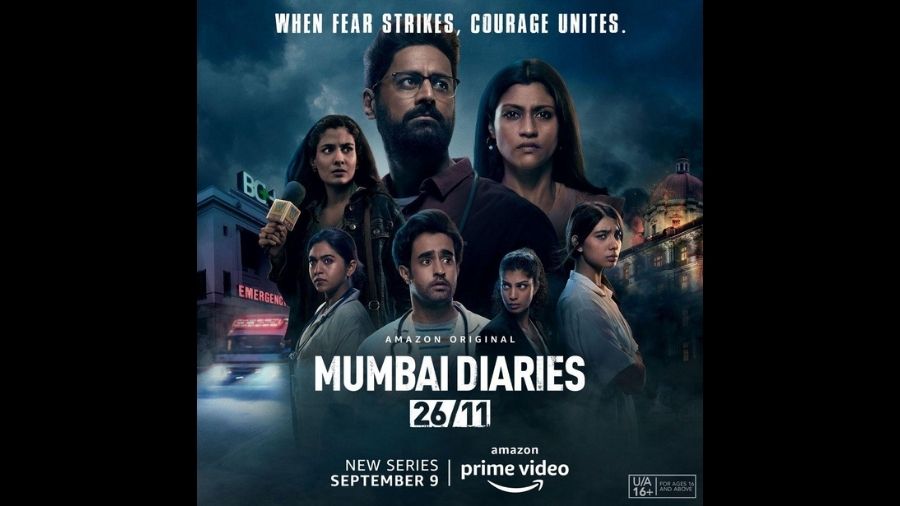 The trailer launch event held at the Gateway of India paid homage to the bravery, commitment and selfless sacrifice of Mumbai’s frontline warriors like doctors and police force.
Amazon Prime Video
Our Bureau   |   Mumbai   |   Published 26.08.21, 09:39 PM

Amazon Prime Video on Thursday launched the trailer of its upcoming fictional medical drama set against the backdrop of 26/11 attacks -- Mumbai Diaries 26/11.

The trailer launch event held at the Gateway of India paid homage to the bravery, commitment and selfless sacrifice of Mumbai’s frontline warriors like doctors and police force. Titled Sahas ko Salam, the event celebrated the invaluable sacrifices of Mumbai’s frontline heroes in the presence Maharashtra minister Aditya Thackeray, Aparna Purohit (Head of India Originals) director and creator Nikkhil Advani along with the producers and the cast of the series.

Mumbai Diaries 26/11 is a fictional edge-of-the-seat medical drama that is set against the terrifying, unforgettable night that on one hand ravaged the city but on the other hand also united its people and strengthened their resolve to stand resolutely against any adversity. The series is an account of events that unfold in a government hospital and explore the challenges faced by the medical staff at the hospital as well as other first responders across the city of Mumbai while dealing with a monumental crisis. Mumbai Diaries 26/11 will launch on Amazon Prime Video on September 9 across more than 240+ countries and territories.

Created by Nikkhil Advani, produced by Monisha Advani and Madhu Bhojwani of Emmay Entertainment, and jointly directed by Nikkhil Advani along with Nikhil Gonsalves, Mumbai Diaries 26/11, depicts the untold story of doctors, nurses, paramedics, and hospital staff who worked tirelessly to save lives during the terror attacks that devastated the city on November 26th, 2008.

During the event, Thackrey said “The spirit of Mumbai is undeniably resilient, but behind all that resilience are the many untold stories of the bravery and sacrifice of our frontline workers. Doctors, Nurses, Wardboys, Police, BMC workers – all of whom have been the real heroes that have kept the city running during times of crises. Today, I am happy to be a part of Sahas Ko Salam – an event that honours the bravery of our frontline workers and witness the trailer of Mumbai Diaries 26/11, a series that pays tribute to these very workers. It is heartening to see such content bring made and I would like to congratulate the makers and the cast of the series and Amazon Prime Video for bringing such stories of bravery to life.”

“At Amazon Prime Video, we consistently strive to push the envelope in storytelling by bringing narratives that are authentic, rooted and reflective of the times we are living in.” Aparna Purohit, Head of India Originals, Amazon Prime Video India said.

“We are thrilled to expand our slate of originals with a one of its kind, emotional and captivating medical drama, Mumbai Diaries 26/11 that gives a unique perspective to the events of November 26, 2008 – a tragedy that shall always be etched into the minds of the people of Mumbai. But what we had also witnessed then was Mumbai’s undying resilience and the incredible courage of selfless warriors to bring back normalcy. This spirit is what defines Mumbai, and we are proud, beyond words, to pay an ode to some of these special people whose relentless contributions keep us safe amidst all adversities. As we pay tribute to our unsung heroes, frontline workers and first responders, we hope that this story of struggle, bravery and courage will resonate with audiences across the world," she added.

“Mumbai Diaries 26/11 offers a different perspective to the dreadful night of 26/11 which hasn’t been explored on-screen so far,” shared director Nikkhil Advani.

“A tribute to the bravery of the frontline workers and the unsung heroes, the series offers a perfect blend of emotions and drama through a versatile ensemble of actors who have put in their heart and soul to bring to life this story. Narrated from the lens of the first responders i.e., doctors, nurses, interns and ward boys, the show transports the viewers into the corridors of the Bombay General Hospital, unfolding what transpired there on that fateful night. It is a series we are immensely proud of,” he said.