Advertisement
Home / Entertainment / All or Nothing: Arsenal: 6 reasons why the Prime Video docu-series is a must-watch

All or Nothing: Arsenal: 6 reasons why the Prime Video docu-series is a must-watch 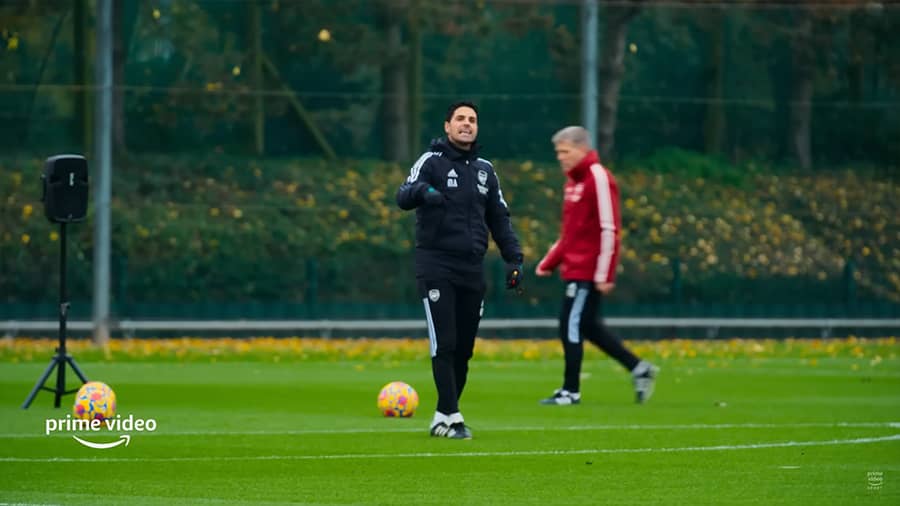 Candid interviews of star players, never-seen-before footage from the dressing room, debates over management decisions and more — Prime Video’s new docu-series, All or Nothing: Arsenal, takes you behind the scenes of the 2021-22 season of English football club Arsenal.

The first three episodes of the docu-series, which started streaming on Prime Video on August 4, are full of giddy optimism and strike an emotional chord with Arsenal fans. However, they also focus on the fact that the popular North London club could not live up to the expectations of fans in their last season.

Here are six key highlights from the first three episodes of All or Nothing: Arsenal that make it a must-watch:

Mikel Arteta: Man of the moment

Right from the first episode of All or Nothing: Arsenal, it is clear that the series will heavily focus on the club’s young manager, Mikel Arteta. The three episodes explore Arteta’s coaching methods amid intense pressure from the fanbase and media.

The former Arsenal captain has enjoyed the backing of the owners of the club after taking over in the middle of the 2019-20 season. The Spaniard’s coaching philosophy and man management become a prominent theme in the early episodes as the club goes through a string of poor performances.

After losing the first three games and suffering one of their worst starts in Premier League history, the 40-year-old Arteta attempts to inspire his young team with an emotional speech about his short-term battle with heart problems as a child and how he considers this Arsenal team his new family.

In Episode 3, Arteta is shown experimenting with training methods to prepare his young squad to face Liverpool at their homeground, the Anfield stadium. The Merseyside team’s stadium is known to create the most unnerving atmosphere for the opposition. Arteta plays Liverpool’s club anthem You’ll Never Walk Alone on huge speakers at the London Colney training centre to make his players understand what they’ll face. Arsenal lost the match 0-4, but Arteta’s method of instilling confidence in his young team was much-talked-about.

Over the years, Arsenal has been heavily criticised by fans and media for its “ineffective” and often questionable transfer policies. Since the heyday of Arsenal’s former manager Arsene Wenger, the team has failed to show intent during the transfer windows. However, the 2021-22 season saw a significant shift in this approach as Arsenal emerged as the highest spender in Europe to recruit six new players.

Manager Mikel Arteta and technical director Edu Gasper have been shown to be extremely busy during the summer transfer window as they attempt to rebuild the squad. The club added midfielders Albert Sambi Lokonga and Martin Odegaard, defenders Ben White, Nuno Tavares and Takehiro Tomiyasu, and goalkeeper Aaron Ramsdale to the squad.

The first two episodes spend significant airtime on recruitment, which initially sparked debates over the lack of experience in the young and enthusiastic squad. This window, however, helped Arsenal to kick-start its rebuilding process.

The return of ‘King’ Henry

One of the biggest surprises of the series was the interviews of club legend Thierry Henry. Arsenal’s record goalscorer is regarded as one of the greatest players to have ever played in the Premier League.  His interviews feature in all three episodes as he talks about what it means to be an Arsenal player and the historic significance of the pioneering club that opened its door for black people.

The Frenchman also talked about two of Arsenal’s current youngsters — Bukayo Saka and Emile Smith Rowe — who have come through the club’s famed Hale End academy. He believes that Saka and Rowe are the true representatives of Arsenal and both have the potential to become elite players. Henry also describes the pressure of playing for an elite club like Arsenal and how it affects the players

In his interview, Thierry Henry also briefly talks about the importance of the North London derby against arch-rival Tottenham Hotspur. Derby days are the most precious days of the season for players as well as fans. After a dismal start to the campaign, Arsenal hosted the Spurs at the Emirates Stadium for the first derby of the season.

Amazon ‘All or Nothing: Arsenal’ teaser clip, of Arsenal chief photographer Stuart MacFarlane giving an emotional pre-match team-talk to the squad before their 3-1 win over Tottenham in the North London Derby.

Before the kick-off, Arteta invited Arsenal chief photographer Stuart MacFarlane to give a speech to players. MacFarlane, a lifelong Arsenal supporter who has spent over 30 years as the club photographer, gave an emotional pre-match team talk to the squad, reminding them of the importance of the derby to fans and how much it would mean for them to get a win. Arsenal went on to win the match 3-1.

The youngest squad in the last Premier League

Arsenal had the youngest squad in the Premier League last season with the average age of the squad being 25. This approach of relying heavily on young players has been a major talking point of the last season. The series explores this aspect, with utmost attention to the development of Bukayo Saka, Nuno Tavares, Emile Smith Rowe and Kieran Tierney.

The young Scottish left-back, Tierney, joined Arsenal from Celtic in 2019 and has been an integral part of the squad since. During a heartfelt interview in the third season, Tierney described the hardships of leaving home at a young age to pursue his career and also described the toll it took on his mental health.

The Kroenkes and the disconnect

Arsenal Football Club is owned by Kroenke Sports & Entertainment and run by the Kroenke family. Fans of the club have been vocal against the owners’ limited involvement and alleged ‘lack of care’ which led to the infamous ‘Kroenke Out’ campaign. All or Nothing: Arsenal has taken this point into consideration and has included interviews with Josh Kroenke, the son of owner Stan Kroenke, to discuss the disconnect between fans and the club hierarchy.

Josh speaks about the need for change and urges fans to trust the process. However, he fails to point out the shortcomings that led to yet another disastrous campaign for Arsenal. The American businessman accepts the mistakes of the club and promises to learn from them.

Release dates of the upcoming episodes and more