A tribute to mark the birth centenary of Satyajit Ray

What happens when 17 stars get together to make a film in North Bengal & Darjeeling. The Telegraph brings you exclusive moments from the shoot of ABBAR KANCHENJUNGHA 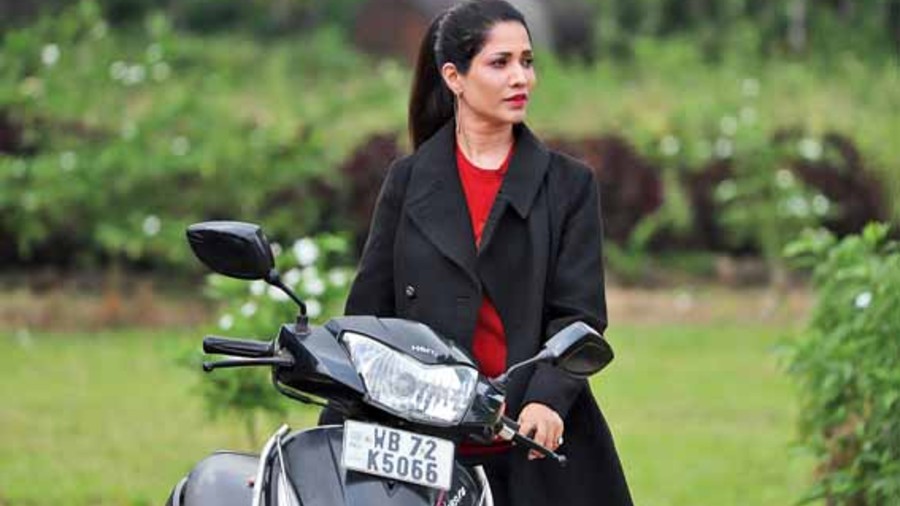 Arpita and Tnusree in a fun mood after completing an intense scene at the Samsing bungalow. Arpita said: “For me, the shoot was one of the most significant events of my life! It was like a battle against corona! Raajhorshee and producer Akshatt made sure that everyone was comfortable, on and off the sets — especially during the long outdoor shoots. It was great to shoot in the open and breathe unpolluted air in Darjeeling.” On Tnusree’s experience, she said: “It was a very unique experience because it was a great team. We had a lot of fun and the weather was very good.”

Fun and frolic during the shoot
Anirban Chakrabarty

Rahul who plays Debesh, a politician and one of the brothers of the Dev family, shoots a scene in Samsing. Rahul said: “It was a memorable shoot especially because of the very special people who were involved. We had a lot of adda. It was a very close-knit group, which will reflect on screen.”

Devlina Kumar as Angelina, Anindya Chatterjee as Sunayan and director Raajhorshee De chill after a fun scene at the Lali Guras riverside. Anindya said: “We were looking forward to the outdoors, especially Lataguri and Darjeeling with the Kanchenjungha in the backdrop. The best part was the cast and catching up with my colleagues. It was a brilliant experience.” Devlina said: “One of the best outdoor experiences for me. Raajhorsheeda is awesome. There were so many talented actors around.”

Moments from the shoot
Anirban Chakrabarty

Saswata Chatterjee plays Sumitro Chatterjee, a journalist from Delhi, and the son-in-law of the Dev family. In the film, this is his first visit to the bungalow in Darjeeling. Saswata told t2: “The biggest personal takeaway from the shoot was that I could see the mighty Kanchenjungha all through the day. From morning till sundown, the peaks were visible. I have been to Darjeeling many times but this was by far the best viewing. The cast and crew gelled very well. We had a lot of fun. I liked the plot too.”

Sohini Guha Roy as Atisha at the Samsing bungalow. In this scene, she talks to Sunayan for the first time. She said: “It was nice going back to my hometown, north Bengal, amidst the hills and tea gardens. It was a whole lot of adda with so many senior artistes. It was a great team which made me very comfortable.”

Snapshots from the shoot
Anirban Chakrabarty

Richa Sharma shoots her introductory scene in the film. Richa as Surita has a pivotal role in the film. She actually had to practise quite a bit to ride the two-wheeler. Richa told The Telegraph: “It was wonderful. The locations were stunning. And every day after shoot, we used to chit-chat and have fun. I loved my character. I made a lot of friends.”

Why Kanchenjungha? Did the inspiration come from the turmoil of a particular family with Darjeeling as the backdrop or the magic of Satyajit Ray that was woven, presenting the cluster of peaks that remain side by side, and yet are very different from each other? How different is it from Ray’s Kanchenjungha?

I wanted to tell a story of a family which still believes in magic and miracles, still celebrates the nostalgia of being together, eating together and spending Christmas together. Films like Kanchenjungha, Utsab, A Death in the Gunj inspired me a lot to tell this story. I was trying to get out of the monotony of sets and set my story in a place that itself celebrates the nostalgia and what better place than Darjeeling. I started writing the story and finally Padmanabha Dasgupta completed it with the screenplay and dialogues. It’s completely an original story celebrating the values of a family that no longer exist in today’s society and as Kanchenjungha was the most important part of the story, we thought of naming it Abbar Kanchenjungha as a tribute to 100 years of Satyajit Ray.

How was the casting done? Did it have anything to do with the cast chosen by Ray in the original movie?

I generally believe in ensemble casting because it is a treat for the audience to come and see all their favourite stars in one film. The shoot becomes more of fun and picnic. And we all look forward to the evenings post pack-up. In this film there are 17 actors and everybody is so powerful in their performances and there are three debutantes in the film — Ranieeta Dash, Sohini Guha Roy and Deboshree Ganguly (elder sister of Subhashree Ganguly). Once the audience sees the film they will understand how brilliant and aptly the casting has been done.

Ray used local music through native children as a running tone at various parts in the movie. How is music used in your project?

Ashu Chakraborty is the music director of the film. The music is very different from the original Kanchenjungha. We have four songs in the film . The title track is written by me and sung by Anupam Roy, the other original number is written by Durba Sen and sung by Ujjaini Mukherjee, the other two are Tagore songs sung by Jayati Chakraborty and Rupankar, who is also playing a pivotal character in the film. One of the Tagore songs is very uncommon and has never been used in any film so far. A few actors too have sung in the film. We are using it also. A few popular English songs are also a part of the background score.

Colour, especially the costumes worn by the actors, played a very important role in bringing out the characters in Kanchenjungha. Do we get to see use of colours similarly in your film?

The styling and costumes have been done by Anirudhha Chakladar and National Award winner Sabarni Das. They have done wonders. In this film, costume is a very important part of course and every actor has his or her own signature as far as the costumes are concerned. Colours play a very important role in every scene and we all sat and discussed every palette before we finalised the costumes.

Note: All the people had masks on and followed Covid protocols. They had taken their masks off only during the shooting and photo sessions