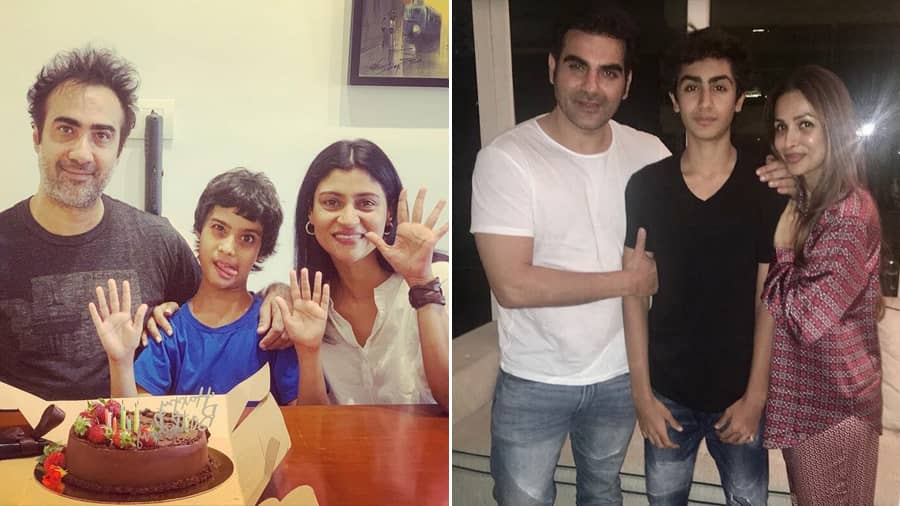 Can you truly be friends with your ex? Possible. Some of our Bollywood couples have proved that true friendship remains, even when love fades away. Parting ways doesn’t always mean that you cannot stay in touch with your ex and these actors made sure that their children don’t have to suffer in the process.

Saif Ali Khan and Amrita Singh divorce came as a shock when they split after 13 years of marriage. But that hasn’t stopped them from successfully co-parenting their children, Sara Ali Khan and Ibrahim Ali Khan.

Both Saif and Amrita have an amicable relationship with their children as well as with each other. Saif’s present wife Kareena Kapoor has a lot of warmth for his children from his first marriage — she often posts pictures of Sara and Ibrahim with their dad on her Instagram handle.

After 14 years of marriage and a divorce, Hrithik Roshan and ex-wife Sussanne Khan remain friends and are supportive of each other. The former spouses have been setting the standards quite high when it comes to being exes, especially with regards to parenting Hridhaan and Hrehaan. From going on holiday trips together as a family to attending special occasions with the boys, Hrithik and Sussanne keep up a united front as parents despite moving on in their personal lives.

It took many by surprise when the divorced couple Aamir Khan and Kiran Rao were seen attending Karan Johar’s 50th birthday bash together. Aamir and Kiran announced their separation in 2021 after 15 years of marriage. They have a son, Azad, and have remained friends after their separation. Kiran even co-produced Aamir Khan’s recent release, Laal Singh Chaddha, the Indian adaptation of Tom Hanks-starrer Forrest Gump.

Bollywood’s Chaiyya Chaiyya girl Malaika Arora and her actor husband Arbaaz Khan’s divorce after 18 years of marriage led to a lot of rumours. But the duo stayed away from the blaming-and-shaming game. In a recent Koffee with Karan episode, Arjun Kapoor, who’s dating Malaika, revealed that he and Malaika had initially decided to keep their relationship private out of respect for her family. Malaika and Arbaaz are now co-parenting Arhaan (they are sometimes spotted receiving or dropping off their son at the airport) and share a cordial relationship with each other as well as their families.

The Rock On actor and hairstylist Adhuna Bhabani first met on the sets of Dil Chahta Hai, directed by Farhan, where Adhuna was the hairstylist. They got married soon after. After 16 years of marriage, the couple parted ways in 2017.

The divorced couple have remained friends and co-parents to their daughters, Shakya and Akira. Adhuna also shared a post on her Instagram to warn trolls from talking badly about Farhan’s marriage to Shibani Dandekar.

Konkona Sen Sharma and Ranvir Shorey got married in 2010, and went their separate ways five years later. The two, however, have remained friends and co-parent their son Haroon and also celebrated his 10th birthday together.