Over 1.47 crore voters are eligible to exercise their franchise in the electoral contest largely seen as 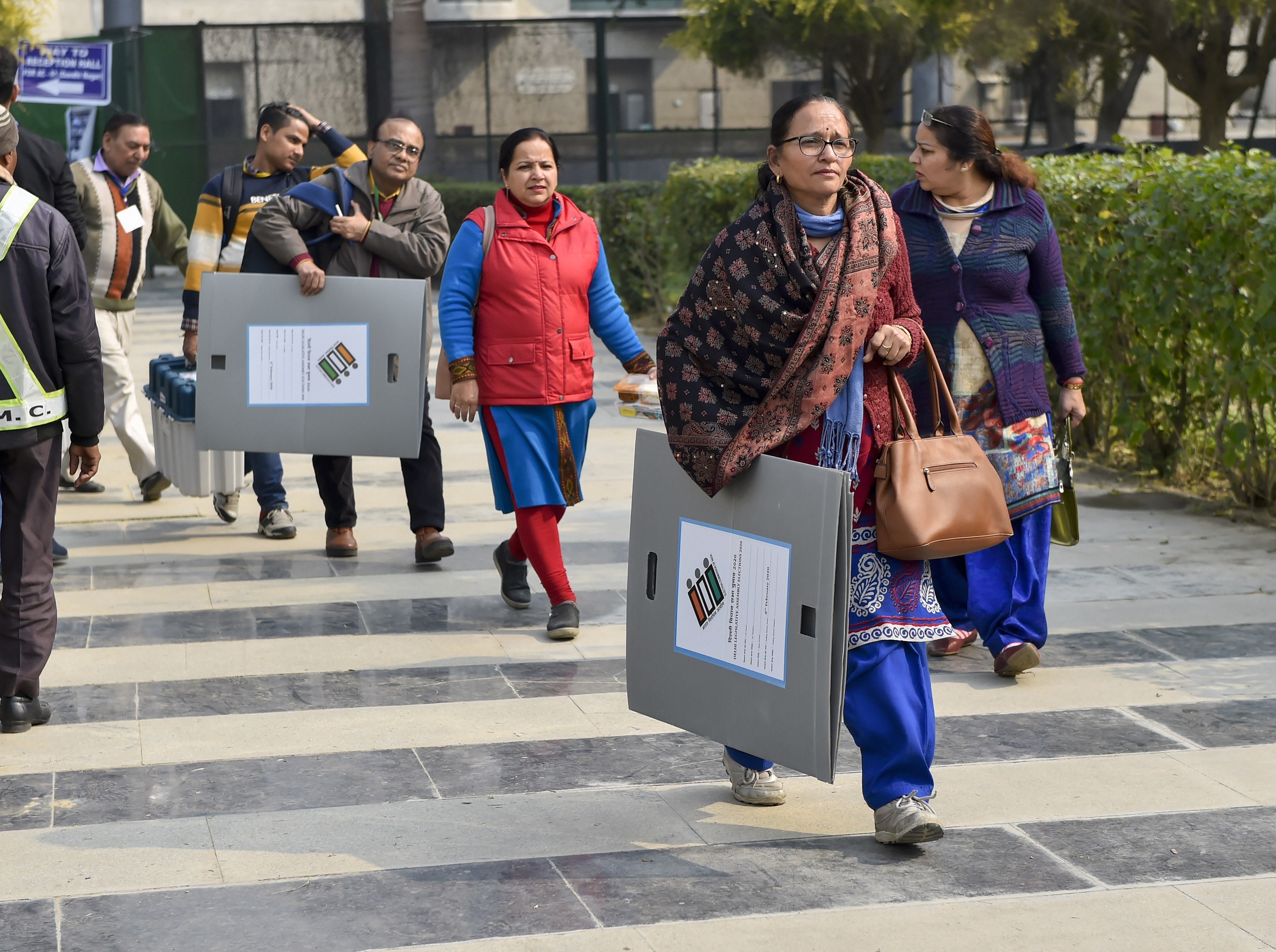 Polling officers carry EVM machines and other polling material as they leave for their polling stations on the eve of the Delhi Assembly elections at Akshardham in New Delhi, Friday, February 7, 2020
PTI
PTI   |   New Delhi   |   Published 07.02.20, 12:22 PM

Riding on tech-savvy elements like QR codes and mobile apps, poll authorities have geared up for the elections to the 70-member Delhi Assembly on Saturday, making tight security arrangements across the national capital and keeping an extra vigil in Shaheen Bagh and other sensitive polling areas.

Over 1.47 crore voters are eligible to exercise their franchise in the electoral battle for Delhi, which is largely being seen as a triangular contest among the ruling AAP, a spirited Congress and the Opposition BJP, which has campaigned very aggressively ahead of the election.

In view of the ongoing anti-CAA protests in Shaheen Bagh, the Delhi CEO Office has put all five polling stations in the area under the 'critical' category, and confidence-building measures are continuously being undertaken to reassure voters, officials said.

Delhi Chief Electoral Officer Ranbir Singh reiterated that the area is under 'tight vigil' and 'there is no obstruction' in areas where poll activities will be conducted, so voters will face no problems.

The bitterly fought high-octane campaign that lasted for over three weeks ended at 6pm on Thursday, just 38 hours before the start of voting for the high-stakes Delhi Assembly election.

There are 672 candidates in the fray for 70 Assembly seats.

Tight security arrangements have been made across the national capital and police force and paramilitary personnel have been deployed.

Special Commissioner of Police (Intelligence) Praveer Ranjan, had earlier said 190 companies of Central Armed Police Forces (CAPF) will be deployed as part of the security measures.

This is nearly four times the number of CAPF personnel deployed during the 2019 Lok Sabha polls, he added.

There are 13,750 polling booths, besides one auxiliary booth, located at 2,689 locations across Delhi.

'As far as critical polling stations are concerned, there are 516 locations and 3,704 booths in that category,' Singh said.

Besides police security, polling stations falling in the 'critical category' get paramilitary cover. Activities will be monitored through webcasting, he said.

Police and election machinery are on 'extra vigil' and assessing the situation all the time across the national capital, he added.

Shaheen Bagh falls in the Okhla Assembly constituency. The area has become the epicentre of protests against the Citizenship (Amendment) Act (CAA) in the national capital and the agitation has been thrust by political parties into a poll issue.

Hundreds of people, including women and children, have been protesting since December 15 at Shaheen Bagh against the CAA and the National Register of Citizens.

Poll authorities had met protesters recently and encouraged them to vote on the polling day.

'The 2020 Delhi polls will be tech-driven with greater use of technology elements like mobile apps, QR codes, social media interface, seeking to enhance the experience of all categories of voters, before polling or on the voting day. And we are trying to make the best use of it,' he said.

Electors can carry smartphones at polling stations in 11 assembly constituencies for accessing QR codes from the voters' helpline app in case they have not brought the voters' slip to the booth.

Delhi has 70 Assembly constituencies and one constituency in each of the 11 districts will have this tech-driven facility.

According to Singh, focused campaigns were carried by his office to reach out to different sections of voters, aiming to break the 'urban apathy' of the electorate.

Special campaigns were carried out in 30 constituencies which had seen lower turnout in 2019 Lok Sabha polls.

Singh hoped that the twin-edged strategy of more thrust on use of technology complemented with massive campaigns in the run-up, will lead to a greater turnout than in 2015.

A mega, multi-domain outdoor campaign is being carried out by the Delhi CEO Office to bring large number of electorate to the polling booths, besides jingles on all major FM stations.

The ruling AAP is going into the Delhi election with the hope to repeat its stellar performance in the last assembly polls, while the BJP, which bagged all seven seats here in the Lok Sabha election, will be aiming at expanding its vote share in the national capital.

The Aam Aadmi Party had got 54.3 per cent votes in the 2015 Assembly polls, while the Bharatiya Janata Party got a vote share of 32 per cent and the Congress managed to bag just 9.6 per cent of the total votes polled.

The AAP will fight the polls on a depleted strength of 60 MLAs as it had to concede one seat to the BJP in the subsequent bypoll, while six of the lawmakers were disqualified over joining other parties.

Candidates in the spotlight