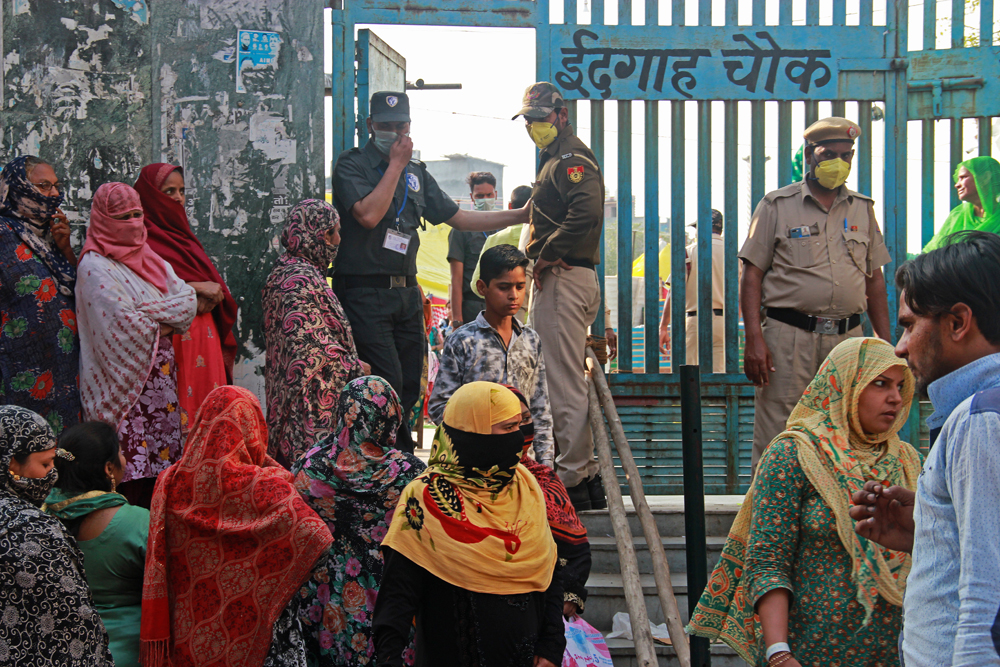 The looming threat of a coronavirus outbreak at northeast Delhi’s Idgah relief camp has officials in a bind.

The camp, an initiative of the Delhi Wakf Board aimed at helping those displaced during last month’s violence in the city, would be badly hit if the pandemic reached the community transmission stage.

Earlier this week, the camp management restricted visitor access and began a sensitisation drive. On Thursday evening, health volunteers could be seen working in the camp even as announcements were made reminding people to wash their hands regularly.

In the cramped spaces under the tents, people could be seen huddled together and children playing around. In one corner, doctors and medical staff could be seen wearing masks and giving medicines to people.

The Delhi government has put curbs on the gathering of people, limiting it to 50 persons, in view of the pandemic. But the relief camp with temporary tents houses more than 800 people living in close quarters.

The authorities reportedly decided to dismantle the camp on Thursday to stem the spread of the virus; however, people refused to leave.

Most of the families at the camp have come from Shiv Vihar, one of the areas worst affected by the violence. While only a few families have moved back, most people are still afraid to return to their homes.

In Shiv Vihar’s Phase 7, people regularly gather outside their gutted homes and shops and spend the entire day there before leaving for the camp as it turns dark.

A few days ago, 70-year-old Ali Ahmad had told The Telegraph Online that he didn’t have the courage to spend the night in Shiv Vihar.

Ahmad spends his days on a chair outside his two burnt shops and leaves the area after evening prayers at the local mosque, which was also burnt by rioters.

“Police have to make the place habitable for them. They have to ensure the safety of the people. Law and order is their subject. We have police coming regularly at the camp and assuring people, asking them to go back,” said Nishab Khan of the Wakf Board.

“If they have to go, they have to go. Moreover, the government doesn’t want more than 50 people at any place,” said Khan, adding that people can’t remain at the camp indefinitely.

Ahmad is not alone. Apart from fear, those whose houses were burnt don’t want to leave the camp. Local residents working with the Wakf Board in facilitating relief alleged that local leaders have been provoking people to oppose the dismantling of the camp.

The Wakf Board, explained camp’s management committee’s Kaleem Khan, has offered to bear ration and rent expenses for three months. It has also promised to repair and reconstruct damaged houses.

“Some of the displaced have got some relief, especially those who lost their businesses. Right now, the effort is to give them some immediate relief,” said Khan.

He said that the only option would be to remove people forcefully if the community outbreak of the coronavirus occurs.