In response to a complaint, the Police Complaints Authority has filed a case against police personnel for protesting outside headquarters 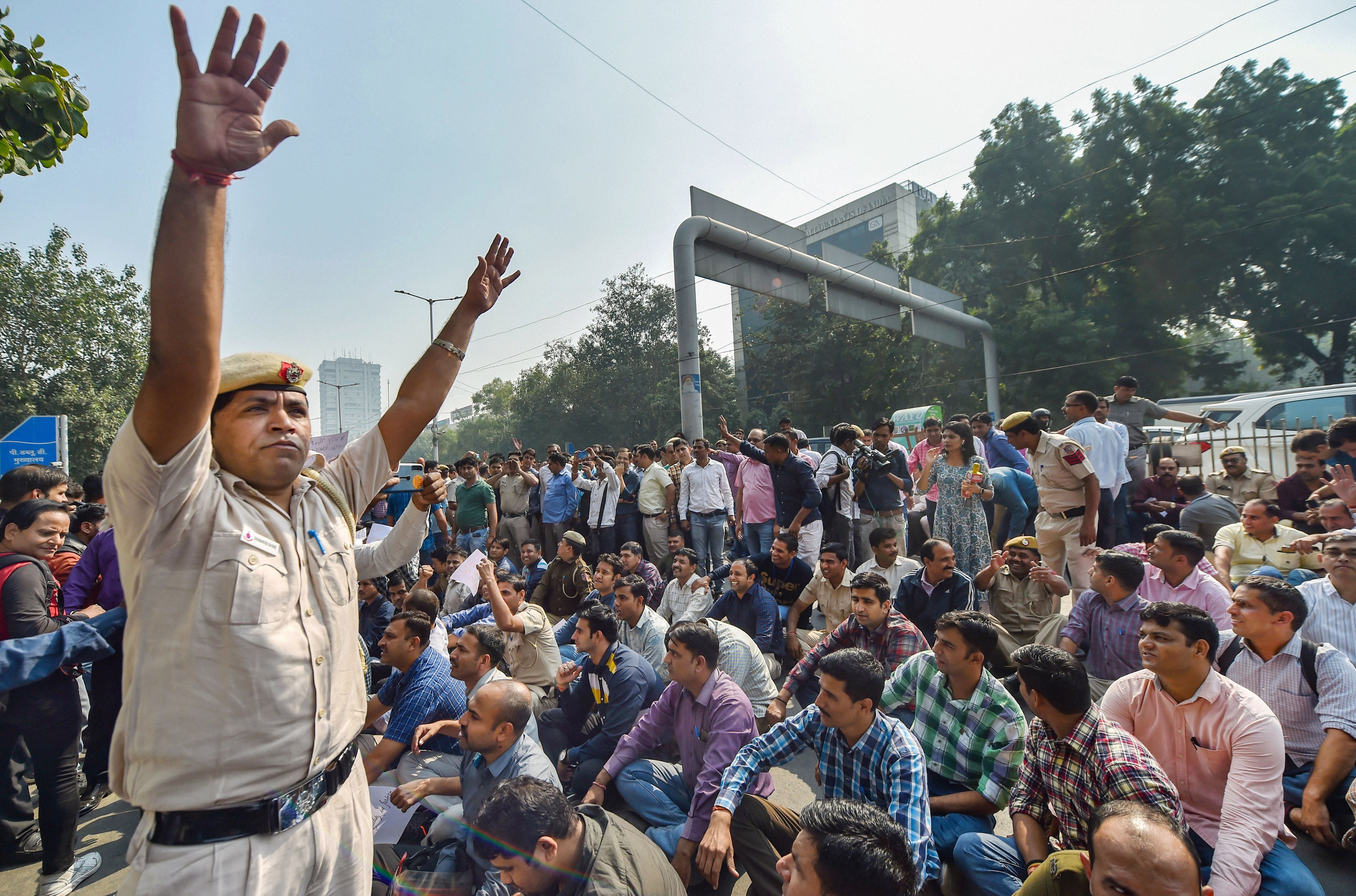 Police personnel gather outside the police headquarters in ITO to protest against the assault on policemen following clashes with lawyers at Tis Hazari court and alleged thrashing of a cop in Saket, in New Delhi, Tuesday, November 5, 2019.
PTI
|   New Delhi   |   Published 16.01.20, 02:15 PM

The Police Complaints Authority has filed a case against police personnel for protesting outside the police headquarters on 5 November 2019. The said pretest took place three days after lawyers clashed with cops at Tis Hazari on 2 November.

A complaint registered by of a group of lawyers, citing several sections from the Police Forces (Restriction of Rights) Act, 1966 (hereafter Act) led to the case being filed. The complaint asked that a day’s pay cut be levied, and IPS associations which passed resolutions against the lawyers back in November 2019 be disbanded.

In the complaint, lawyers Mohit Gupta, Narvinder Thakran, Utkarsh Singh, Shashi, Mithilesh Jaiswal, and Shovit Singh highlighted that the accused were in violation of the Act, which prohibits “organizing or otherwise participating in any protests”, an action punishable by a maximum two year sentence.

“Police Officers/Officials appeared and gathered in uniform (with or without service arms/batons) seemingly while being on duty for the protest, thereby causing financial loss of one day salary received/receivable by them from the taxpayers money on account of patent absenteeism from duty, as per Section 24, Delhi Police Act, 1978,” the complaint read.

The complaint also accused the police personnel of using “filthy language” during their protest and on social media sites.

“Protesting Police Officers/Officials not only used filthy language but threatened openly the entire class of profession i.e. lawyers and made deliberate and crystal clear remarks against the hon’ble judges and learned judicial officers by criticizing the order dated 03.11.2019 passed by the hon’ble High Court of Delhi as being partisan,” the lawyers argued.

Videos of the violence during that erupted at Tis Hazari were circulated far and wide on social media, and clearly documented how the incident escalated into fisticuffs and arson (several vehicles were set on fire).

Since then a committee headed by a retired high court judge has been convened to look into the matter. The police were also directed to not file any cases against the lawyers till the proceedings of the case are complete.

Delhi Police has now made news once again with this development, in what has been a series of recent incidents where their role and actions have been severely criticized.

May it be the orchestrated attack on the Jamia Millia Islamia campus on15 December 2019 or their complete apathy, inaction during, and facilitation the 5 January 2020 mob attack and violence at JNU. 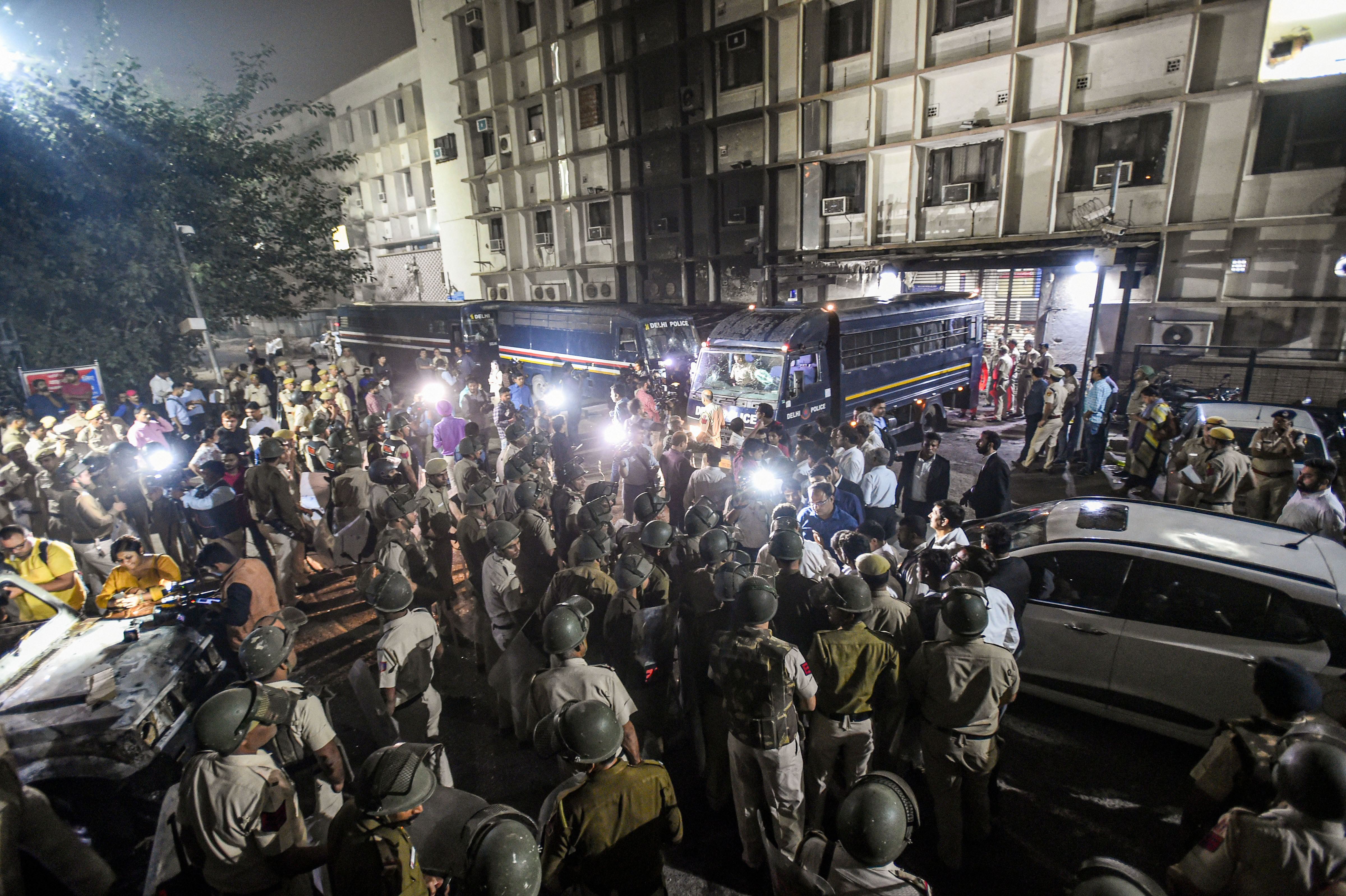