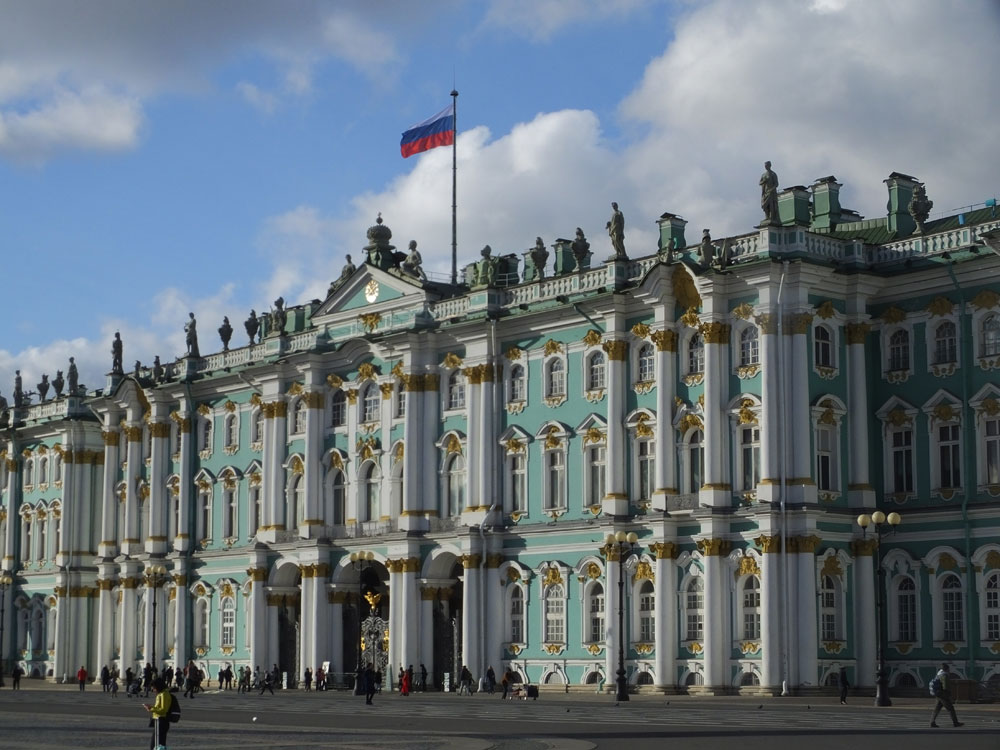 The sweep of these buildings only highlighted the pathos of the hawkers crowding the pavement. There they stood at 3° Celsius, ill-clad, selling fruits, toys; all elderly. Later, I learn that seniors in new Russia do not get social security, one of those things they have only Putin to thank for.

I could not help but compare St. Petersburg with Moscow — in terms of crowds and ambience. Moscow is perpetually humming, the streets are busy and there is a joyousness in the air. St. Petersburg has this film of grey over it that just won’t give. And yet, it used to be Russia’s political and cultural capital for over two centuries. Even today, it is the second most important city of the Russian Federation.

The broadness of the streets and the corresponding emptiness add to an inexplicable sadness. A feeling that becomes more intense when clouds take over the sky, their hold unrelenting. I salute the Russian people. To think they spend almost half the year in such depressing climes. Would these men and women know that there is a place in this very world where crops grow four times a year?

At the centre of the southern city is the Victory Square. In the northern city, it is the Palace Square. Its centrepiece, the Winter Palace, is an extravagance in stone, a continuum with an elaborate façade and intricately carved figurines of characters from Greek mythology. For the first time, I find a resonance with Moscow.

St. Petersburg is located on an estuary. Canals, distributaries and islands combine to conjure a gorgeous cityscape. River Neva slashes through much of St. Petersburg and forms a beauteous rippling border for the northern city.

On one side is the Winter Palace, on the other side lies the Peter and Paul Fortress. Located on Zayachy Island, the fortress houses a cathedral, a defunct prison and residential quarters that now host exhibitions depicting the city’s history and more throughout the year. Zayachy is, in fact, the kernel that eventually grew into present-day St. Petersburg. The other neighbouring island, Vasilyevsky, was originally designed to be the administrative heart of the city under Peter the Great, Emperor of Russia in the late 17th century. This, too, is chock-a-block with excellent museums.

As it happens, in an unfamiliar place, the pattern inherent becomes apparent only gradually. By day three, I can understand the difference between the north and the south. The former was home to the emperors, the south is where the commoners lived. The differences are nowhere as rigid today, but the visual imprints endure.

The tsars created a city according to their plans and whims. The Communists had other ideas and while they fought the tsars, they didn’t destroy their legacy but they did create their own.

The soul of Russia is generous. To date, it contains the old and the new alike. For instance, the Kshesinskaya Palace. It is relatively modern. Built in 1904, it used to be the home of Mathilda Kshesinskaya, a ballet dancer and “one-time lover” of Tsar Nicholas II. Post the October Revolution, very briefly, it served as headquarters of the Bolsheviks; Lenin often gave speeches from its balcony. But as one era replaced another, as did one ideology another, the palace suffered no injury. Modern-day Russia has converted it into a museum, documenting its complete history.

On September 1, 1914, the imperial government renamed the city Petrograd, meaning Peter’s City. The German words “Saint” and “Burg” were expunged. Five days after Lenin’s death, on January 26, 1924, Petrograd was renamed Leningrad. It went back to its original name after the collapse of the Soviet Union.

Today, the city is as much Peter’s, as it is Lenin’s.

I got off the bullet train, Sapsan, on a sunny day. I had spent the last five days in Moscow and here I was in St. Petersburg. The hotel I was to stay in was very close to the Moscovsky train station — barely 600 metres — but I had so much luggage that I needed a cab to carry it all.

“The hotel is very near,” the young cabbie warned. He continued in accented English, “According to rule, you have to pay a minimum fare of 700 [Russian ruble], a big loss for you.” I liked the approach and decided to go with him.

The first day, I visited the southern part of the city. It turned out to be exactly as it is described in old books and films. A continuous stretch of Stalinist architecture: blockish brown stone buildings framed at the top by panels depicting human figures, apparently working-class heroes and martyrs.

Cotswolds is straight out of Grimm's fairy tales