Bridges made of tangled roots, water so transparent you can see underwater fish. Meghalaya is straight out of a fantasy 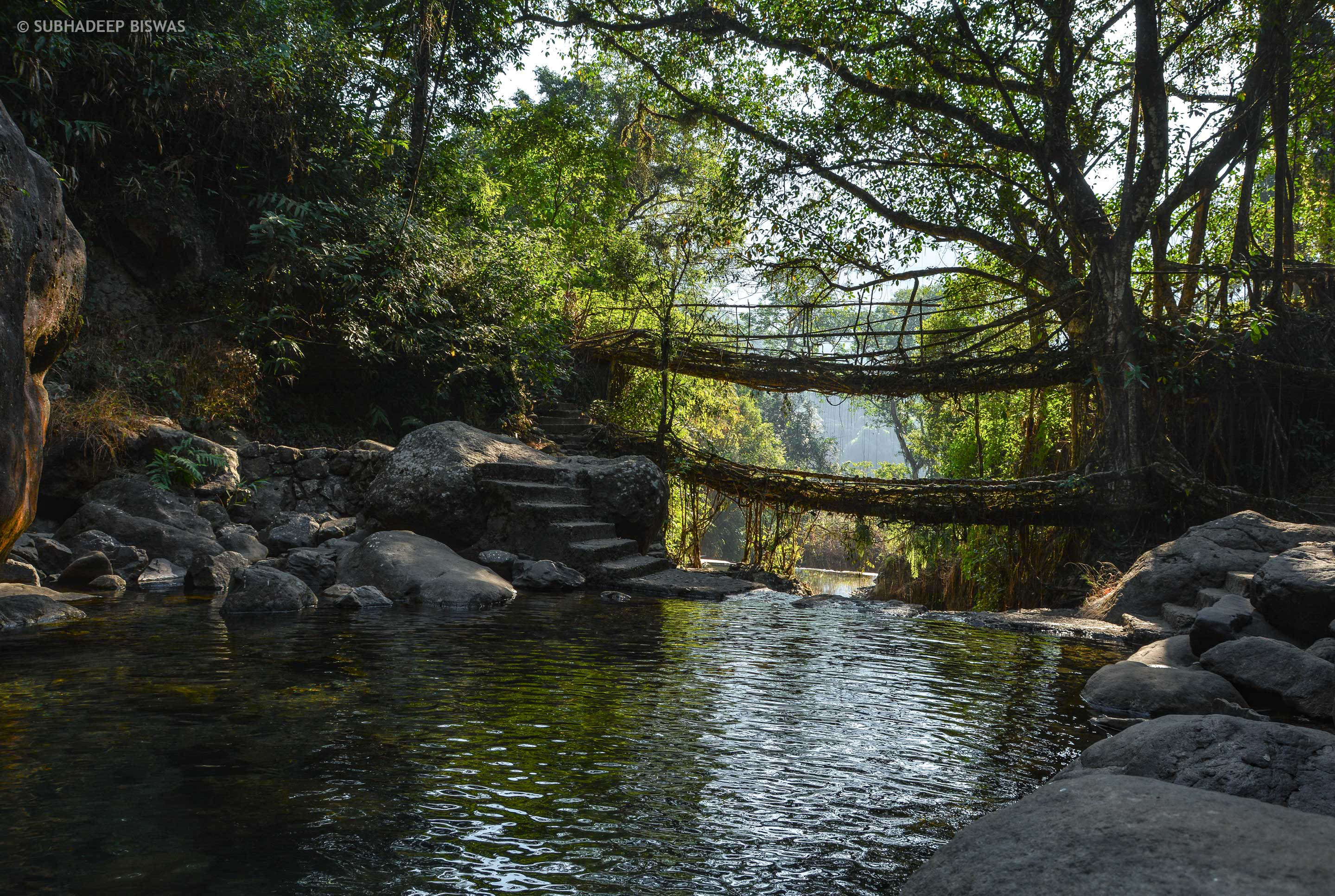 We walked for a few more metres to reach Nongriat village, where the double decker bridge is located. There was a counter for entry tickets. The path from the village took us only a few minutes and we reached the most awaited stop of our trip.

The trek to this bridge, and the Rainbow Falls, started at Tyrna Village. We spent the night at Greenland Homestay in Tyrna. After the tastiest food, we got ample rest for our long trek the next day.

In the deep dense tropical forests of Meghalaya lie some of the most astonishing man-made natural wonders of the world. The living root bridges, created by the members of the Khasi tribe who have grown them from rubber trees, are native to the region. The double-decker root bridge, the most famous one, is in Cherrapunji near the village of Nongriat. We decided to trek to it.

On one of the bridges, we stopped to look down at the turquoise water of the river below and the surrounding forests. The Umngot River is a completely clear waterway, quite uncommon in India.

However tiring the trek proved to be, the Rainbow Falls took out breath away. It is the tallest plunge waterfall in India. After we waited for an hour, the clouds cleared and the sun shone and revealed a rainbow.

On the first day, we reached Shillong and perched from the height, saw the valley at Laitlum Grand Canyon. It is the edge of a hill surrounded by green hills and valleys.

These bridges are made from the aerial roots of a rubber fig tree and supported with bamboos and thin cables. The root bridges provide a stable alternative to wooden bridges, which decay during the lengthy monsoon seasons. The tangled webs of roots are straight out of a fantasy. Some of these bridges are over 100 feet long and can easily support the weight of more than 50 people at a time.

The water body flowing below the bridge was so clear that we could see the fish. We sat there for a while, dipping our feet in the water.

After staying there for a while, we headed to the Rainbow Waterfall which took us almost two hours to reach. We navigated with the help of maps and directions from fellow trekkers at every turn. The path was a mix of ascents and descents along the hill side. We came across many other root bridges and suspension bridges on our way. There are several root bridges in the area but only a few are accessible for tourists.

It was a 3,500 step journey down the hill. A few villagers and a very few co-trekkers greeted us on our way. After descending through many patches of stones, we came across two hanging bridges over rain fed rivers.

The bridges were made with iron cable and supported with bamboo in some parts. It takes around 15 years to build one such bridge. It continues to grow stronger with time. The bridge shakes and swings above the river, making it quite an adventure.

The return journey was strenuous. The steps now looked like our stairway to hell. We paused every now and then to catch our breath and finally reached Tyrna after covering a total of almost 35 km.

But I still dream of the clear skies and crystal blue waters of the Meghalaya often.

One of the living root bridges on the way to the Rainbow Waterfall
Image: Subhadeep Biswas

A fisherman on the river
Image: Subhadeep Biswas

The fish in the water below the bridge
Image: Subhadeep Biswas

One of the many living root bridges we had to cross on our path
Image: Subhadeep Biswas