From snow leopards to tigers, chasing the big cats 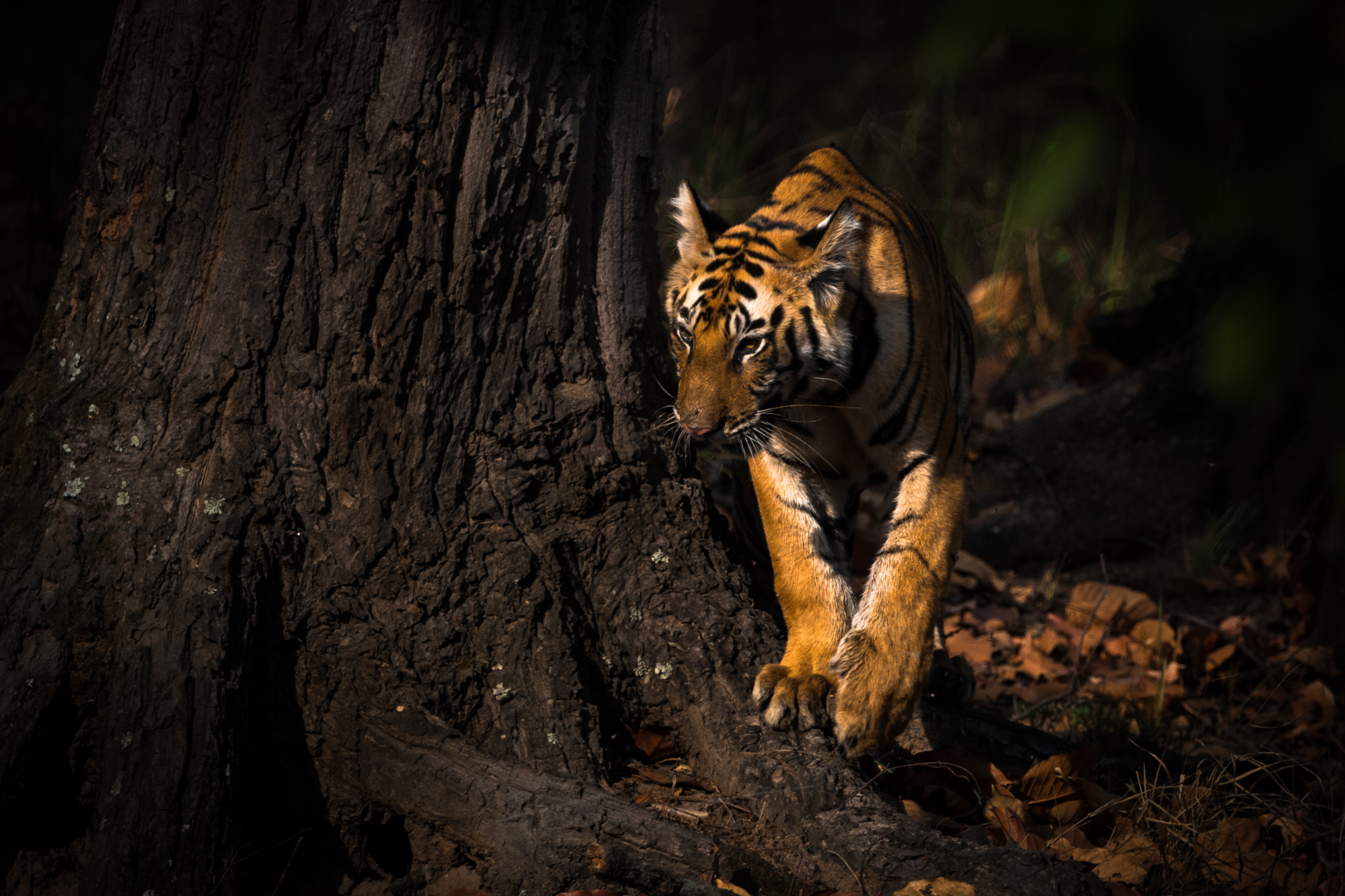 Tiger cubs are extremely curious. As they grow they like to explore every bit of their surroundings, like this 10 month old cub in Bandhavgarh National Park
Shashanka Nanda
Shashanka Nanda   |   Published 12.07.19, 12:01 PM

“Those are Rajbehra’s pugmarks, she’s headed towards Magadhi. Let’s try our luck there tomorrow.” And with that Ravi turned the car back to our safari lodge, after another unsuccessful day under the summer sun. Photographing tigers in the wild requires a healthy mix of knowledge, patience and luck. The latter had been eluding us for the past two days.

Thankfully, we had some of the most experienced men in Bandhavgarh National Park guiding us, and they reckoned the tigress would be in the Sehra grasslands in Magadhi range. We waited for more than an hour, and then luck turned. A group of grazing Chital (spotted deer) let out an alarm call and bolted in our direction. Minutes later, we were rewarded with the sight of a tigress leading four young cubs through the tall grass.

While the mother soon lay down to rest, the boisterous cubs played rough and tumble gambles -- practice for what would be serious hunting in a year or so. One cub perhaps decided that the he wanted to be a leopard instead of a tiger when he grew up. So he climbed a fairly tall tree (tigers are not exactly great climbers), and sprawled on a branch. A scene more at home in the plains of Africa, than in the forests of Central India.

Photographing tiger cubs is indeed a privilege. With mortality rates higher than 50 per cent, tigresses are usually shy in bringing their cubs in the open. But as they grow, it is important for cubs to accompany and learn from their mother as she hunts, so the occasional risk has to be taken.

We spent the rest of the day in the company of the tiger family, and over the years have been lucky enough to see generations of cubs mature into adults and establish their own territories. But then again, every cub is precious, for tigers are now facing perhaps the most challenging times in their lives.

A sub-adult male lion rests by a water trough in heart of Gir National Park. Male lions tend to stay with the pride till maturity, after which they strike out on their own
Shashanka Nanda

A male snow leopard guards its kill, an unfortunate sheep that he hunted down a mountain crag. Despite living at altitudes above 4000m, they now have to deal with heaps of human trash, brought in by unchecked tourism and improper waste management
Shashanka Nanda

Nearly twenty years ago, while on a trek in the in the Pir Panjal mountains, I sat on a ledge overlooking a gorge. I was observing a couple of bharal (blue sheep) grazing contentedly on the cliff face across the chasm. The sun was low, the weather crisp and a hot meal awaited me back at the camp. All was well with the world, and then hell broke loose.

What I had thought to be a rock, suddenly transformed into a grey missile, going after the bharal at full tilt. The bharal were running helter skelter, dislodging rocks and diving to lower ledges, raising plumes of dust. It was all over in seconds, the bharal had managed to escape with their lives. The grey creature gave up his quest, turned around and looked me straight in the eye and disappeared.

Delirious, I ran back to camp and narrated the event to my fellow climbers and guides. They scoffed at me – for snow leopards don’t turn up just like that. And they had never been recorded in these parts to begin with.

No one believed me that day, nor in the years to come. I had no photo to prove myself, so I shut up. Instead, I vowed to document my travels from there on -- and hence began my love affair with the camera and the big cats of India.

A bold male leopard, rests in the shade in Ranthambhore National Park. Leopards are usually shy, and disappear the moment they hear a vehicle, but this one stayed put, posing for the camera
Shashanka Nanda

The winter of 2017 had been the worst in living memory for Spitians. It had barely snowed up until then, and the locals were bracing for a summer plagued with water shortage and meagre harvest. With that, the dream of finally photographing a snow leopard also seemed distant – with its brilliant camouflage and no tracks to show up on bare rock.

Paulo Coelho once wrote “And, when you want something, all the universe conspires in helping you to achieve it.” His words rang true as we woke up on our fourth morning in Spiti. Overnight it had started to snow, and a blizzard was still going strong.

We knew this was our moment, so we set out on a long trek to a gorge where ibex, the snow leopard’s favourite prey, had been seen. Having located the ibex, we set up our cameras even as snow fell. It was an amazing sight to see them scamper across vertical cliffs like it was a playground.

As we were photographing the herd on a cliff, Dorje our guide had his eyes on the other side of the valley. A sudden movement alerted us and we hurriedly packed and headed that way. An hour’s walk through snow brought us to another gorge. There, in a crevice with the carcass of a sheep, was the snow leopard. The cameras were set up, shutters were pressed.

Just then blue eyes looked up straight into ours. And we cried.

And we kept crying, for it was also the saddest sight. The majestic creature was sitting atop a pile of plastic trash that had flown into the gorge with water and snow. The entire nullah was replete with plastic bags, sacks and bottles which had been carelessly discarded by locals and tourists. The sight was incredulous – we were looking at one of the world’s most elusive animals, but our waste had found it first.

March may be spring elsewhere in the country, but in the scrubby forests of Sasan Gir, it already felt like peak summer. Bouncing around on rutted safari tracks, we searched high and low for the park’s famed lions, with no success. It was only when we spoke to a Maldhari -- a nomadic shepherd from a community that has lived in these forests for hundreds of years, that we managed to get on the right track.

Unlike the secretive leopards, lions prefer to live a life in the open. And they are the only big cats who live in groups, known as prides. And it was one such pride that we were tracking, only to find a group of juveniles lounging by a water trough. The adults had perhaps gone hunting, leaving little for the youngsters to do. As it is, lions spend 16-18 hours a day resting or sleeping. Two individuals stood out - a male and female, astonishingly handsome. We spent hours photographing them, mindful of their precious lineage. For these forests are the last refuge of the Asiatic Lion. Barely two hundred years ago, the Asiatic Lion’s range stretched from Turkey to Bengal. Unchecked hunting and habitat loss pushed them to brink of extinction. Less than a dozen remained in the remote forests around Junagadh, Gujarat when the local Nawab stepped in and prevented their extermination.

Conservation efforts have brought them back from the brink, and now the state has over 500 lions and growing.

Deep in the heart of Ranthambhore National Park, lies a place called Telan Pacheri -- a dark, wooded part of the forest surrounded by towering cliffs, under the shadow of a thousand year old fort. Three paths, two that come down the cliff and a third that leads deeper into the forest meet here. Rocks, banyan wines and the occasional cacti make visibility extremely difficult.

I had now been visiting the park for many years. And every time I passed this place, the frantic alarm call of a sambhar, a langoor or a peacock echoed against the cliffs. Mohan, our veteran driver would brush it off as the resident leopard spooking the animals. And each time, he would drive off. For leopards are seldom seen in daylight.

But then, someone whispered ‘Baghera’ – the colloquial word for a leopard. We peered through the thick vegetation – not being able to make out anything. Necks craned, fingers pointed in ten directions. A movement, caught the corner of my eye. There he was, brilliantly camouflaged in broad daylight. The invisible king of this mystical forest.