The big cat is the focal point of a visit to Tadoba, but there’s much more to these jungles 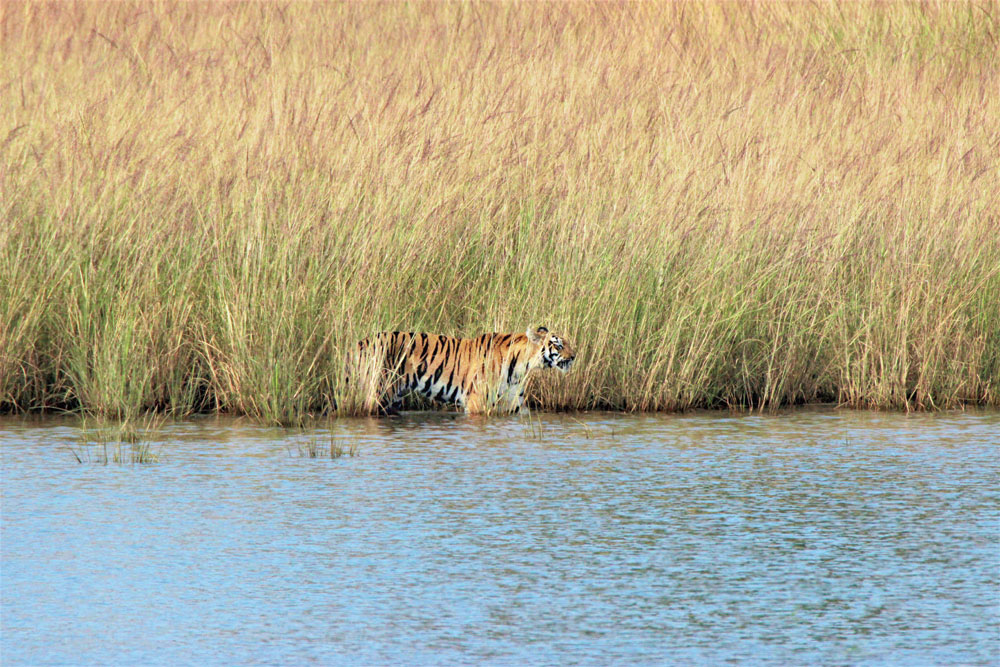 The tiger emerged from the tall grass by the lake along with two others
Pictures: Karan Mirik Sircar & Torushi Sircar
Tarun Sircar   |   Published 16.02.19, 05:24 PM

While observing the gaur our guide pointed out yet another species of spider — the giant wood spider with its large intricate web. Unfortunately, this safari did not yield too many opportunities but as the light faded the stench of a dead animal filled the surroundings. While we drove past, our guide pointed out to a heap of quills covered in blood — of what once was a porcupine, probably killed by a leopard he guessed. I wanted to take a photograph but the entire family protested.

While driving back to the entry gate we saw a herd of spotted deer. Some of them were alertly looking in the direction of the thickest part of the jungle, perhaps sensing the presence of a tiger.

While we were lining up for the morning safari the next day, my daughter spotted an owlet bobbing merrily in a nearby tree. While the kids trained their cameras on it, the entire gathering of photographers got into the act, startling the poor little bird. It quickly ducked out of sight, choosing privacy over stardom and fame. It was an auspicious start perhaps!

Social media is a double-edged sword. On the one hand it opens up a whole new world and lets one enjoy the sights of wildlife from the comfort of home, on the other it sends our expectations skyrocketing. We decided to go to the Tadoba Andhari Tiger Reserve in Maharashtra based entirely on pictures that we had seen on Facebook. We, too, looked forward to great tiger sightings and the opportunity to share our experiences with friends and family.

It took two-and-a-half hours to drive from Nagpur airport to Tadoba. Our driver, a talkative but knowledgeable chap, set the tone for our trip: “Visit Tadoba with an open mind and don’t concentrate only on the tigers. The jungle has much to offer if only you have the patience.” I liked what he said.

And we were ready with six safaris planned over four days in the core and the buffer areas. We had heard stories, read up on the Net and met experts who gave us tons of advice. The jungle always calms me — I forget the stress and strain of my work life and get transported into a magical world of light and shade, green and brown, flora and fauna. Bliss! 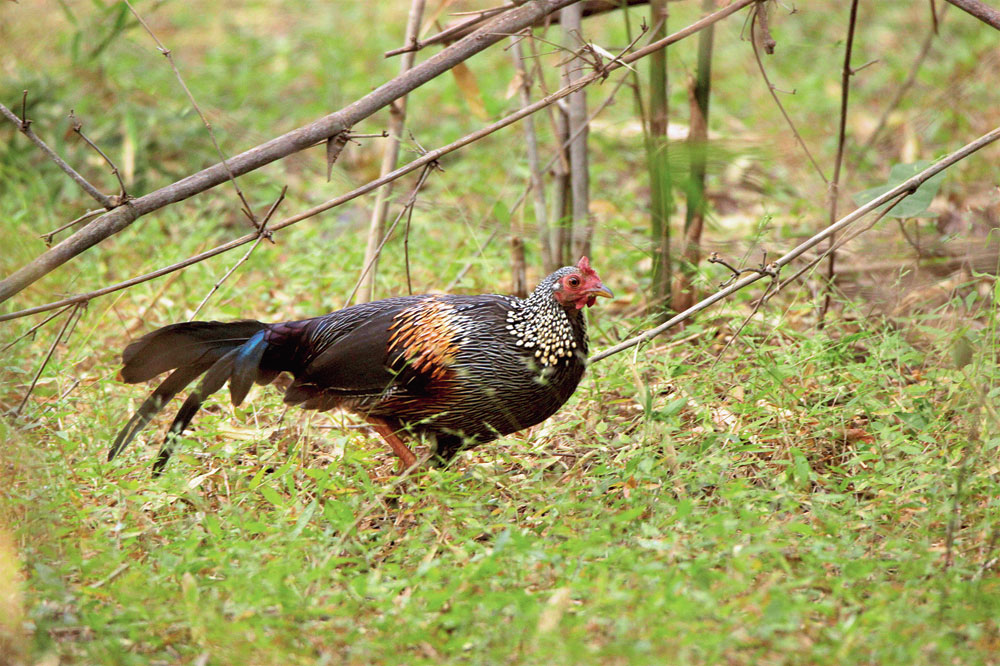 While we were driving past the Tadoba lake we spotted a few jeeps up ahead and inquisitively decided to explore. We were not disappointed. As we approached the jeeps we heard the unmistakable low growl of a tiger. Mating, exclaimed the guide. Though the sounds drifted towards us and the number of jeeps kept increasing, we were unable to spot the tigers through the tall, yellow grass. It was frustrating, to say the least. After persisting with our strategic position for about close to 25 minutes we were finally shocked out of the silence with an earth-shattering roar. Almost on cue, three tigers leapt out of the nearby grass, a mere eight feet away, and moved towards the mist-laden waters of the lake.

What followed was two of the best hours of my life — watching tigers swimming in the lake, getting into a mock fight in the water, and playing hide-and-seek in the tall grass created magical frames of the big cat in the wild.

They disappeared from sight momentarily, only to present yet another opportunity, yet another awe-inspiring moment. The power in the growls, the effortless movement in the water or through the grass gives you an idea of how comfortable the tiger is in the jungle. With its speed and agility, strength and ability to adapt to land or water, it truly is a magnificent beast.

Oh yes, while we were waiting for the tigers to appear we did get some nice pictures of an ibis and a shrike. In the end, it was a great holiday and we had many lovely pictures to remember it by. I’m already planning my next trip to the jungle. 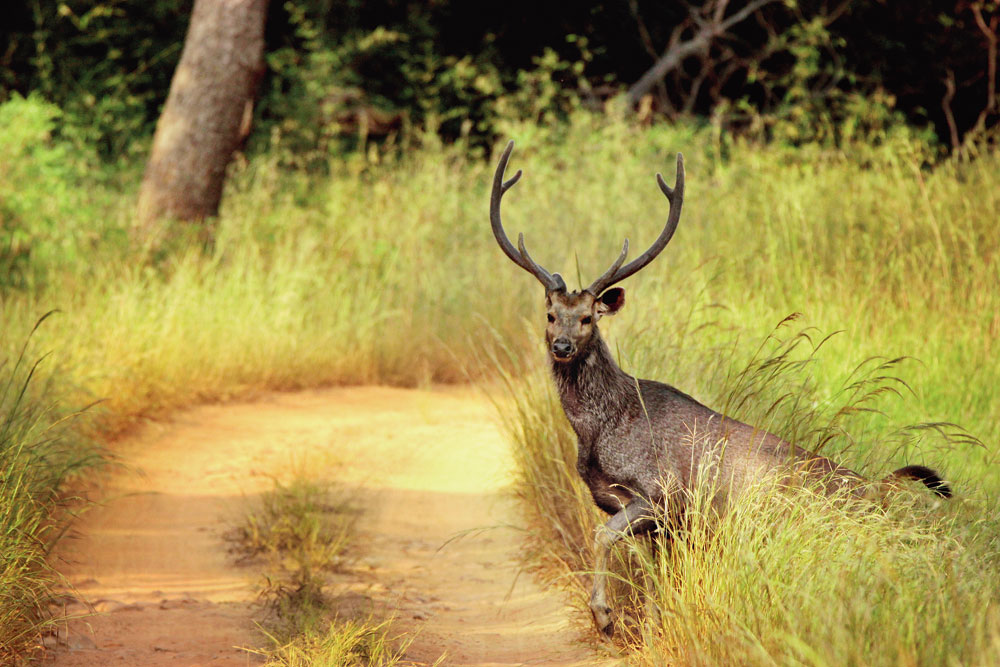 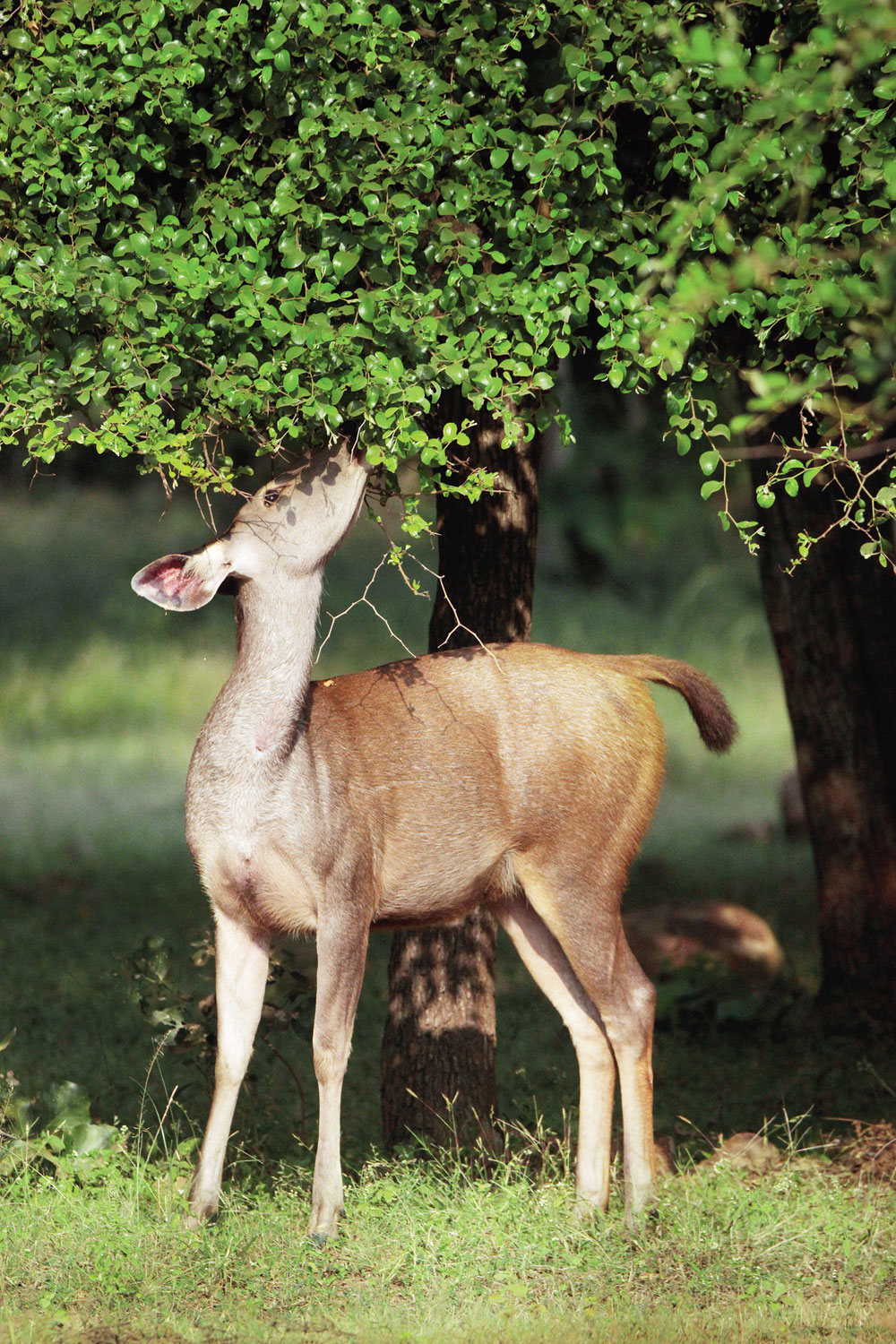 The next morning safari was in the buffer region of Tadoba with entry from the Zari gate. The body language of the driver and guide suggested that there was not too much to look forward to. While the previous area we visited offered us a better view and contained a lot of prey animals — mostly wild boar and deer — this region had a thick covering of bamboo.

Hope was on our minds, though a part of us knew we were going to be disappointed. Then we remembered the words of our driver — patience. So we waited in the middle listening to the sounds of the jungle. The calls of the birds. The distant call of a sambar. The rustle of leaves suggesting an animal was close by. Since we were so close to the shrubs we decided to while away our time photographing different types of spiders.

You win some and you lose some. But in the jungle you never lose hope. Because if you keep the faith, concentrate and look really hard, you are bound to be rewarded. It may not be a tiger all the time, but we were lucky to spot a hare. A normally shy animal that scurries out of sight in a flash. While you’re waiting you tend to notice the smaller creatures. A signature spider is something to gawk at up close with its uniquely-styled web. We would not have spotted the yellow-footed green pigeons but for the noise they made hopping from branch to branch. The sunlight bounced off their shiny feathers, highlighting the beauty of the state bird of Maharashtra. We also spotted a pair of mongoose and a raven.

The evening safari started on the right note — we spotted the magnificently muscled marvels —an Indian gaur nonchalantly chewing on some leaves. They are deceptively deadly and can get startled easily, which often leads to an uncalled-for confrontation. We decided to maintain a safe distance and got to observe them for a long time. It kept the swarms of irritating flies at bay with a swish of its tail or a flex of its rippling muscles. Actually it was quite a sight to behold. How a tiger ever manages to wrestle one of these fellows to the ground is mind-boggling. 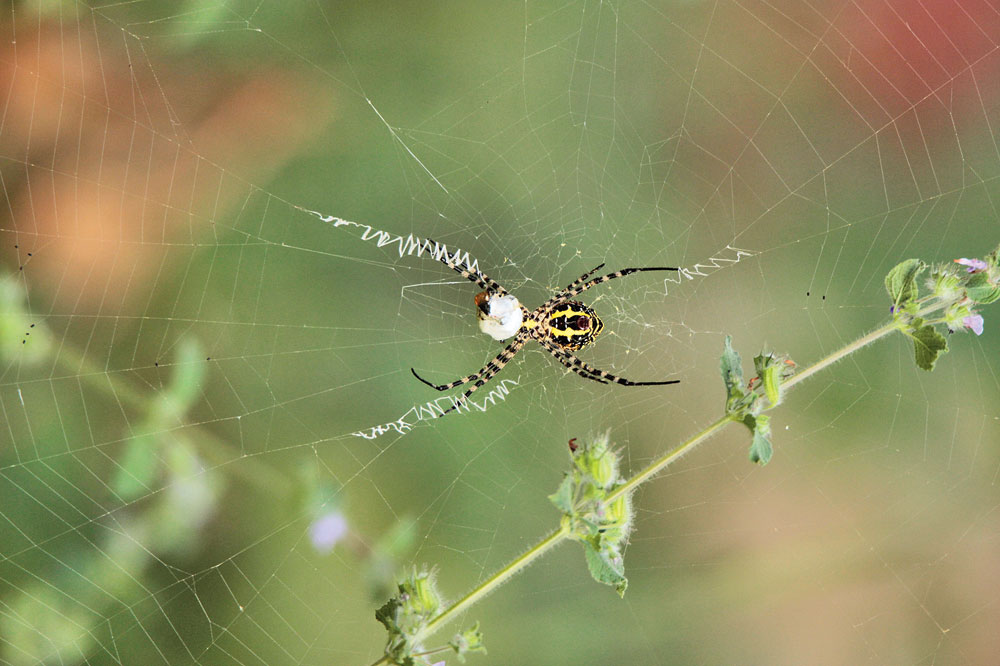 A unique design is what sets the web of a signature spider apart from that of its less creative cousins
Pictures: Karan Mirik Sircar & Torushi Sircar

The gate to the reserve is a good place to observe the people — the serious photographers, the fashion divas, the rowdy bunch, the scared family, the noisy teenagers, the first-timers and the seasoned visitors — all lined up and ready to create their own experiences. The drivers and guides try their best to explain the dos and don’ts. Some listen with rapt attention while others get busy clicking selfies.

October was an in-between month — neither monsoon nor winter. The greenery was patchy. The bamboo wasn’t its fresh green. The roads in the core area looked freshly laid out and contrasted with the surrounding jungle. The open gypsies moved at a fair speed and the heads of the visitors moved in unison like table fans, scanning the jungle, hoping for a glimpse of the much-sought-after yellow-and-black stripes.

Hope and luck are two powerful words which ride along with you in the jungle. A location is passed on excitedly by the guides and then the gypsies make a beeline to the spot in a mad rush. Sometimes the more experienced guides are known to misguide the others so that the serious photographers get the quiet required for that special shot. 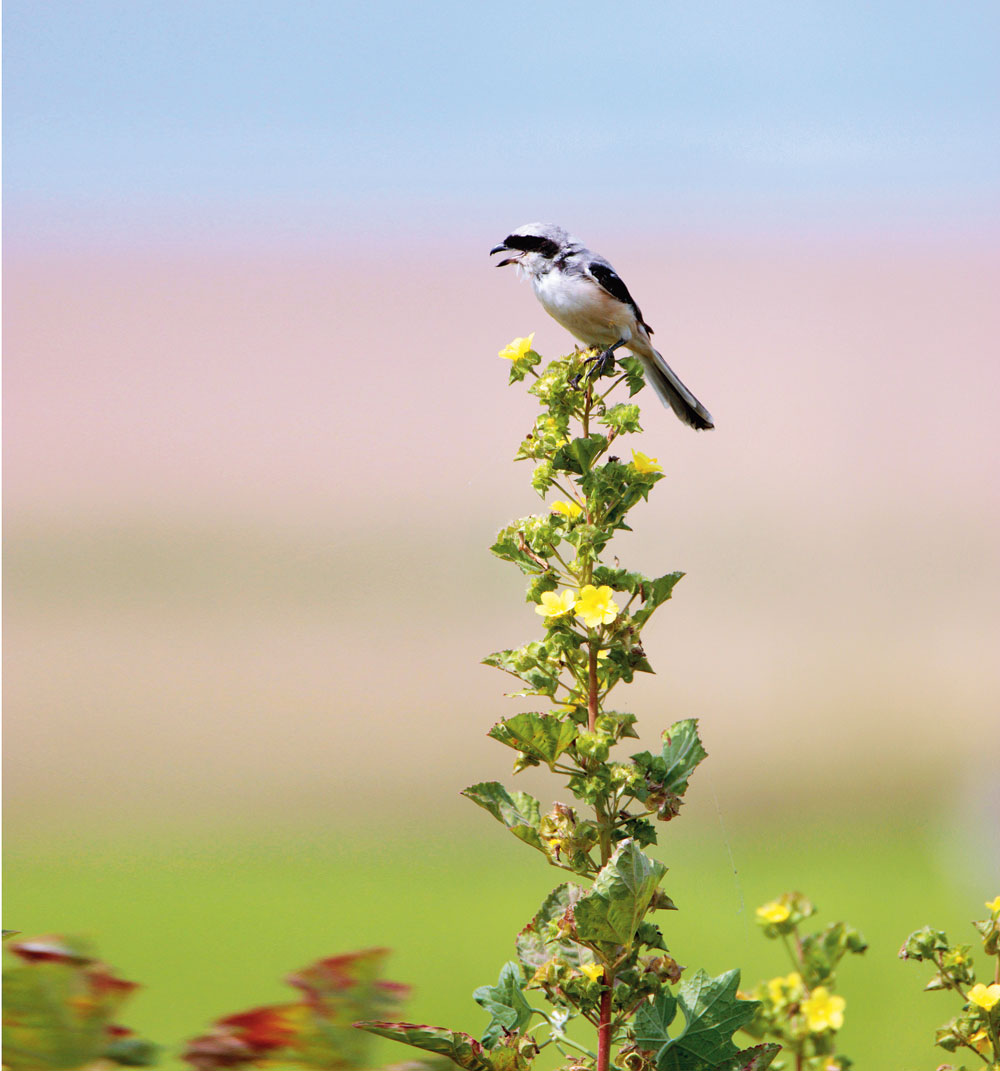 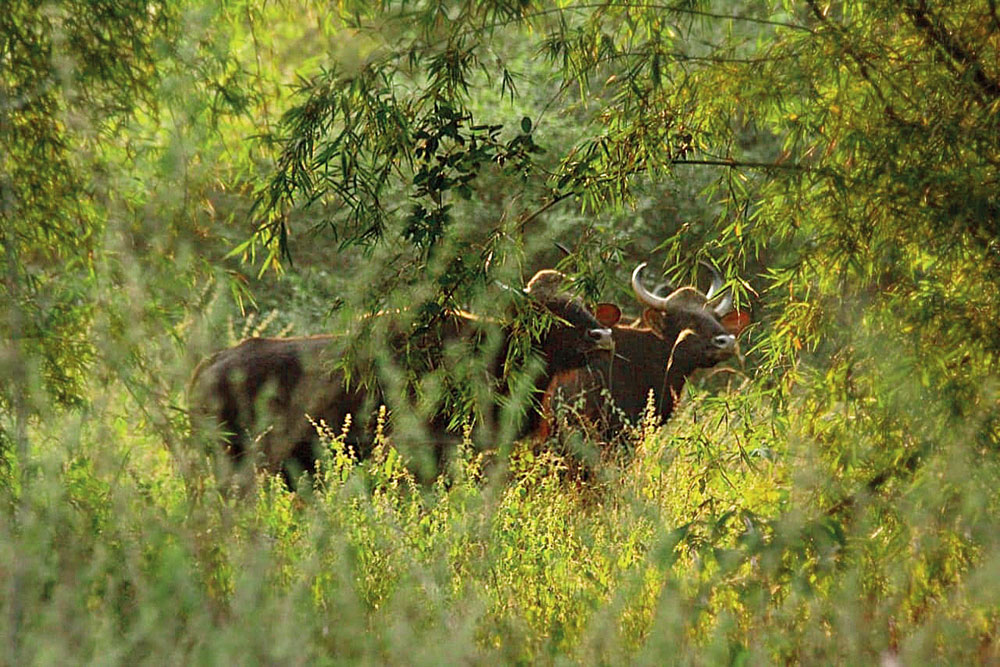 The Indian gaur can get startled easily, which often leads to an uncalled-for confrontation
Pictures: Karan Mirik Sircar & Torushi Sircar 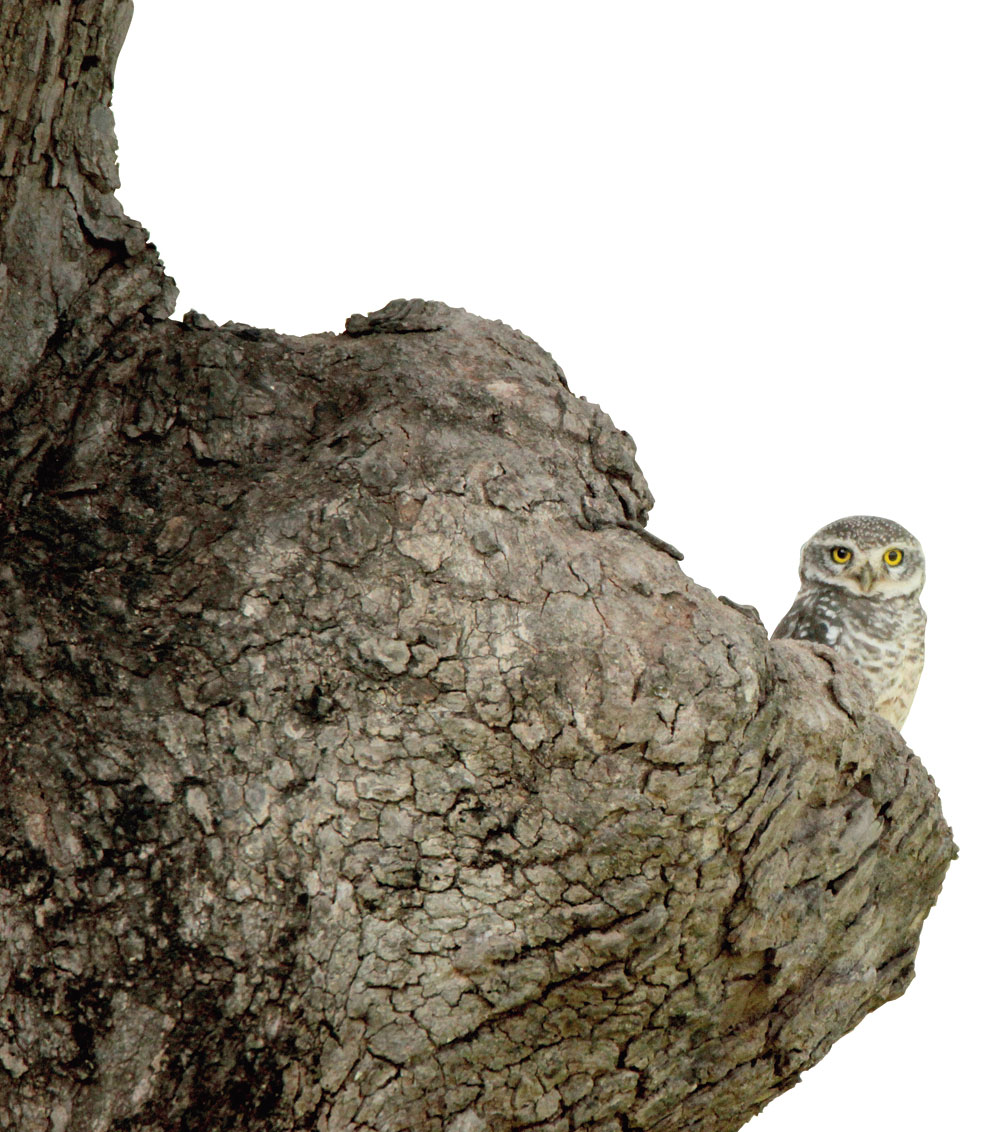 We spotted an owlet before we went on the safari, but with everyone training their lenses on it, it soon ducked for cover
Pictures: Karan Mirik Sircar & Torushi Sircar

Our first safari was in the afternoon in the core area from the popular Moharli gate. Fingers crossed and eyes wide open, we went in expecting a lot. Our guide, Swaran,was one of the most experienced and had fantastic eyesight. From the moving vehicle he could spot anything and everything that moved ever so slightly. The occasional gaur, a family of pigs, a scared spotted deer or a jungle fowl darting into the undergrowth, a shrike, a barasingha — nothing escaped him.

The monsoons had been kind to Tadoba this year. The results were all around. Sometimes the thick growth would hide the animals to the extent that a good photograph would be difficult, almost impossible. The guide would keep slowing down the jeep to point in one direction then the other and rattle off names of animals that he would be able to spot. Photographing these animals was another story altogether. I could sense the level of frustration rising.

The sound of silence in the jungle is deafening, almost eerie. The occasional flock of noisy parrots break the silence. No wonder a group of them is called a pandemonium. To truly observe and admire animals in their natural habitat, free and fearless, you need to visit a jungle.

In the jungle the roar of a healthy, adult tiger travels miles and is enough to send a shiver down the most macho spine. The roar though is rarely heard. What is more frequent are the “calls” that lead you to either a tiger or a leopard. The call of an excited langur perched high up on a tree or that of the sambar deer or the shrill call of a peacock are all signs that something is about to happen.

And Tadoba didn’t disappoint. Soon we were hurtling down towards the lake. Dust and dirt from the Gypsies in front of us made us cough and choke. But it is the tiger that was on everyone’s minds. The guide pointed and there it was in all its grandeur — an adult, fully-grown tiger majestically walking along the side of the road, oblivious to the line of Gypsies lined up on the side with people hanging on for dear life on the top, side, any place which would provide them that magical glimpse.

And magical it was. A tiger in the wild. No words can describe the feeling. It’s a mixture of awe, fear, achievement and wonder. Just as we thought we had seen it all, our guide pointed towards the front. And there were not one, not two, but three tigers together. I guess the luck bit I spoke of earlier was taken care of. Sadly, we couldn’t get close enough to get a photograph of all three. 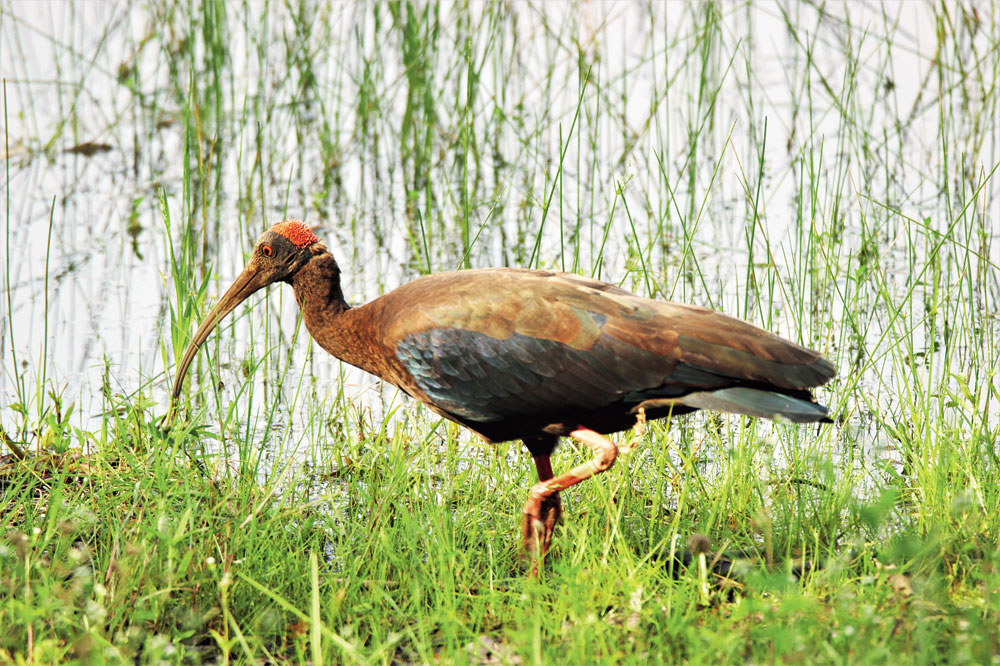 An ibis was an interesting sighting during the wait for the tiger
Pictures: Karan Mirik Sircar & Torushi Sircar 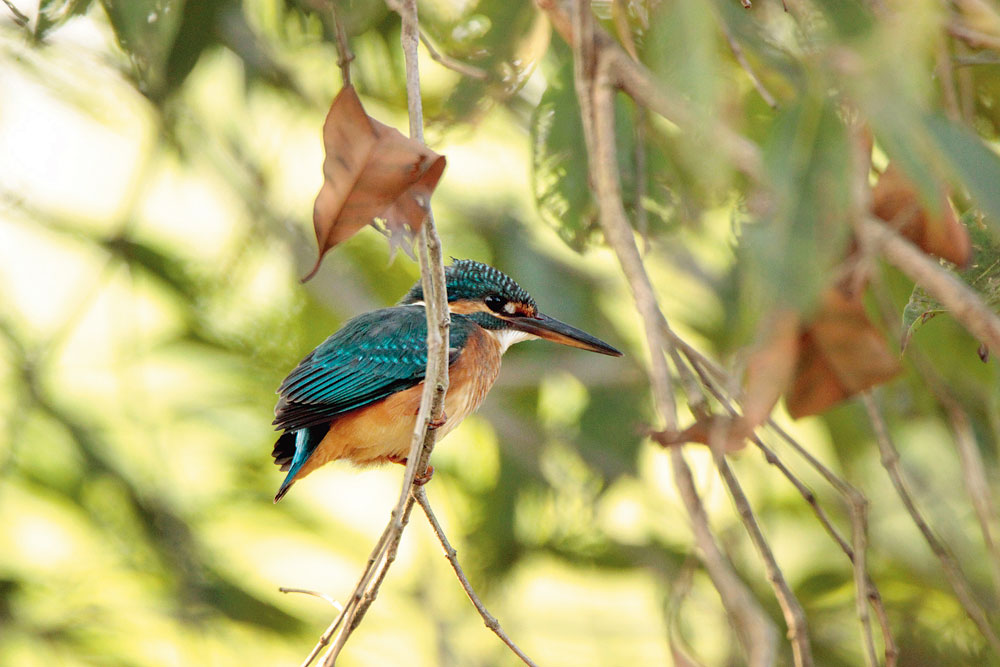