Dead men tell no tales, but their statues gesture at a larger ideological and cultural shift 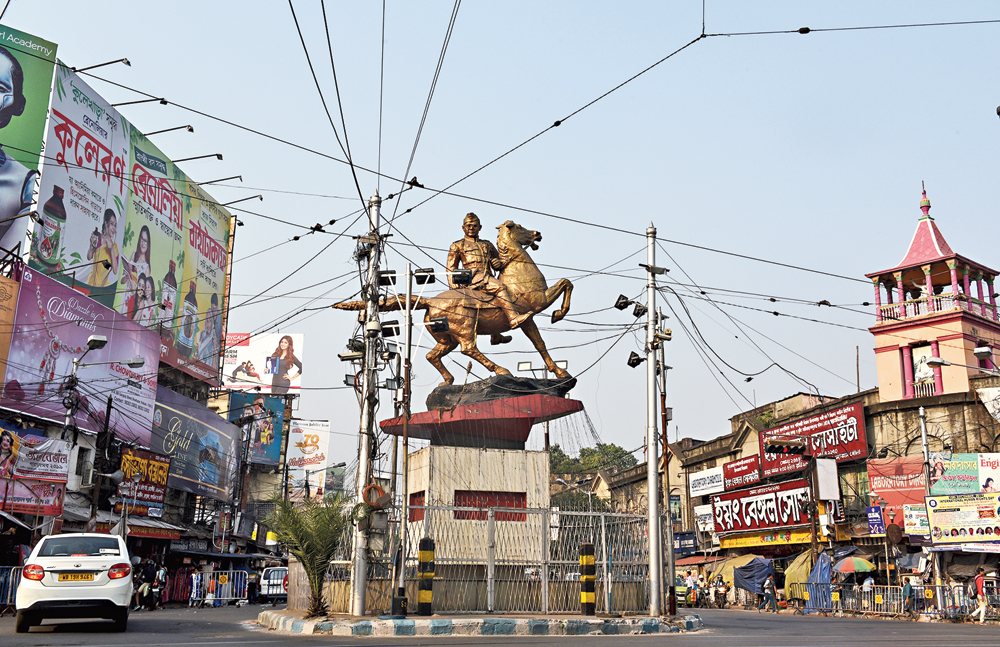 The statue of Subhas Chandra Bose astride a horse at north Calcutta’s Shyambazar five-point crossing has always been a crucial marker. A first-time visitor or someone somewhat lost and in the neighbourhood will always take the help of the statue. “Take the road facing the horse” or “follow the road the tail points to” are common refrains.

Apart from this, public statues in the city have little purpose. Though one must concede, in recent times statue vandalism has become a recognised form of political protest followed by a manic erection of statues everywhere starting from Bikash Bhavan to Puja pandals.

In such a scenario, art historian Tapati Guha-Thakurta delivered a lecture organised by Victoria Memorial Hall, titled “Why Statues Matter: The Changing Landscape of Calcutta’s Colonial and Post-Colonial Statuary”, which will find a place in her new book of essays.

That day at the Victoria Memorial Hall, Guha-Thakurta traces how many of the statues seen around Calcutta — of Outram, Auckland and the bulk of the colonial statues — came to be commissioned over the 19th century, how the material was sent to England to be chiselled into likenesses, their transportation back and installation. She talks about the commissioning of the famous equestrian statue of General Outram. “Following the commission given to John Henry Foley in 1861 by a combined London and Calcutta committee, the government of India had to send across to London 11 tonnes of gunmetal for the casting of the figure. The finished form was transported to Calcutta 13 years later and ceremonially unveiled in 1874.”

Guha-Thakurta also chronicles how in the 20th century many of these statues were dismantled by the ruling party in the state and huddled into oblivion elsewhere while newer statues took their place. “Most of them were relocated in one sweep in the late 1960s and early 1970s, motivated largely by the fear of the felling of statues during the Naxalite agitation. Compared to cities such as Mumbai, Calcutta’s colonial statuary was never vandalised — rather they found new hospitable locations, either within the Victoria Memorial, or later, within the Flagstaff House in the cantonment town of Barrackpore,” she tells the gathered audience.

It was with the Congress coming to power in the Calcutta Municipal Corporation in 1923, with Chittaranjan Das as the mayor, that the installation of statues of the “imperial masters” came to a stop. The statues of nationalist leaders started to come up in public places. 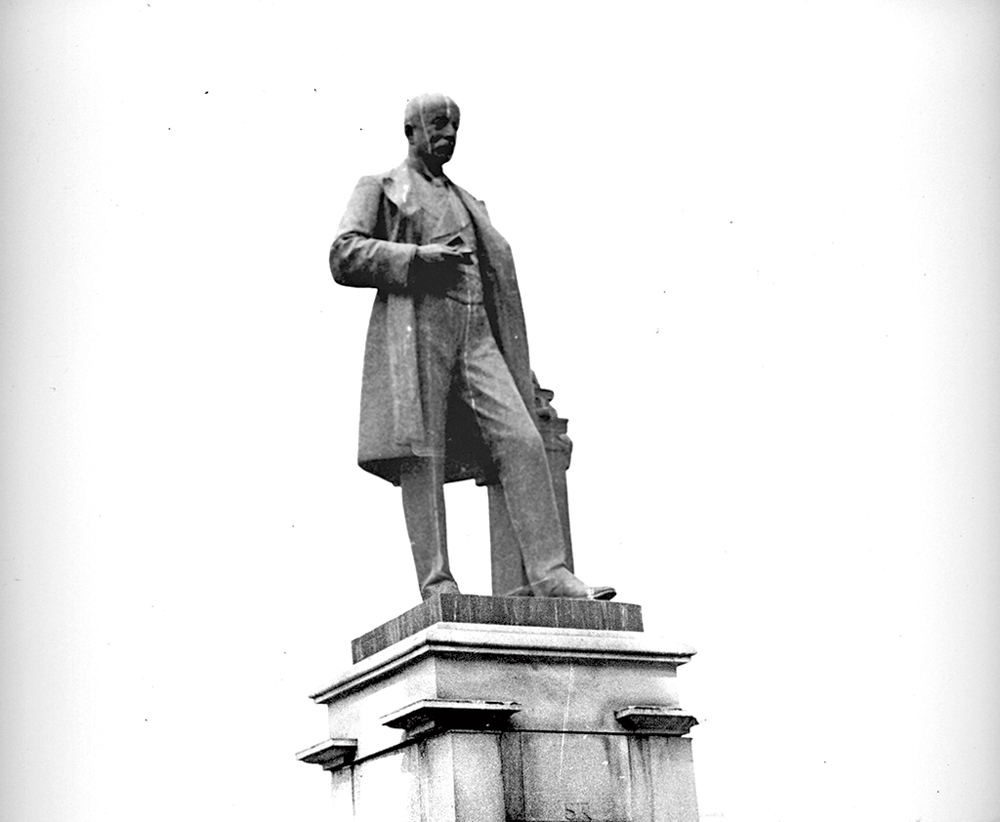 The first group of sculptors from Calcutta, all bearing the occupational name of Pal, belonged to the traditional clay idol-making families of Kumartuli and Krishnagar. They later acquired training in neo-classical art from Europe and realist statue-making from the Government School of Art in Calcutta. Gopeshwar Pal made the statues of Girish Ghosh, Rani Rashmoni and Rajendranath Mukherjee, and Romesh Pal is the maker of the statues of Chittaranjan Das, Surya Sen and Matangini Hazra that occupy prominent spots along the Dalhousie Square-Esplanade stretch.

Debiprosad Roy Chowdhury, who had trained under Abandindranath Tagore, was commissioned to sculpt the bronze statues of Sir Asutosh Mukherjee and Surendranath Banerjee. It was Roy Chowdhury who also created the iconic bronze statue of Gandhi’s Dandi March placed on Dufferin Road. This was the first statue of Gandhi to be officially commissioned by the state, in 1958, 10 years after his death, and it replaced the iconic equestrian statue of Outram.

There are rows of frozen-in-time nationalist leaders through the stretch of Victoria Memorial, Maidan, Esplanade and BBD Bag. These replaced their colonial predecessors when the first United Front government came to power in 1969. The Lord Curzons and Lord Cannings were relocated to the Victoria Memorial grounds or Flagstaff House. Richard Westmacott’s 1828 marble sculptural group of Warren Hastings in a Roman Toga, flanked by the figure of a Brahmin pandit and a Muslim scribe, can be seen in the West Quadrangle of the Victoria Memorial. It was shifted here in 1921 from the Town Hall. Guha-Thakurta makes the broad and ironical point that while the state was trying to erase or hide its colonial past, its present iconography was, and remains, equally lost on the masses.

A statue of Rai Kristodas Pal Bahadur at the crossing of College Street and M.G. Road is all but hidden by hoardings of a spice maker, a Benarasi sari shop, a political party and sundry others. Pal is not a widely-known public figure.

The pedestal engraving reads: “He is commemorated by his countrymen for his services as secretary to the British Indian Association, a member of the municipal corporation, a journalist, a legislator.” Surendranath Banerjee in Curzon Park, Ashutosh Mukherjee on Central Avenue, and the busts of Indira Gandhi and Rajiv Gandhi at Jaanbazar and near Jadu Babur Bazar, respectively, are also lost in the clutter of city life. Even where they stand uncluttered against the skyline, they remain largely invisible to the multitudes.

And yet there are promises of more statues, more Tagores, more Vidyasagars... As roads are renamed after public and popular figures, corresponding statues come up to drive home the point. A statue of Meghnad Saha, the scientist, has come up on Southern Avenue, and a mortar Uttam Kumar in dhoti stands before the Tollygunge Metro station, which has been renamed after him.

Veteran artist Ramananda Bandopadhyay says, “While the colonial era statues were way superior and made to perfection, our statues created post-Independence were based on the artists’ feeling and perception of the person whose sculpture he was making.”

He drew attention to Khudiram’s statue in the High Court area. Unlike the white sculptures of the earlier colonial period, the new sculptures are black — possibly to prevent them from getting dirty or drab. Or was there a post-colonial point being made?

Guha-Thakurta makes a distinction between sculptures and works of art as opposed to public statues. “Calcutta’s colonial period statuary can acquire an individuated identity as artwork associated with the studio and style of a known sculptor of the period, with engraved names of artists and foundries on the body of the object or from its pedestal,” she writes in her essay.

But never, as a rule, is the name of the sculptor anywhere visible in the post-colonial statues that came up. “The identity of the sculptors who were commissioned to make these figures stand in complete erasure. In most cases, the plaques on the plinth carry no more than the name and biographical dates of the person represented,” said the historian.

A keen sense of aesthetics and logic marks out the creations of the colonial era from their post-colonial counterparts. Sir Asutosh Mukherjee’s statue, for instance, stands right at the mouth of Chittaranjan Avenue. To emphasise that Mukherjee was an educationist, the maker created — more like dumped — a stack of books at his feet. Compare that with the statue of Lieutenant Governor of Bengal, Sir Andrew Henderson Leith Fraser, from 1911. Its maker, one George Frampton RA, also put a stack of books by his side, probably to commemorate Fraser’s stature as a lawyer. But unlike the statue of Asutosh, Frampton chose to put the books on a stand beside the statue.

The late sculptor, Ramkinkar Baij, who was taken on a tour of Calcutta’s public statues on a summer’s day in 1975, apparently had said of Roy Choudhury’s Gandhi on his Dandi march: “Where is he walking? It seems he is standing with his weight on the rear foot. There is a step he has taken but he is not walking. Why is his chaddar not flying? Why is his head bent? Where is the Mahatma’s gait and vitalilty in the legendary crusade?”

Of the Netaji statue at Shyambazar crossing, Baij was caustic: “Is that the horse’s tail? Did it stand up that way on hearing Netaji’s name? Even if the horse was galloping, the tail wouldn’t be horizontal. And here the horse is not shown galloping.”

Indeed, as a caricature of Foley’s equestrian Outram, this statue, Guha-Thakurta feels, has come to exemplify all that is wrong with post-Independence Calcutta’s public statues.