Our list starts with a mutilated Satyajit Ray, and goes downhill from there 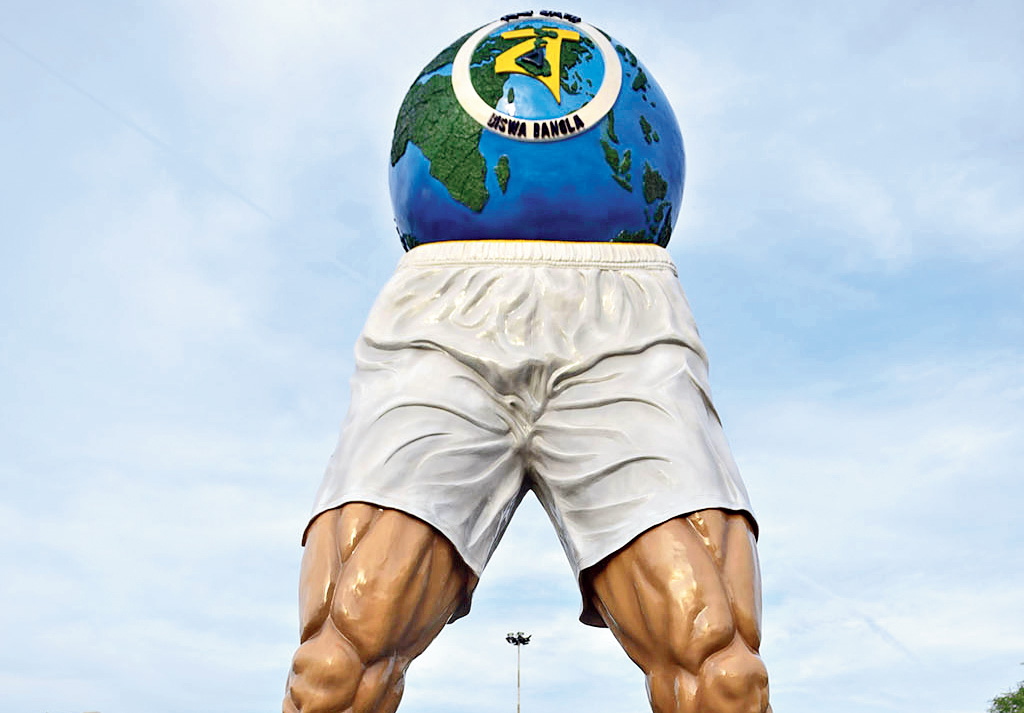 Statuary and public art are proliferating in the city. Most of these are scary. In this column I will try to arrange them in an ascending order of horror, in the classic Aristotelian sense. Horror, Aristotle says, is that which may be aroused in a tragedy by spectacular means, but may also result from the inner structure of the piece, which is the better way. In Calcutta, I am afraid, it is mostly the better way. Here it often happens through diminution.

At the same time I am aware that the statues I am talking about perform a significant social function.

I will begin with the statue of Satyajit Ray on EZCC island in Salt Lake. In fact, statues of legends are installed on Salt Lake islands in an obsessive way. But Ray, gleaming with bronze paint and trying to stand in a dignified posture with the camera hanging from his neck, in line with Mother Teresa and Sister Nivedita, also stands out.

About a foot seems to have been cut off from his legs. The missing foot sends a shudder down the spine. But with those inches hacked off, the sculpture has been able to cut Ray down to size. All men are equal — and some women too — and Ray is no exception. In order to look up to him, we need to reduce him to our size.

Here I cannot but mention a Tagore statue in a corner of a Salt Lake housing society. The statue, made of terracotta and painted black, comes with a full life-size beard but is less than me in height. It looks like one of Snow White’s dwarfs, the Gothic version. Children avoid that corner.

Somehow, Salt Lake and its adjacent areas, Lake Town and Baguihati, or Rajarhat, are crawling with the new statuary. At No. 3 in my list is the Little Big Ben in Lake Town. Little Ben, too, is scary in the way it has stunted the London original. But the surface material of the tower creeps me out too. It reminds me of dead skin. The thing zombies wear when they crawl out of the tombs.

But since Calcutta still wants to be London, and will never be, we need to have little bits of London here. In a size that is thought to be best suited for this part of the world. That way the people will not have to strain their necks too much.

At No. 4 is the Biswa Bangla globe on Parama Island near Science City. The installation of the globe was preceded by a ghostly affair: the Parama statue, of a woman with children, had for years stood here, giving the island its name, but one fine day it just disappeared and was replaced by the Biswa Bangla globe. Discovery of substitution, say of the grandmother by the wolf, is another classic source of horror.

At first, the Biswa Bangla globe was more scary. My daughter, till a few years ago, used to shut her eyes while passing it in the evening, when it did a kind of crazy dance, going round and round, all lit up. But it glowers still.

But how else could one brand Bengal?

No. 5, and the last, is a statue in the stadium premises which can be seen from the E.M. Bypass. I do not know how to describe it. Is it Ozymandias? Is it a football? Is it a nightmare? I have never gone too close to it, but Google images claim it is conceptualized and designed by the chief minister. The statue stands on two enormous legs, apparently resembling Cristiano Ronaldo’s free-kick stance, but where its waist should be is a globe/football with the ubiquitous “ba” of Biswa Bangla inscribed on it.

Above the globe, there is nothing.

It hits you in the pit of your stomach. It looks as if it has been beheaded at the waist. It also signifies a brutal end to imagination.