Advertisement
Home / Culture / Once Upon A Campaign
Big Story

Once Upon A Campaign

A year now since Bengal went to the polls. The run-up to it was a raucous campaign, the air swirling with CAA-NRC, hate speech, below-the-belt blows, violence, defections. For the longest time, the 2021 Assembly elections looked like a runaway victory charge by the BJP. Then the people of the state stepped in. In March, a group of artistes released a music video. It was titled “Ami onyo kothao jabona, ami ei deshetei thakbo” or I won’t go anywhere, I shall live right here, in this country, and seemed crafted to be a retort to one of the most commonly used weapons in the arsenal of the hyper-national against anyone voicing a protest — “Go to Pakistan”. In time, however, the song came to be identified as part of the No Vote To BJP campaign. A year on, The Telegraph asks some of those involved in the video if they are still savouring any sense of achievement; or if whatever collective responsibility they might have felt towards their state at that time has since abated 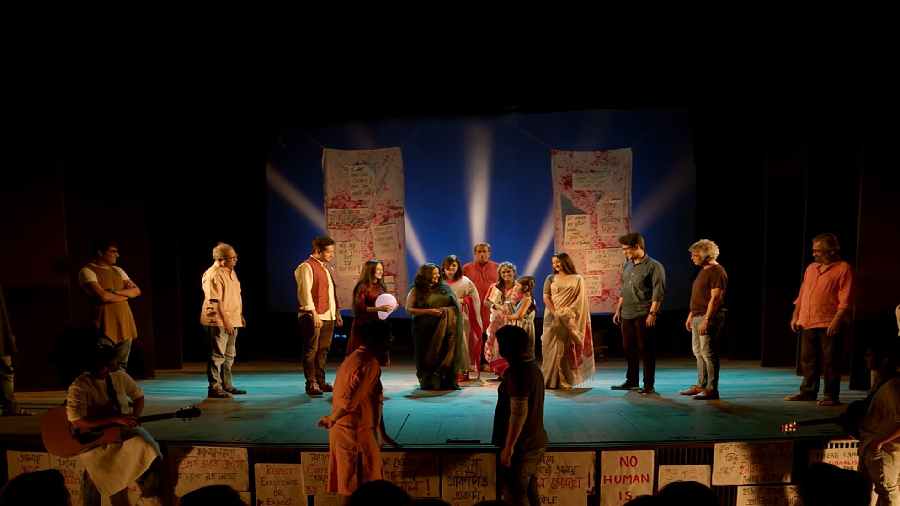 ‘I can’t change the world with one song’

When I wrote this song, a nationwide protest was going on against the CAA-NRC. Some of us decided to write a song and contribute to the protest. We had recorded the song before the pandemic. Later, many people came together to make the video. But the timing of the release was such that the Assembly elections were around the corner and the song came to be identified as a No Vote to BJP or anti-BJP and pro-TMC song. Some even said it was anti-Left. It gained a political status, which was far removed from the reason for its composition. I am not a fool to think I can change the world with one song. But what else can I do? The only thing we can do today is register our protest.

The only way to defeat the BJP is by uniting to fight it on a colourless platform. Given the chance to participate in another such project I would  do so again, enthusiastically. That I am still being trolled for the last video is another matter.

‘Fighting fascism is not so easy’

As an artiste, it is my job to be an agent provocateur, to prod people to raise questions. Now, there are no parameters to judge whether we were able to do it. What we can say is that the video wasn’t ignored. Fighting fascism is not so easy. It has different faces, different ways of making itself known... it is easier to stand against something than for a political party because then they want to co-opt you; you can then raise your voice against certain injustices but not against others. As an artiste, I want to be able to question all injustice.

I want to clarify that the video is not in support of any political party. The reason we didn’t want the BJP was because we did not want the violence they would bring. But the post-poll violence and the recent carnage have proved that we have failed there.

Our social training is to blindly follow  traditions or people without questioning. We have to build a culture of logic-based questioning to counter that. The song is about asking questions.

‘The song wasn’t just ours’

You cannot stop a large fascist force with just a song. Our idea laid the foundation but the song wasn’t just ours. It caught the mood of the moment, it sounded the first alarm for the country. The song was also the first call for resistance from outside a political party.

‘All of us wanted to keep the BJP out’

The BJP is a communal force, which is why we did not want it to win. Some of us in that video were Trinamul sympathisers, some were Leftists. But all of us wanted to keep the BJP out of the state. And we did achieve that; the BJP did not win the elections. But then, as is the dharma of all art, the song outgrew its aim. It is now being used by others to attain other goals.

‘It was my duty to protest’

The tagline of the song was not Nijeder mawte nijeder gaan. It was Ami onyo kothao jabona, ami ei deshetei thakbo. The dual issue of CAA and NRC had rocked the entire country and as a creative personality, it was my duty to register my protest. I am a professional singer. But this song was not a professional or commercial venture. I would have done the song even if the Congress was at the helm.

A lot of things were happening. Everyone was trying to protest through the work they were doing. We, theatre artistes, protested through stage performances. And this song was another expression of protest. People could identify with the song, with the lyrics of the song. It was their own voice, own words.

The  intention wasn’t restricted to the Bengal elections. The song was a voice of unity amidst constant discrimination and political polarisation. It felt good to see there were millions out there who felt exactly the way we did.

Those who dared to stand up and sing

‘I would do anything to keep out the Far Right’