The necessity of bitter beginnings

About a community’s taste for a peculiar hors d’oeuvre 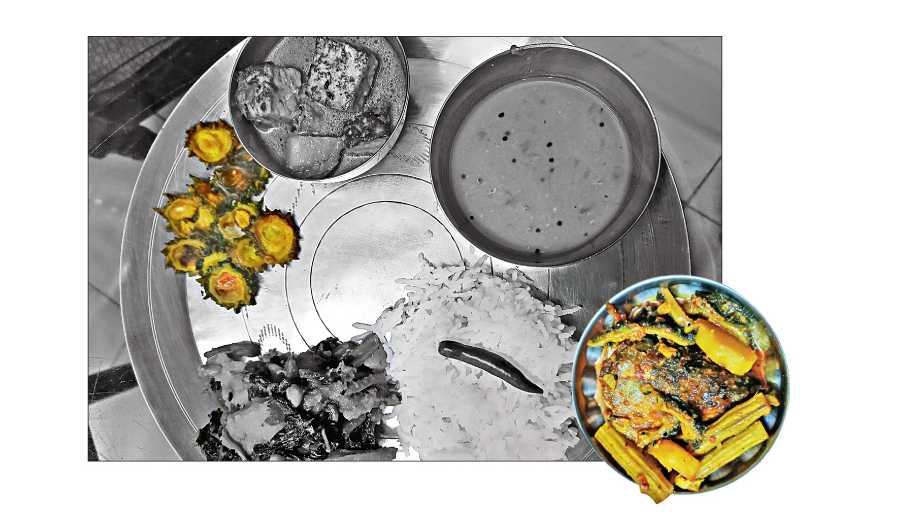 Bitter is not a pleasant word. Disagreeable facts, experiences and relationships are all called bitter in different languages across different cultures. And yet the main meal in Bengali cuisine — famed worldwide for its sweet preparations — cannot begin without a bitter dish.

The celebratory Bengali lunch usually starts with shukto — a lightly-spiced vegetable medley with the pronounced flavour of uchchhe or bitter gourd. In a traditional meal, dal, fritters, a vegetable course, a fish or mutton dish, chutney, mishti doi and sweets usually follow it.

Cooking shukto is considered an art; you are only as good a cook as your shukto, it is said. “I think shukto is the perfect example of ingenuity in Bengali recipes, making a less-than-palatable flavour delicious,” says Madhumita Pyne, a Mumbai-based home chef who specialises in Bengali food. “It is a brilliant dish that is a balance of flavours — you have sweet, salty and bitter in perfect harmony.”

While she might wax eloquent over the shukto now, Pyne admits it wasn’t her favourite dish at all as a child. “It is an acquired taste,” she says of the bitter dishes that are a part of regular Bengali meals.

Incidentally, the word shukto comes from shukuta — the dried leaves of the bitter jute plant — according to Bengali narrative poems of the 15th and 16th centuries. The shukuta has fallen out of favour centuries ago but a slimy preparation of paat pata or fresh jute leaves is still consumed in summer to keep the body cool.

Susanta Sengupta, chef and director of Bengali eatery 6 Ballygunge Place, has another take on the origin of the shukto. “The Portuguese used to make a stew with bitter gourd. Some historians believe that shukto is a version of it. But, of course, the tradition of having bitters — teto and pora — as the first course has always been there in Bengali cuisine. In fact, this bitter starter is unique to us.”

Chitrita Banerji asks in her book The Hour of the Goddess: Memories of Women, Food, and Ritual in Bengal, “Why would a hospitable people like the Bengalis invite a guest and assault the palate?” A devious way to make everything that follows taste ambrosial, says Pyne with a laugh.

Food historian Pritha Sen has a much better explanation. “In the olden days, food was not meant to be consumed mindlessly, it was supposed to have preventive and curative effects. The old medicinal treatises laid down an order in which food of the five basic tastes — sweet, sour, salty, bitter and hot — should be had. Meals always started with a bitter dish because it stimulated the appetite. And the bitter greens that we had — hinche, kalmi, thankuni, neem — also had medicinal properties.” While the theory is lost, the practice continues.

Bengal, it seems, had more than 500 varieties of greens. Food was dictated by seasons and every season had its own bitter green. Spring (basanta in Bengali) was for neem leaves, not the mature ones but the coppery, feathery, delicate new shoots. Fried till crisp, they could be had plain with rice or, as was more popular, mixed in with plush cubes of fried eggplant to make neem begun, a bitter dish with a sweet aftertaste. Especially if you had a drink of water after it. The neem leaves were also thought to clean the body of toxicity as well as prevent small pox, the Bengali name for which is also basanta since its outbreak usually happened during this season.

“Our belief in the healthful properties of bitter vegetables go back a thousand years,” says Banerji. “An 11th century collection of proverbs and sayings, attributed to a wise woman named Khana, recommends eating karola (bitter gourd) during the month of Chaitra (mid-March to mid-April), when the unforgiving heat of the tropical sun is at its worst.” Khana was the daughter of the famous mathematician Barahamihir and a scholar in her own right. In time, her couplets (Khanar Bachan) about weather, soil fertility and harvest became a guiding manual for farmers.

“Unlike in north India, both relative humidity and temperature are very high in the Gangetic delta and we lose a lot of fluids. Bitter vegetables play a huge role in balancing that,” says Sengupta. “While we have bitter dishes all through the year, it is essential to have them in high summer.”

Bitter dishes should always be eaten before sunset, says the chef and no, these dishes have not lost their appeal in modern times.

We have said whole paras only about the mixed-vegetable shukto and neem begun here, but in fact Bengali cuisine has a whole banquet of bitter dishes. There is the uchchhe seddho, steamed bitter gourd flavoured with salt and a dash of mustard oil; alu uchchhe seddho where the mashed potato leavens the bitterness somewhat; uchchhe bhaja or roundels of bitter gourd crisp fried; polta patar bora or fritters made from the young leaves of the parwal plant, uchchhe patar bora or fritters made of bitter gourd leaves, karola begun bhaja that is a play on the neem begun; the pox-preventive sajne phool bhaja when the drumstick trees are in full bloom.

And apart from the mixed-vegetable shukto, there is the lau shukto, bottle gourd flavoured with bitter gourd and the nearly-lost shasha shukto, cucumber flavoured with neem leaves. There is the teto-r dal — moong or arhar dal flavoured with fried roundels of bitter gourd, leaves of the bitter gourd or — hold your breath — leaves of the shiuli or parijat tree. Another bitter lentil preparation is made with matar dal or spilt yellow peas and stems of the parwal plant. Just like the variety of bitter dishes, there is a plethora of agents that impart the bitter flavour to dishes.

“All these dishes have been developed to make the consumption of bitter vegetables more palatable,” says Sen. The experts emphasise that while bitter is not a taste we naturally enjoy, we started eating it because of its preventive and curative properties. Bitter greens such as the antiseptic neem leaves are supposed to increase immunity while all bitter vegetables are supposed to stimulate appetite, keep the stomach cool — most important in this weather — and aid digestion.

The bitter taste has always been confined to starters in Bengali cuisine. While there exists a fish curry made with the medicinal, bitter thankuni pata, it is made exclusively for those with stomach problems and is seldom part of a regular menu. “While the Portuguese fish stew with bitter gourd is a main dish, bitter vegetables are never a part of the main course in Bengali cuisine,” says Sengupta. “A bitter starter is very much a Southeast Asian thing. Apart from Bengal, it can be found in Assam as well as in Burmese cuisine. But it is found nowhere else in India,” he says.

“Eating a bitter dish at the beginning of a meal is a throwback to those times when we believed in seasonal eating. When certain vegetables could be had only at specific times and were banned at other times. Hence the plethora of bitter flavouring agents, each according to its season,” says Sen. “The reason we are suffering from so many lifestyle diseases these days, not only in Bengal but all over India, is because we have completely lost touch with the seasonal, healthy, local way of eating,” she points out.

Wonder if bitter chocolate can become part of a healthy diet in this unending season of Covid-19.