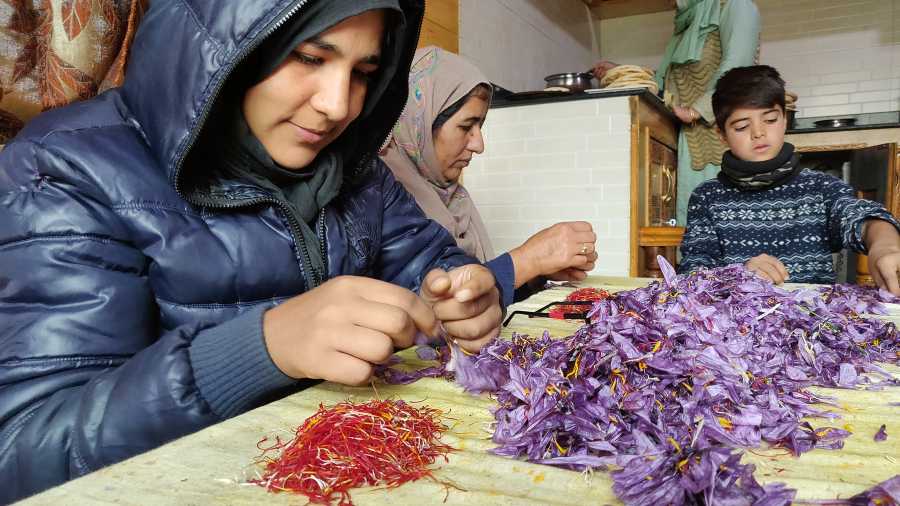 Pampore, mid-November. Highland plains just south of Srinagar. Saffron country. The temperatures have dipped, it’s harvest time. In a month’s time, the rolling fields around Chandahara, a local village, will be blanketed by snow.

The women from the Rather family are having a busy day. Despite the cold, 50-year-old Nayeema Bano is up early. After namaz, she’s gets busy plucking stigma off the violet saffron bloom of the season. An early burst of snow mid-October had threatened to burn the crop, but the spell passed and all seems well now.

The corridor leading to the kitchen of the Rather household is awash with the fragrance of freshly harvested saffron. The house is full of morning bustle, but Nayeema’s fingers work unhindered and relentlessly, extracting the saffron without even having to look at the flowers. “I have been doing this all my life,” she mumbles.

Nayeema belongs to a traditional family of saffron growers. Her husband Nazir Ahmed Rather and his two brothers own a large cultivation in Chandahara. The men look after the maintenance of the farm, the women take care of the harvest. Nayeema is a veteran; she learnt the art from her mother-in-law Jahan Ara, and has now passed on the tradition to her daughters and daughter-in-law.

“The harvest is like a festival for this village. We wait for this time of the year. It becomes hectic as I have to manage the house as well, but there isn’t a single day I miss going to the farm,” Nayeema says. For the womenfolk, saffron-plucking season is also an opportunity to step out and mingle with friends and relations in the neighbourhood and share time over samovarfuls of fragrant tea, or over lunches under the shade of giant chinars that dot the fields.

On a leisurely evening en route home, they would also sing poems and songs of the 16th century poet Habba Khatoon, the Nightingale of Kashmir who also belonged to Pampore. Habba’s poetry prominently features saffron.

Since I was as young as three, I haven’t missed a single harvest season. I would accompany my mother, aunts or grandmother. I made several friends here and learnt about our rich traditions and the songs of Habba Khatoon that we would often sing. Today, even though I am based in Delhi, I would not miss a chance to visit the fields and meet my friends, who I know would be around,” says 20-year-old Rafia Nazir, a student of international humanitarian law.

Rafia is not alone; other youngsters such as Ishrat, who studies engineering in Delhi, Humaira, who is studying to be a doctor in Bengaluru,

and so many others working or studying outside Kashmir have returned home to gather in the fields and become a part of the occasion. “The last two years (following the severe restrictions and strife after the abrogation of Article 370 in August 2019) we couldn’t even see each other. I took one week’s leave from my college, just to be around, inhale the fresh fragrance of saffron and meet my friends,” Humaira says.

While the women are in a celebratory mode, the men have begun to figure the business prospects. Dry conditions, for which climate change is to be blamed, have seen a sharp fall in saffron prices over the last two decades, casting a shadow on the future of traditional cultivation in Kashmir itself. One of the world’s most expensive spices, saffron, also known as the crop of gold, is an essential ingredient of wazwan, the elaborate Kashmiri meal platter, and kehwa, the famed saffron-laced beverage.

Saffron cultivation is believed to have been introduced in Kashmir by the 12th century Sufi saints Khwaja Masood Wali and Hazrat Sheikh Sharif-ud-Din, popularly known as Shokh Bab Sahib. Even today, most farmers offer a heap of saffron on the first day of the harvest at the shrine of Hazrat Sheikh Sharif-ud-Din, situated at Namblabal Pampore in south Kashmir’s Pulwama district.

The traditional saffron growers blame several factors for the constantly declining production and procurement of saffron. Political and Covid-induced lockdowns or disruptions have hit the trade hard in recent years, but climate change is no less a factor. Farmers and wholesale saffron traders also hold the government responsible for mismanagement. The Rs 400-crore National Saffron Mission sponsored by the Centre has, for instance, moved tardily, barely bringing any benefit or relief. “Each kanal (land unit roughly close to an acre) under saffron cultivation can produce anywhere between 50 to 500 grams of saffron. An average income generated from each kanal under saffron cultivation is anywhere between Rs 10,000 and 15,000 only. But over the last decade this income, too, has reduced. We own around 70 kanals, and we just managed 15kg saffron. When dried it became 2-3 kilos,” says Ayaz Ahmed Rather, who runs a manufacturing unit in Chandahara. “We spend around Rs 2.5-3 lakh every year for the maintenance of fields and labour for ploughing and tilling. What we earn is relatively very less. Not only has the yield declined but the price is also witnessing a dip in domestic as well as international markets due to the saffron coming in from Iran and other countries,” he adds.

“The last two years have been the worst due to the lockdown after abrogation of Article 370 and the Covid-19 pandemic. Slowly, the Kashmiri saffron, which is nearly 50 per cent costlier than the Iranian saffron, is being replaced by the latter. This is despite the fact that Kashmiri saffron is considered far better than the Iranian saffron,” says Subhan Haji, another saffron grower from Lethpora.

The dip in the yield over a decade has brought hardship to the entire belt, forcing some growers to sell off their land. The younger generation, also feeling dejected, has opted for alternative sources of income such as employment, labour, retail businesses or other start-ups. “I used to own around 20 kanals of saffron fields, which I inherited from my ancestors. But with the decline in the trade we faced losses. I had to sell around five kanals a year ago on the occasion of my daughter’s wedding. None of my sons wants to continue the traditional family business. I have two sons, one is studying law in Delhi and another is working with a private mobile company,” says Asadullah, a fifth generation saffron grower.

But this year, there is a slice of good news. According to the Jammu and Kashmir Saffron Growers Association (JKSGA), the early winter signs are that there has been increase in the production over previous years. The association has just cause to be delighted. “Good weather conditions and timely rainfall helped the crop grow. We cannot say that it is a record breaking crop this year, but it is better than the last two years,” said the JKSGA chairman, Abdul Majeed Wani.

Nayeema Bano and her band of women probably have cause to strike a merrier note as they busy themselves with the harvest around their samovars.

This saffron surge was aided by Congress