Please Do Not Touch

Yesterday was the Mahatma’s birth anniversary. The award-winning filmmaker from Gujarat makes his case against plans to ‘redevelop’ the Sabarmati Ashram 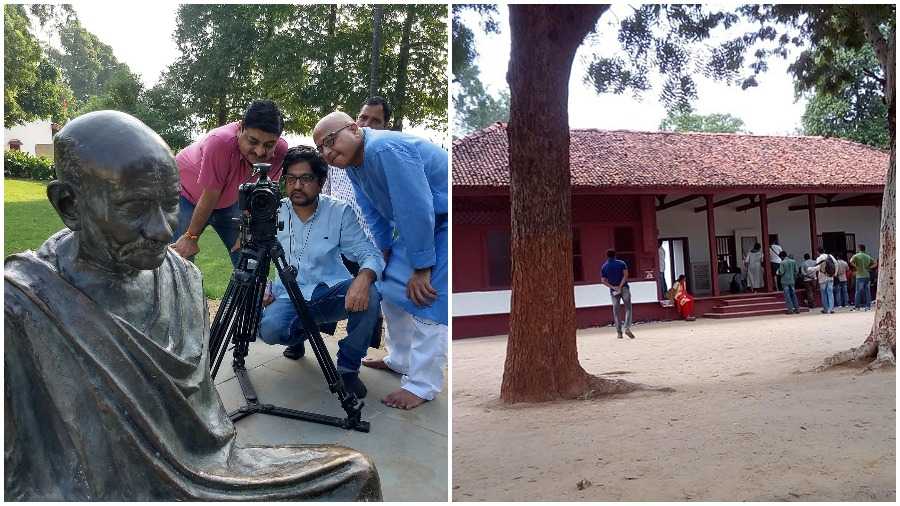 Mehul Devkala (behind camera) during the shoot of his film on Sabarmati Ashram (on the right) that may soon be flanked by VIP lounges and food courts
Courtesy, Mehul Devkala
Mehul Devkala   |   Published 03.10.21, 12:13 AM

"The body is perishable but if my soul is present at the ashram then it will always be alive. If the atmosphere at the ashram, for which we all are trying, also becomes the atmosphere of our own self, then the ashram will never be a lonely place,” wrote Mohandas Karamchand Gandhi in his reply to ashramwasi Prabhudas, who was feeling lonely in his absence. This letter was dated February 1918. Mahadev Desai’s diaries have entries about plenty of such letters along with minute details of day-to-day conversations with Gandhiji and other visitors to the Sabarmati Ashram.

Desai started work as Gandhiji’s personal secretary in 1917. It is the same year the Sabarmati Ashram was founded. All ashramwasis, around 40 in total, were living in temporary tents and eating together. The ashram was still taking shape.

Gandhiji had chosen this place on the banks of the Sabarmati river with care; the location of a British prison nearby was one of the reasons. As Gandhiji wrote in his autobiography, “All ashramwasis should be prepared to go to prison at any time.”

Gandhiji lived in the Sabarmati Ashram from 1917 to 1930. The ashram witnessed many historical events during his stay, including the Dandi March. It is a living monument of the Mahatma and our freedom struggle.

Today, the ashram’s sanctity and dignity are under direct threat from a redevelopment project of the Gujarat government. The plan is to spend a whopping Rs 1,246 crore to convert it into a theme park of sorts, complete with a VIP lounge, food courts and new built-up units. Around 250 families, descendants of the ashramwasis brought over by Gandhiji, have been forced to vacate the premises. Gandhiji would have never allowed that to happen.

Gandhiji would instead have resorted to satyagraha to stop the misuse of crores of public money and proposed that it be used for some humanitarian purpose.

More than a thousand signatories have so far opposed the Sabarmati Ashram redevelopment project. Heritage lovers and aesthetes fear the “redevelopment” might end up erasing the essence of Gandhiji’s message of simple and chaste living, and instal on the site an unseemly spectacle of razzle. Just as has happened with the erasure of the preserved memory of horror at Jallianwala Bagh.

The ashram attracts lakhs of visitors every year and Gandhiji’s name needs no marketing or world-class facilities to pro-mote the place.

The ashram is testimony to the essential symbols of Gandhiji — peace, simplicity, serenity. There is no entry fee. Just imagine the modest Hriday Kunj and the small Vinoba Kutir surrounded by food courts, VIP lounges, parking lots and other proposed facilities after the “redevelopment” of the premises.

Many believe it is the second assassination of Gandhiji.

The chairperson of the Sabarmati Ashram Preservation and Memorial Trust, Elaben Bhatt, who is also the chancellor of Gujarat Vidyapith founded by Gandhiji, said in a recent interview, “It is an elected government and they have assured us of not doing anything under the project which is against Gandhian values. I believe there is no party politics involved.”

Trustees have already given their approval for the proposed redevelopment plan. Prakash N. Shah, Gandhian and president of the Gujarati Sahitya Parishad, who is at the forefront of the campaign against the ashram’s redevelopment has clearly said, “This is not a matter that can be sorted out between the government and trustees behind closed doors. The Sabarmati Ashram is a national heritage and people of India must have their say. Let the government come and clear its stand in public; why the hell are the trustees speaking on behalf of the government?”

Shah added, “The present ruling dispensation is not only megalomanical, but also in retrospect wants to be identified with the freedom struggle. When the whole of India was involved in the Quit India Movement, the Hindu Mahasabha and the Muslim League were busy propagating politics of Hindu-Muslim divide. Now, they want to acquire their full control over monuments of the freedom struggle and promote themselves through event management. It is high time we raised our voices against such attempts so as to help us stick to the values of our freedom struggle.”

Another reputed Gandhian trust that is being eroded over the last three or four years is the Navajivan Trust. Of course, in this case it is not the government that is at fault but its current trustees.

The Navajivan Trust is a publishing house founded by Gandhiji in 1929. Navajivan initially started as a weekly Gujarati newspaper by Gandhiji from Ahmedabad. This was in 1919. Gandhiji also started an English weekly named Young India the same year. Gandhiji’s autobiography Satya Na Prayogo (My Experiments with Truth) was originally written in Gujarati and published in weekly instalments in Navajivan from 1925 to 1929.

Young India published the English translations in instalments. Later, the Navajivan Trust published both Gujarati and English versions of the autobiography in book for-mat. In 1933, Gandhiji started the weekly newspapers Harijan, Harijan Bandhu and Harijan Sevak in English, Gujarati and Hindi, respectively, with the purpose of removing untouchability.

The Navajivan Trust has published hundreds of books in different languages to propagate Gandhian values in the last eight decades. Such a highly reputed Gandhian trust is now publishing below mediocre books written by trustees, their family members and their friends. Also, their books are featured prominently on Navajivan’s official website. They still sell and reprint old Gandhian books to generate revenue but the main focus is to promote their own people. They also started a café, which has nothing to do with Gandhiji’s ideology.

Gandhiji believed trusteeship means looking after the inheritance and welfare of the people in general. Trustees are not owners but custodians.

Legendary Gujarati poet, writer and freedom fighter Zaverchand Meghani’s 125th birth anniversary celebrations by the Gujarat government across the state and the main event at Gandhinagar on August 28 left people upset at the absence of Meghani’s photograph on the invitation cover as well as on the massive stages erected for the celebrations. Instead, the Prime Minister’s and chief minister’s pictures were everywhere. Even at Chotila, the poet’s birthplace, the scene was no different. Meghani is very popular among Gujaratis and public money was wasted over the government’s self-promotion rather than celebrating their beloved poet.

Meghani had written a poem, Chhelo Katoro, to Gandhiji in 1931 when the latter was going to attend the second round table conference in London. This poem was an attempt to put in words the turmoil in Gandhiji’s mind. On reading the poem, Gandhiji had said to Mahadev Desai, “This is an accurate portrayal of my mindset.”

I was fortunate enough to be able to shoot my short film Kaun Se Bapu at the Sabarmati Ashram in September 2019. My film depicts how we have forgotten Gandhiji and his values in contemporary India, how we have locked him in currency notes, framed photographs and in statues. I am afraid that it is going to be the last film shot at the original Sabarmati Ashram.

I first learnt about the redevelopment of the Sabarmati Ashram from one of the descendants of an ashramwasi while shooting for the film in 2019. News of the actual redevelopment project broke just after the Covid-19 catastrophe. I have since been talking to Prakash N. Shah and other Gandhians on this issue. We have also released an appeal. If the authorities choose to ignore the appeal and continue to carry on with the redevelopment project, then Gandhi Jayanti of October 2022 may be the last one to be celebrated at the original Sabarmati Ashram.

Generations to come will be able to see the original only in pictures and videos.