Zen positive (and the art of staying) 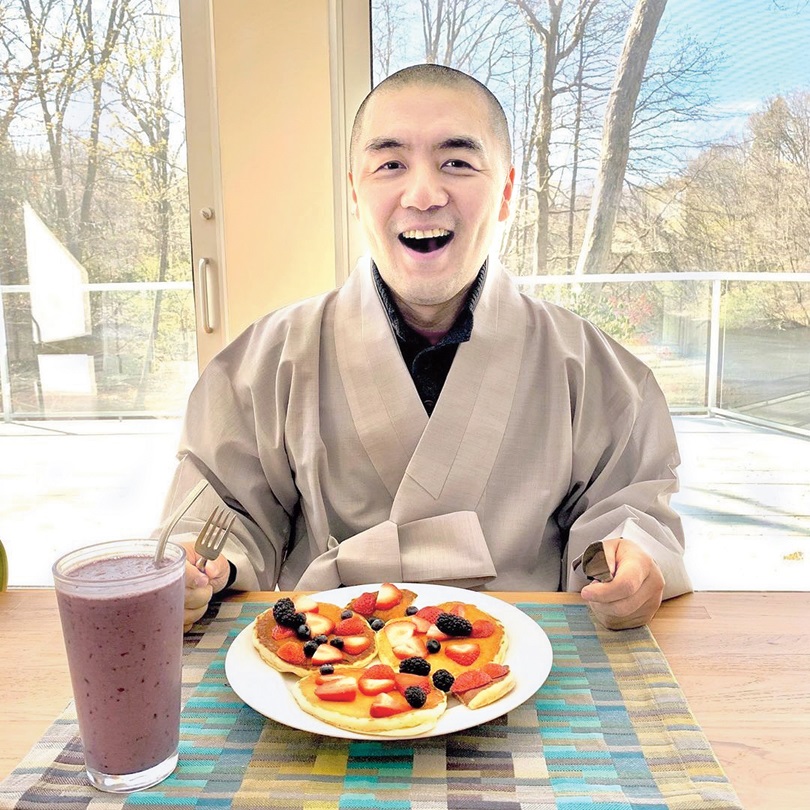 Why am I smiling? It is because I am about to have strawberry pancakes with blueberries smoothies. Happy weekend wherever you are!
Sourced by the Telegraph
Shrestha Saha   |     |   Published 03.10.20, 07:16 PM

Haemin Sunim, the monk who went online, lives with the singular motto of helping people around the world with answers to their grief. After multiple degrees from Berkeley, Harvard and Princeton and an existential crisis to boot, Sunim decided to embark on a path of discovery by being a monk. A stray interest in Twitter led him to a million followers who he would help with his discourse. All in 140 characters. As his popularity soared, a book was inevitably on the radar and The Things You Can See Only When You Slow Down was born in South Korea, later to be translated to 37 languages. His second book Love for Imperfect Things sold over four million copies worldwide.

The Zen Buddhist monk also founded The School of Broken Hearts, a non-profit organisation which aims to equip those in grief through emotional and spiritual counselling. First in Seoul and later in Busan, the centres were thriving while the author aimed at taking the concept of the school around the world. Speaking to t2oS from Seoul on WhatsApp, the author discussed at length the positivity in our troubled times. Excerpts.

Due to communal clashes, religion is increasingly being denounced by youngsters and faith is being shaken. What would you say to the youth of this country who are mired in existential dread much like you were at a young age when you decided to become a monk?

I do not believe in any kind of blind faith. I think people should be able to stand up and ask questions. You should test it for yourself and see if it works for you. It may be the best medicine in the world but if it doesn’t work for you, it doesn’t. You should test it for yourself and if it will work for you or not. Understand people like me or before me who went through the exact same emotions and learn about how they coped. This existential crisis could be a great opportunity for you to grow. Spiritually and emotionally. 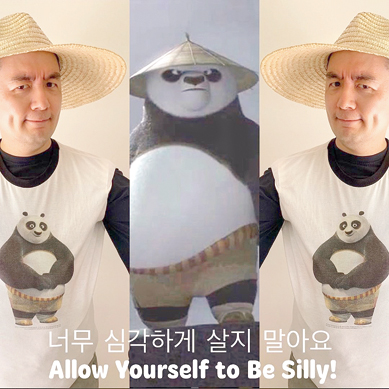 My small moments of happiness this week was taking these silly photos. We don’t need to be serious all the time. If we can find micro-moments of playfulness like a child, we can invite more joy into our lives. Do you agree? Tell me about your silly things you do once a while.
Sourced by the Telegraph

Tell us about your journey through social media.

Back in 2010, I think I started experimenting with Twitter, which was a relatively new platform for a lot of Korean people. I tried copying (Barack) Obama, who used to share his experiences of meeting new people and various aspects of his life. I would post “I ate tofu for lunch”, and that sort of thing, which I soon realised was very boring. So, I decided to change and instead share some of the wisdom that I gained from my meditation practices. Whenever I would see some pattern in my mind, I would write about it. People seemed to really appreciate my messages and I happened to grow my own audience. I really wanted to meet these people face-to-face. So, I devised an offline event. Only 60 people showed up the first time! Then it increased to 400 people and we would all meditate together and have conversations about life and provide many opportunities to just listen. People really want to be heard but nobody is listening to us. Taking turns, I got people to open up and talk about their lives, which turned out to be a healing process.

From that experience, I was inspired to write a book. I discovered a bunch of questions that most people were asking and my answers seemed to be resonating with them. Putting these thoughts and ideas together, with the help of a Korean publishing house, I could write The Things You Can See Only When You Slow Down: How to be Calm in a Busy World. The book became a bestseller for a year and sold three million copies in (South) Korea alone and was later translated to 37 languages.

You have said that social media is a tool just like any other and yet there are frequent complaints of harassment from strangers that take a negative toll on the mind. How does one address the negativity and maintain their sanity while using social media?

I learnt this ‘block’ function (laughs). The moment I see someone making all these negative comments, I don’t hesitate to block. Whatever you put out, you end up receiving the same quality of response. If you put out encouragement, positivity and love, 90 per cent of the time you end up getting it back as well. Most responses will be kind and encouraging. I started from a place of helping people with my writing. For example, recently I wrote a blog on my website for someone whose boyfriend very abruptly left them. And it seemed to really resonate with people.

Tell us about your School of Broken Hearts and the future plans of the school.

It’s something I started five years ago in Seoul and we now serve around 3,000 people in a year. I am collaborating with psychotherapists and coaches and offer all kinds of support groups. The second branch was in the city of Busan in South Korea. So I was just trying to see if this model can be transferred to other countries. I am tinkering with this at the moment. I don’t know what it will look like, but I do want to bring the concept to the rest of the world.

How do you think the world will emerge from this corona crisis? What are the things one can do to better themselves while they find themselves stuck at home for a year?

I believe that if you can’t change a situation you can change your attitude about that situation. If you keep saying that ‘this is terrible. I don’t like this’, you end up victimising yourself. Instead, if you say ‘This is what it is and I can’t do anything about it, but I can increase my own happiness’, you end up finding a silver lining in that situation. For example, I used to eat out a lot because I was always travelling but now my cooking skills have increased immensely. I pay attention and try to experiment with every meal I make! I also wouldn’t get much time to read as much as I would like to but now I have the time for it. 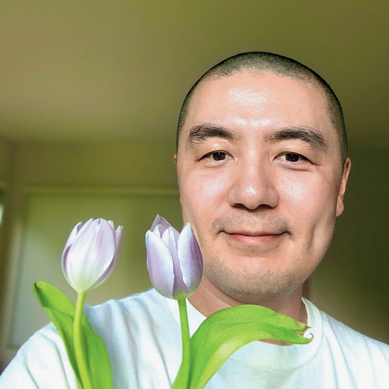 My small moments of happiness this week is appreciating the beauty of flowers. I wrote in my book that we should buy more flowers instead of lottery tickets. When I saw these purple color tulips, I had to get them. With such a small investment, it has made my room beautifully alive! What are your favorite flowers? Which color?
Sourced by the Telegraph

I try to commit to something I call ‘small moments of happiness’. We have a lot of big moments in our lives, milestones like graduating from college, marrying the person of your dreams, buying your first house or car. However, the small moments are equally important. For instance, I have some 20 close friends and I have their birthdays in my calendar. I like to call them a day before their birthday and it seems to make them so happy! I hope people use this time to do exactly that. The sky during the lockdown, for instance, was so clean, devoid of the usual smoke and bright blue in colour. Makes one realise how we have always put profit before environmental issues. Maybe these small realisations will dawn upon us and we can figure out things that we can do to change.

Did you have a particular audience in mind when you wrote your book?

I wrote it for all those nice and kind people who follow whatever their parents were saying, always doing the right thing while neglecting themselves. I know because I was one of them! (laughs) I always tried to please other people, always listening to my teachers and mom, striving at imperfections in the eyes of others. While I was doing that, I was neglecting my own needs. I would say that if you feel that you always want to please other people and because of that you have low self-esteem, my book would be a great addition to their lives.

Can compassion be taught to someone who is not keen on exploring themselves or find interest in self-discovery?

In our lives, you are bound to have some suffering or life disappointments, whether you are exploring yourself or not. You end up feeling sadness or depression. When that moment happens to you, it becomes an opportunity to become more compassionate, especially towards yourself. We are human beings who are bound to suffering. It is only when one gets an illness do they begin to notice all those around them who are suffering from the same illness. You feel connected and you wish for them to heal. So I think the path to being compassionate is through hardship.

What are some changes that educational systems around the world need to incorporate in their curriculum for well-rounded individuals in the future?

I think it’s time people taught a subject called ‘happiness’ in schools (laughs). Clearly all we want is happiness. You want to be successful because you want to be happy, right? So happiness is something we all strive towards, yet we are never taught how to be happy. What is it even? And how does one maintain peace and harmony in our lives?

And I also hope schools would teach us about money because money is such an important issue in our lives but nobody taught us financial literacy. A lot of people become victims of financial failure because they don’t know what to do. How to develop healthy physical and mental habits is also an important tool one needs to be equipped with.

And what would the curriculum for happiness even look like?

I have noticed how happy we feel when we form connections, with other humans, animals, plants, or anything in your surroundings. So, why not teach how to form and nurture those connections? I would maybe begin there…

Wisdom is often mistaken for intelligence in common parlance. How does one go about acquiring wisdom?

Silence, you know (laughs). When you become peaceful and quiet, you might stumble upon some new insight that you didn’t previously know about. Intelligence or intellectual ideas have to do with knowledge. The more you read, you have an intelligent mind. If you wish to be wise, I think you have to imbibe silence and peace into your life. You may be surprised with the kind of answers you might get in a moment like that.