He had no vision in his eyes. Instead, he had stars, and he plucked them one after another. His tale 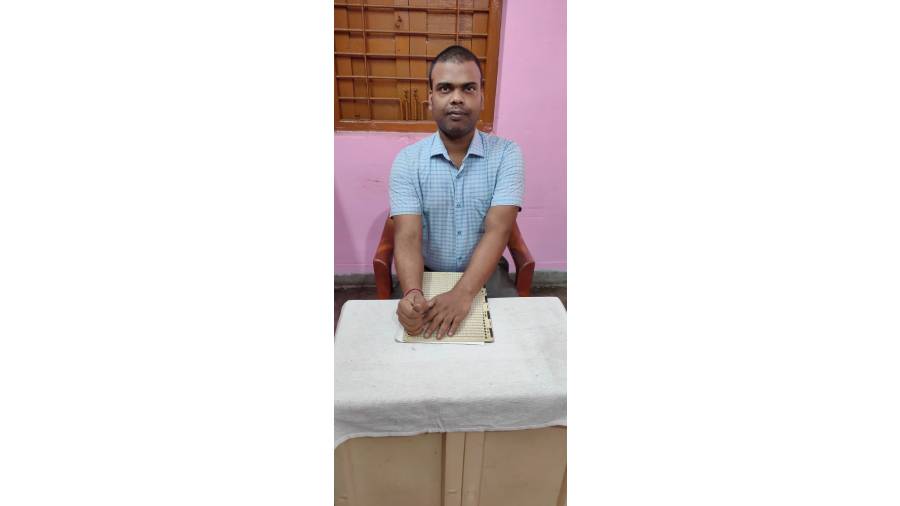 On a regular weekday, Sukdev Biswas wakes up around 8.30 in the morning, eats breakfast, gets ready for office and hops on to a colleague’s two-wheeler. The duo reaches the DRM Building, or the Divisional Railway Manager’s Office in Kharagpur, from his rented accommodation in Inda in 6-7 minutes. The senior clerk is at his office well before 10am, his reporting time.

This is where the commonality between Biswas and his colleague ends. The 34-year-old Biswas is blind. But that hasn’t prevented him from achieving all that he has wanted. Well, almost all...

Biswas joined this South Eastern Railway division in 2016 while in the second year of MPhil. He had two other job offers — as a middle school teacher and backward classes development officer in the state government. Forewarned by a senior of the bribery tangles in the latter, he dropped the idea. And the school job wouldn’t pay as well as the central government one. Finances were important for the boy who had spent many a day in his childhood on one meal only.

In the course of proving to the world that he was no less than the person at the next desk, he gave up on his first loves: swimming, which took him to the 2006 London Paralympic Games, and cricket. Biswas stopped participating in swimming competitions in 2014; his showcase boasts of a 100 gold medals and a lone silver. Studies took precedence. As for cricket, he capped it off with a man of the match award during the nationals at Jodhpur, Rajasthan, in 2016.

Technically speaking, Biswas is 100 per cent visually impaired, but he can see hazily enough to be able to move around without a white stick. He can make out figures and shapes but not the details. He was eight or nine when he lost his sight one summer morning. “I had woken up as usual, around 5.30-6am. It was pitch dark, so I assumed I had woken up early and stayed in bed. It was only when Ma called out for breakfast that I realised it must be at least 7.30.”

Biswas himself says he was a mischievous boy. So when he couldn’t find the way out, his mother assumed he was play-acting. “I burst into tears when I felt the warmth of the sun as I stepped out of the room, onto the dalan or courtyard,” he says.

His parents and siblings — two older brothers and a sister — were at their wits’ end trying to plead, coax, bribe, threaten him to give up his act. It was only when his friends came calling and he refused to join them that they finally believed something was amiss.

The father was a daily wager and mother a house help. They tried to provide him the best medical care they could afford. From Taldi, their village near Canning in South 24-Parganas, to a Garia hospital to Nil Ratan Sircar (NRS) Medical College in Calcutta.

“It was two months and 10 days into the treatment at NRS. In the evening I thought I saw my shadow on the wall, cast by the lantern. I moved and bent to check and realised I was right. But I didn’t tell anyone. I revealed it only when we visited the doctor a few days later. The doctor almost choked, he was so happy,” he says.

But soon after, his left side was rendered paralysed. “That was one time in my life when I had lost the will to live,” he says. What pained the young boy more was the gloom at home. “I would keep thinking about how to dispel this air of joylessness.”

The fighter in him surfaced. “That is my biggest asset, the har na mana monobhab,” he says. After four months of treatment, he got back strength enough to beat his friends in arm wrestling — with his left hand.

The family had no inkling that the blind could also study. But destiny willed Biswas to join the Blind Boys’ Academy (BBA) in Narendrapur. One brother worked at a tailoring shop, from where he’d noticed a blind man commute on a rickshaw. “Dada figured from his attire and carriage that he was no beggar,” smiles Biswas. “One day, Dada waylaid him.” Gopal Gayen happened to be an alumnus of BBA. That was the turning point in the blind boy’s life.

In BBA, Biswas found all facilities under one roof — knowledge, swimming, cricket. “I knew I had to excel in everything, most of all studies. I had to become self-reliant,” he says.

Biswajit Ghosh, the current principal of BBA and Biswas’s ex-teacher, has this to say: “Biswas has turned out to be a complete man. Good at studies and sport, a good son, husband and father, a sincere employee. He always chips in to help those less fortunate.”

“You have to lead” is something Biswas has heard from his “Biswajitda”. Ghosh had spotted this quality during a trek from Chandipur to Digha. “One of the boys had a defect in one leg. He was finding it difficult and trailed,” he says. “Biswas carried his rucksack and held his hand, guiding the boy on with his faint vision,” Ghosh continues, his voice full of love.

And lead Biswas did.

In 2006, when the West Bengal government ruled that colleges could not impart higher secondary (HS) classes, Biswas was in Class XI in the Narendrapur Ramakrishna Mission Residential College. In those days, BBA did not have an HS section.

Most boys dropped out. But Ghosh could arrange accommodation for some in Seoraphuli in Hooghly district and got them admitted to a nearby school. Biswas and seven others could be provided only basic boarding and a cook. “We did the shopping and when the cook didn’t turn up, I’d cook with help from the others,” says Biswas, in a matter-of-factly manner. All eight of them figured in the top-10 list of the school in the HS exams. 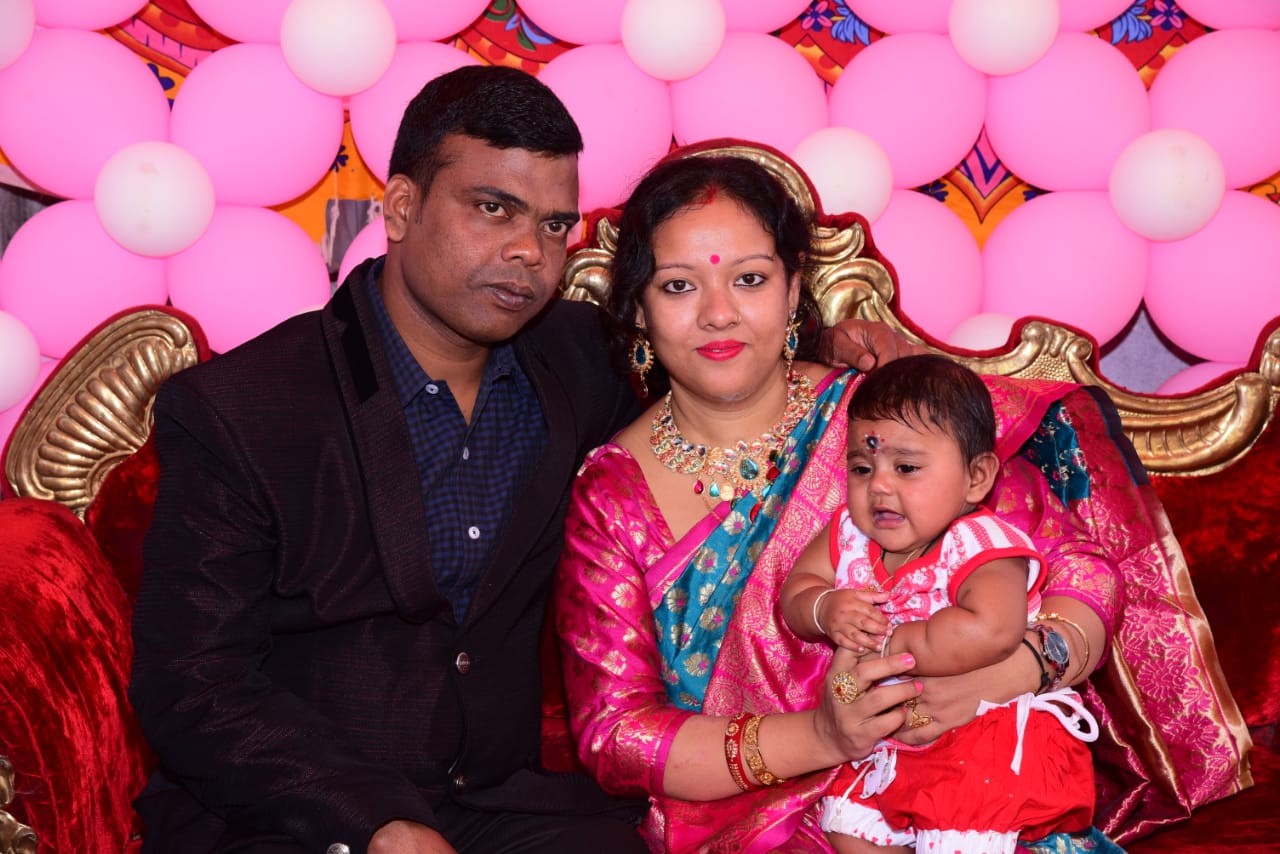 Biswas scored star marks in Madhyamik too. And secured first class grades in BA, MA and his first year of MPhil, from Jadavpur University, all as a general category student. With about half his colleagues laid off, there is no way he can take leave and complete his MPhil now. But having cleared NET and SLET, he hopes to join a college some day and resume his studies.

Helping him by reading out and recording study material on the audio system has been Swarnali, one of his classmates from Seoraphuli. Today, she is his wife and the mother of a four-year-old girl. They were married in 2016 even before Biswas had a job. And no, her parents had no objection to her marrying a visually impaired person. As her mother puts it, “Sukdev has proven himself to be better than my daughter — she could never beat him in studies although she has all her faculties intact.”