‘They are using Dalit votes for selfish ends’ 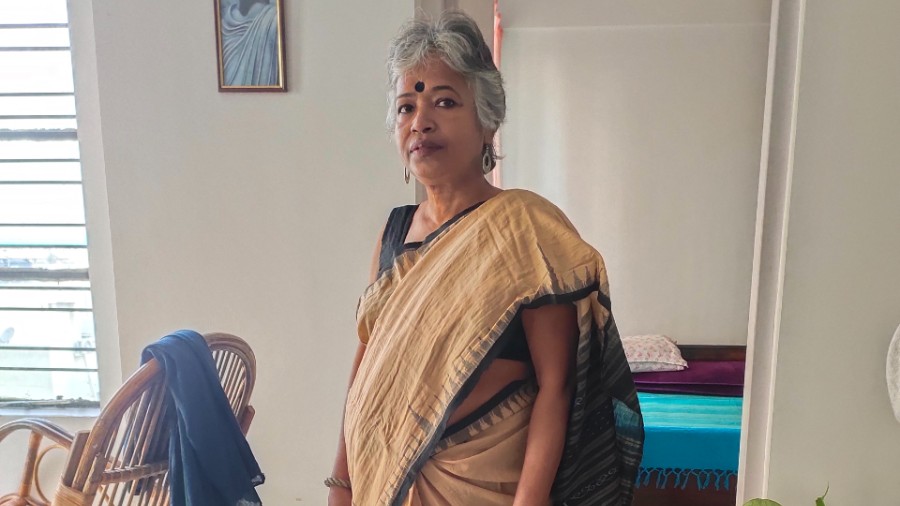 The first time I saw Dalit feminist writer Kalyani Thakur Charal was at a seminar last year, on the sides of a film festival in Calcutta. The theme was representation of Dalit women in Bengali films and one of the speakers was citing the example of the 2019 release, Mukherjee Dar Bou. The film — directed by Pritha Chakraborty — is a family drama with a woman playing the lead; it had nothing to do with Dalit women. Kalyani, who was among the invitees, got up and left the auditorium without any ado.

I remind her of the incident when I meet her for a video chat last week, and though she cannot recall specifics, she says, “This keeps happening. There is practically no representation of Dalit life and Dalit filmmakers in the (Bengali film) industry.”

Kalyani is first and foremost a writer, a “Dalit writer” she corrects me. Next, she is the editor of the Dalit women’s magazine, Neer. She is part of the editorial board of Chaturtha Duniya, a publishing house focussed solely on the works of Dalit writers. She is also a board member of the recently formed Dalit Sahitya Akademi. And, of course, she is an activist who has lent her voice to a wide range of issues including the Citizenship Amendment Act (CAA) and the National Register of Citizens (NRC).

After the initial frenzy post the pandemic outbreak — “raising funds, reaching funds, reaching help” — Kalyani admits that she found herself being swallowed by darkness. She says, “I am a very positive person, but death and images of death, the dead bodies all piled up, all of it got to me.”

And then came a time when she felt she had to write to be able to breathe and live and think again. That is how she came to write the lines: “…ei bhaabe paakhi aar kalo manusher onko mile jaye/Tokhoni bisheshon aashe porijayi naame”. Meaning — “This is how birds and coloured people become one and the same/An adjective blossoms, ‘migrants’.”

Kalyani belongs to the Matua community, frequently in the news of late given the impending Assembly elections. A 2019 report from The Telegraph quotes Matua leader Shantanu Thakur as saying: “There are five crore people in our community in India and Bangladesh; three crore live in Bengal.” It is believed that this community can impact votes in 70 out of West Bengal’s 294 Assembly constituencies.

“This tug of war (of political parties) with the community is hampering the Dalit movement,” observes Kalyani. “These Brahminical parties and leaders are diverting the Dalit votes to consolidate their power. None of this is about Dalit empowerment,” she adds. According to her, even the youth of the community have deviated from the original Matua ideology. “They are looking out for their own gains.” And then, without any seeming connection, says, “The olden chant of ‘Hari bol’ has been replaced by ‘Jai Shri Ram’ even in Thakurnagar (the bastion of the Matua first family in Nadia).”

Kalyani goes into the etymology of the word “matua”. It comes from the idea of an impassioned people — “naame preme matoara” — impassioned devotees of sect leaders Harichand and Guruchand Thakur, whom they consider avatars of Vishnu.

And what is the relation between Matuas and Namasudras? She replies, “Most Matuas are Namasudras, but all Namasudras are not Matuas.” And all Namasudras are Dalits who constitute a socially and economically marginalised community that has been granted special status by the Constitution — Scheduled Castes — and are entitled to concessions and reservations, and are the only category other than Scheduled Tribes for whom seats in Parliament and state legislatures are reserved.

I ask her about the surname most Matuas use — Thakur — and she says squarely, “It is an aabru, a veil. Thakur, after all, is a typical upper caste name. Most Matuas adopted the Thakur padabi after migrating to epaar Bangla (West Bengal). Its purpose was to save them from caste hegemony.”

But Kalyani writes “Charal” after her name, and has been doing so since 2009. Her autobiography is also titled Aami Keno Charal Likhi (Why I use the title Charal). After a sip of coffee, she says, her voice clinical, “To keep things transparent and simple, I decided to add Charal to my name. That’s all.”

But many people still believe that Bengal... I haven’t completed the sentence and she says, “...is free of caste struggles?” She continues, “If that is so, what was the Maroona Murmu incident all about?” In September, after Maroona, who is an associate professor at Jadavpur University, said on Facebook that an academic year could not be more important than a student’s life, a student heckled her. She drew attention to Maroona’s “Adivasi” background and told her that she was not qualified to comment on the matter. Kalyani points out, “There were thousands who supported the student. They were upper caste Bengalis. How would this support be possible if caste hegemony did not exist? It was all suppressed but now because of social media, it is all out in the open.”

“You would have heard there are no Dalits in Bengal and nothing called Dalit literature,” Kalyani says. “Mahasweta Devi herself had said that the word ‘Dalit’ has no currency in this state. Manoranjan Byapari (Dalit writer-activist) has recorded this in his autobiography... Bengal is not outside India and caste hegemony is prevalent in all of India. Or are we trying to say that Bengal is heaven?”

Kalyani’s father came to Bengal in the early 1940s and settled down in Bagula in Nadia. He was night-guard at a college, he had also worked at different points of time as a farmhand and a woodcutter. It seems Krishna Chandra Thakur had wanted a boy but Kalyani was born. Instead of cursing his fate or some such, Krishna Chandra decided to raise her like a boy. Says Kalyani, “I was sent to school. I used to dress like a boy. I would wear my hair short. I would work in the fields with my brothers. I would go fishing in the canals. Baba wanted me to know how to do all kinds of work.”

Kalyani’s voice picks up new energy while reminiscing about her father. She goes on, “He had no inferiority complex and in his own way he protested against caste hegemony.” She shares a story she has heard him repeat. Those days he was working as a woodcutter in Khulna or Barisal (in Bangladesh now). After a hard morning’s labour, when he settled down for a meal, Krishna Chandra was made to sit on the ground outside the house, well beyond the verandah. The server, an upper caste man, poured the hot daal from some height onto the banana leaf to avoid any contact whatsoever. She says, “My father used to say how despite the blinding hunger, he left the place, the food untouched and tears stinging his eyes.”

According to Kalyani, the structure of caste discrimination is inside each person; the one who is discriminating and also the one who is being discriminated. She narrates how every Durga Puja, her mother and other women could but catch a glimpse of the goddess and that too with a lump of gobor (cowdung) in hand. “Before they left the spot, they had to purify it with the dung.” Kalyani’s own childhood was different as she grew up in a neighbourhood where the Scheduled Castes were in majority. “But there were some upper caste households and those girls went to school with us. I remember little girls boasting, ‘My friend is higher caste’.”

Years later, Kalyani herself faced caste discrimination when she arrived in Calcutta for studies. She says, “The problem arises the moment a Namasudra tries to challenge existing caste hierarchies. And this usually happens in the office-kachhari set-up. There is ghrina and there is jealousy at work.”

Kalyani always foregrounds emphatically that she is a Dalit feminist writer. I ask her why. Why does she want to use the identifier Dalit feminist when a Brahmin writer does not feel the need? She says, “To begin with, the Brahmin identity is ujhyo... tacit; that is why there is no need to advertise it. Second, you should not confuse a Dalit feminist writer with any upper-caste woman writer. Our oppression is of a different nature. Our fight is not against patriarchy alone. We are also battling the huge generational lag in education. Upper-caste women writers look down on us. And that is why we have to create our own identity. And to do that it is important we start to put down our own history. Mahasweta Devi cannot be and is not representative of Dalit women.”

After 73 years of Independence and a succession of political parties at the helm of the state, the situation of the Matua community has improved somewhat, concedes Kalyani. Won’t CAA put a spanner in that development? She replies, “Of course. For a people who had no ground beneath their feet, the CAA would mean double jeopardy... We want unconditional citizenship and we are not going to show any papers. This has been our demand since 2003 and it remains unchanged.”

Kalyani is loath to comment on any political party, but she says it makes her sad to see how the Matuas have got divided on the issue of NRC, CAA and NPR (National Population Register). She says, “There is Shantanu Thakur who has been elected from the BJP. And there is Mamatabala Thakur who represents the TMC. I believe both of them want the same thing but they are both being misled.”

1965: Thakur is born to Krishna Chandra and Renuka Thakur in Bagula village in Nadia district

1982: Moves to Calcutta and completes her school-leaving exams

1987: Graduates in Accountancy Honours and joins the Indian Railways as a lower division clerk

1993: Starts Neer as a wall magazine and, in 1994, turns it into a full-fledged yearly publication

2014: Takes voluntary retirement from the Indian Railways in protest against unfair practices

2017: Is awarded the Sparrow Literary Award for her autobiography Ami Keno Charal Likhi