Profiling a rare and classical specimen of citizen journalism 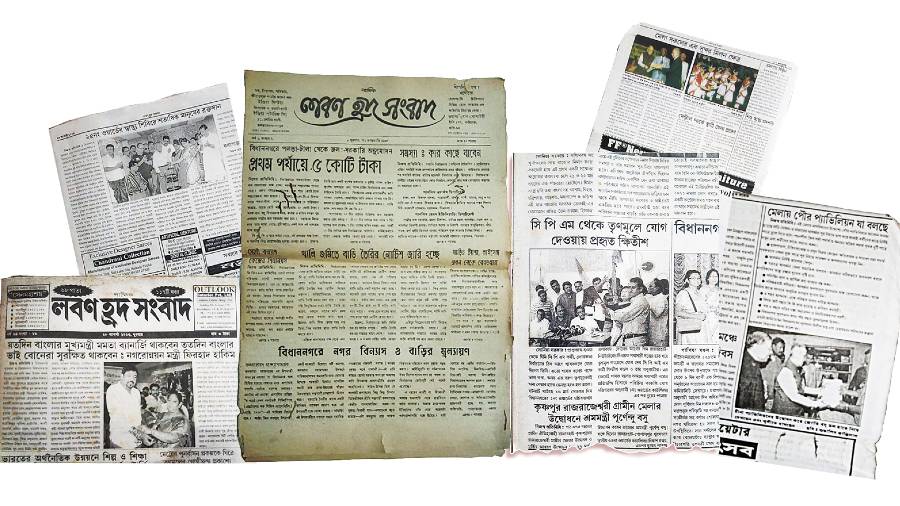 SATELLITE NEWS: Laban Hrad Sangbad through the years
Sourced by The Telegraph
Uddalak Mukherjee   |   Published 27.12.20, 12:06 AM

I’d love to rise from the grave every 10 years or so,” the master filmmaker, Luis Bunuel, is believed to have said once, “and go and buy a few newspapers.”

Had Bunuel lived in Salt Lake, where organised habitation began in the 1970s — the satellite township turns 50 this year on the basis of this estimate — he would have certainly bought copies of the Laban Hrad Sangbad, one of the last surviving local newspapers in and around Salt Lake, during his decadal resurrections.

Newspapers are the proverbial mirror of life and times. And Bidhannagar’s many visages have shone on the pages of Laban Hrad Sangbad that was started 30 years ago by Sudhir Dey. Time may have turned Dey a touch taciturn, but he can still fondly recall his days as an engineer in Dusseldorf and Stuttgart. The word on the streets of Salt Lake has it that Dey is even fonder of his paper and the manner in which he took on many an unscrupulous sword with the strokes of his mighty pen.

Old residents of Salt Lake still recall Laban Hrad Sangbad’s sustained coverage of a number of prickly civic issues over the years: contentious tax evaluations by the tax authorities; campus encroachment and so on. The printed word would bear out these sepia-tinted memories. Some of the headlines in the old editions of Laban Hrad Sangbad — the bold font hasn’t quite faded away — highlight the dilapidated state of Salt Lake’s water works (February 28, 1990), the worrying spread of typhoid in the locality (February 14, 1990), a blood donation camp in Ward 25 (August 28, 2013), celebration of the Calcutta Utsav and so on.

“Laban Hrad Sangbad is essentially the oldest surviving example of citizens’ journalism in its classical form,” said Ananta Padhi (Bijoy), who has been an employee of the newspaper for three deca-des. “Local news has been the paper’s traditional flavour. That explains its relevance and popularity,” he added.

Bijoy firmly believes that the paper’s political neutrality played an integral role in it surviving changes in political regimes. “We have been balanced in our treatment of news, no matter who has been in, or booted out of, power.”

The political sceptre changed hands in 2011 in Bengal. There have been changes over the years within and outside too. Salt Lake, much like Laban Hrad Sangbad, has undergone numerous transformations.

Bijoy reminisced that the area where City Centre now stands was a “jungle”; the site where the Bidhannagar Mela takes place, he said over the phone, was once a vast, verdant stretch. Nalban, too, had not been conceived. Jhilmil — Laban Hrad Sangbad called it a dreamland (swapnapuri) once, perhaps in jest — still held Salt Lake and Calcutta under its spell.

Laban Hrad Sangbad has had its Kafkaesque transformations too. Initially, the labour-intensive process of printing used to take place in College Street. Later, the printing shifted to Sangbad Pratidin’s premises for a bit. Computers, Bijoy remembers, were introduced in 1996. “That hastened the pace of work,” he said.

But the recent changes are worrying for Sanjay Dey Dhara, Laban Hrad Sangbad’s current news editor. There has been a precipitous decline in advertising revenue ever since the pandemic set in, forcing the paper to cut down its publication from two to one monthly edition. Circulation has suffered with even faithful readers unwilling to take newspapers on account of their nervousness about the spread of infections.

“We have been forced to cut down on the number of pages. We have had to freeze new recruitment. Generating content has been a challenge too because of the low number of advertisement. We are even publishing news from Calcutta on occasion to fill the gap,” rued Dhara.

Laban Hrad Sangbad shares the agonies faced by the other members of the print fraternity. “The rise in the cost of newsprint has been a formidable challenge. Reading habits are undergoing changes too, with younger members of families who have subscribed to our newspaper shifting their allegiance to the digital media,” sighed Bijoy.

“There were several local publications that catered to the locality. Only we have managed to survive, for the time being.” There was no trace of pride in Dhara’s voice when he said this. Only sadness. Salt Lake’s graveyard of local newspapers has gravestones with names such as Sushambad, Nagarik Sangbad, Salt Lake Post and so on.

An archivist of the future would certainly understand the value of the lives of local publications in chronicling micro histories; but not the government.

But Dhara and Bijoy have pledged to soldier on. Bijoy ended the conversation by saying, “Informing people remains our primary responsibility and we would like to continue doing that for as long as possible.”

Does that herald the hope that when Bunuel rises from the grave again for his sojourn, he may still be able to buy a copy of the Laban Hrad Sangbad?