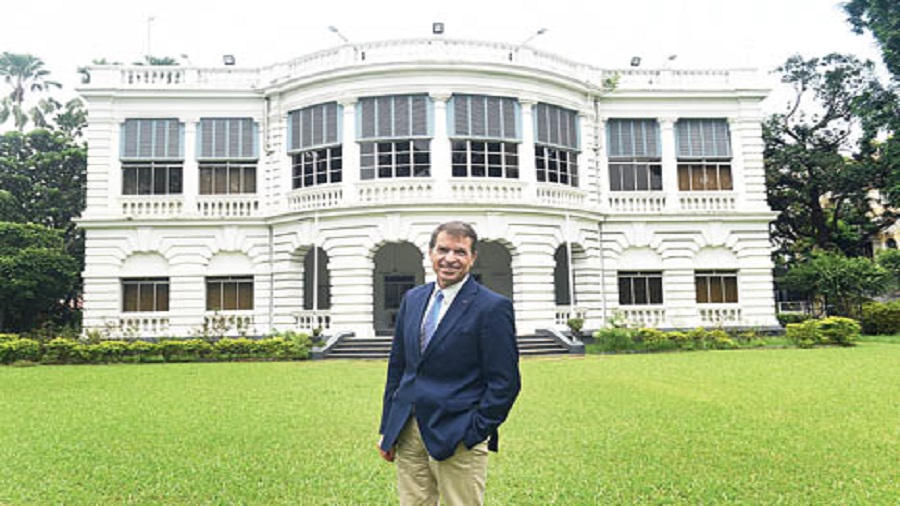 German consul general Manfred Auster took office on September 28, after spending a fortnight quarantined in Taj Bengal. He met The Telegraph for a socially distanced chat on the consulate lawns.

Welcome to Calcutta. Where was your last posting?

Thank you. For the last four years, I served as ambassador of Germany to Haiti, in the Caribbean sea. Before that, I have been in different incarnations to Vienna, Kiev, Canberra, Bonn, Budapest, Brussels, seven years in Canada…

So you have served across Europe, in Australia and in North America. Is this your first posting in Asia?

Yes, although I always wanted to come here. You see, my father was an Orientalist. I had a map of the Indian subcontinent in my room for five-six years. My father gave it to me on my 10th birthday. This year, I was supposed to be posted to Myanmar. Then a last-minute opportunity came up to switch for Calcutta.

How difficult was this decision to choose India when it is among the top three Covid-hit nations?

Most parts of the world are pretty bad. I spent some weeks in transit in the US where my son is studying in university in Washington DC. There the numbers are even higher. If you are prudent and take all the necessary measures then I figure it is manageable.

How was the first week at work?

It was characterised by the transfer of charge from my deputy, the acting consul general, who is leaving. But, most importantly, I wanted to meet my new colleagues. So on the first day, we had a short meeting outside with the entire staff. During the first few months, I suppose I will be on the listening side, getting a better understanding of the situation here.

What impression of India do you have? Your father, you mentioned, was an Orientalist.

My first impression is of diversity. You have so many languages, ethnicities…. My father’s message to me was also about the tolerance prevailing for millenia in Indian culture between different faiths. That I hope will continue. There are tendencies in other parts of the world to misinterpret tolerance as something negative. That is not the Indian tradition. I am curious to learn how India is coping with a huge discrepancy in wealth.

Over the last few days, I have been reading the papers. People seem to be aware of the environment. The lessons in your ancient texts seem to translate into public discourse, in discussions on mining projects, about what happens in the Sunderbans delta when fishermen go into the forest and unfortunate encounters happen…. In Western countries, there would be a call to kill them (man-eating tigers) if they endanger human lives but here it is seen as a tragedy that needs to be worked around.

Tell us about your father. Was he an academic?

Yes. He started studying Japanese but in the late 1920s he developed an interest in Buddhism. He was active in the German Buddhist Society that had its nucleus in Berlin. There were extensive exchanges even before World War I between Germany and India, where Buddhism comes from. That shifted his interest from the Far East to the South East, from Japanese to Pali. When travel became affordable in the 1960s, he told me that he would take me to India after I finished school. We did that in 1979 for seven weeks.

Where did you go?

We travelled more in the north — Delhi, Rajasthan, Agra, Lucknow, Benaras, coming over to Calcutta for a few days. We probably tried to put in too many places in too few weeks. We also went to Bombay and Madras, as it was called. I was 19 then. I came back on my own the next year for two months, visiting the Tibetan community in Dharamsala and McLeodganj — His Holiness the Dalai Lama wasn’t there but one got the feel. I went to Amritsar, then crossed over to Pakistan, visiting Lahore, Peshawar, Khyber Pass...

Congratulations on the 30th anniversary of the reunification of Germany.  Where were you when the Berlin Wall fell?

I am born and raised in Berlin. I was at the end of my legal training in 1989 when the wall came down. I saw the famous press conference of an East Berlin party leader who made the mistake of reading out a paper about travel possibilities which should have been published a day later and which led to the Wall collapsing that very night. Living on the western side of the wall, I went to one of the checkpoints, where not much was happening. About 50 people had gathered and we slowly walked to the eastern side, without the border guards challenging us. On that side, there were 200 people. We told them how we had crossed without being checked and we told them: “Let’s see if we could do it from this side”. They were hesitant at first and asked a guard if they could go over and come back in. The guard said: ‘It’s still illegal but it doesn’t matter. It’s all over.” The scenes you saw on TV took place half an hour later, with all the people from the east streaming in and the police trying to regulate them. The night of November 9, 1989 is when Berlin came together — and I saw it first-hand — though legally it was not until October 3 the next year that Germany was united.

You must have been among the first to cross over without having to show your papers!

Yes, I have never read in any documentation about people going from west to east that night. I did not know the others in our group. I have no contact with them. The next day West Berlin was full of people from the east, experiencing the place, popping bottles —  a happy atmosphere.

The embassy in Delhi recently posted a video to mark the reunification anniversary, bringing musicians of the two countries together. Your comments.

His Excellency Ambassador Walter J. Lindner is a great musician himself (he plays guitar and synthesiser in the video). He has done quite a few gigs with local musicians not only in India but also on previous postings. He had the idea to produce with Indian musicians the song Winds of Change, sung originally by the leader of the German rock band The Scorpions (Klaus Meine), which is regarded as the unofficial anthem of the reunification.

Calcutta shares a passion for football with Germany. Are you a football fan?

I do not play but I’m a dedicated fan of one of two Berlin teams that play in our premier league — Hertha BSC. It is from what was West Berlin, where I grew up.

What are your preferred leisure activities?

I enjoy golf though I don’t have a handicap. Some of the oldest golf courses in the continent are in this city. I hope I can improve on my skills during my time here. In the last four years, I have intensified scuba diving. I am now what they call a master scuba diver. I also like hiking. As my consulate district includes Darjeeling, where one can go close to the mountains, as also the seven sisters, I hope to find time for excursions during my travels for the mission.

With the pandemic raging, how much of the city have you seen?

So far I have been only to places where social distancing is possible. I went to the Maidan, Prinsep Ghat, the bank of the river, I looked at Victoria Memorial from outside… I also checked out a mall. I am pretty sure it wasn’t there when I was here in 1979. (Laughs)