Advertisement
Home / Culture / People / If at a time like this, a trick
Big Story

2020 has been the kind of year that had most of us wishing desperately for some magic. Magic to petrify a virus. Magic to conjure the perfect vaccine. Magic to vaporise the gloom. Magic to make the economy boom. Magic, if just to offer us a moment of sparkle. At such a time,lets check on those who are in the business of magic 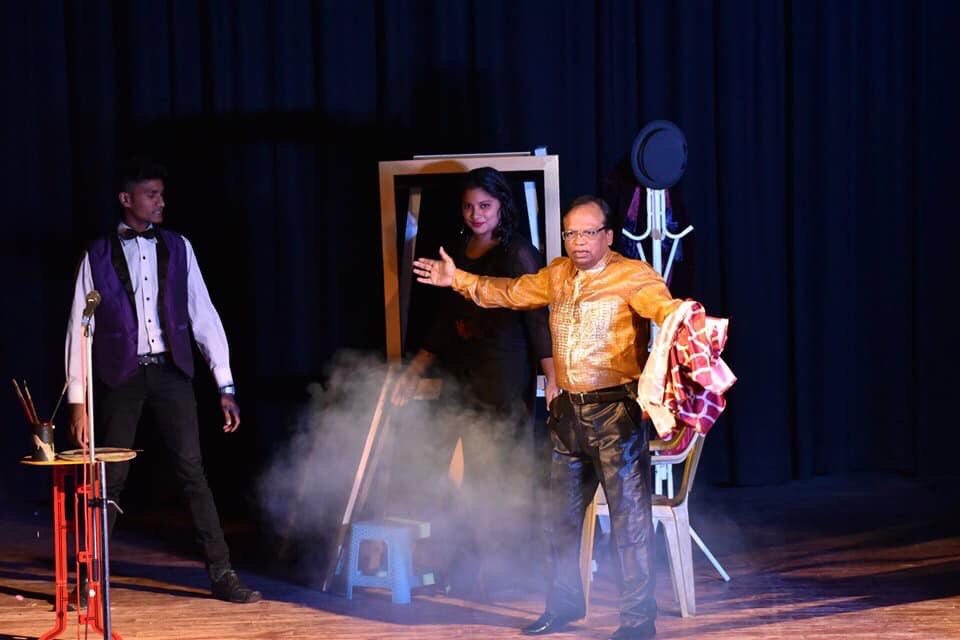 An early lockdown scene from a home shelter for migrant labourers in Delhi — rows of masked figures sitting on the floor with enough space between one and another. Standing in front of them is a stout man in a dapper suit. He tears a paper right down the middle, then into smaller pieces and smaller, then cups his hands and shakes up the pieces. The next thing you see is that he is holding up a currency note. Another note peeps out from behind the first and then another and another, till it is more than a handful and the notes fly out of his hand and onto the floor.

Having magician Raj Kumar entertain these stranded men and women was a Delhi government initiative. But it was Raj who reportedly got in touch with the authorities in the first place, offering his services free of cost with messages about social distancing and the new hygiene drill woven in.

There is a reference to Raj — who is general secretary of the Society of Indian Magicians, winner of the International Merlin Award, talent scout and teacher to “semi pro-mystifiers” — in the introduction to John Zubrzycki’s book, Jadoowallahs, Jugglers and Jinns: A Magical History of India. In his book, Zubrzycki also makes several references to Bengal’s magic legacy. He writes how Mughal emperor Jahangir was enthralled by Bengali jugglers and their rope trick.

The rope trick actually involved a “chain” thrown up skywards and then in well-timed succession, a dog, a panther, a lion and more — sent up only to disappear into thin air. Jahangir had apparently given the troupe

Rs 50,000 and ordered his amirs also to donate generously. Zubrzycki refers to the Bengali jugglers as ancestors of Raj Kumar’s troupe.

The preoccupation with magic endures in Bengal. There are 700-odd magicians in the state today, according to magician Abhisek Sarkar.

A pre-lockdown scene. A queue of men and women surrounded by a hive of excited children at the gates of Birendra Mancha, a small auditorium in north Calcutta. They are waiting for the 6pm magic show by Sarkar. The Rs 70 and Rs 100 tickets are sold out. What is remaining is a clutch of Rs 150 and Rs 200 tickets.

And the show begins.

The spotlight, red, pours onto the centre of the stage, the curtains part and the magician appears. Clap, clap, clap and hoot. Whistles. Sarkar, 32, is dressed like an Indian groom — red sherwani, beige churidar and a glittery red turban. A young girl, dressed in a shiny black dress, walks in with two tall glasses on a tray. One glass is full of water and the other is empty.

Sarkar gives the glasses a shake and voila! A fountain of confetti and a Tricolour spring out of the empty glass. The children are now beside themselves with joy; they are clapping furiously and jumping up and down. Over the next two hours, Sarkar transforms an umbrella into a candle, gets a live white pigeon to fly out of a photo frame, cuts up a moustachioed man into two and makes him whole again. With every act, the element of dare-devilry goes up a notch.

Talking of dare-devilry, two years ago, magician Chanchal Lahiri, who used to go by the moniker Jadugar Mandrake, drowned in the Hooghly river during a live performance. He was attempting an underwater escape act popularised by the legendary illusionist Houdini. The stunt required a blindfolded Lahiri with his hands and legs tied to escape from a cage at the bottom of the river.

The act did not go as planned. Lahiri did not come out of the water and was later found dead. But the incident drew attention to the world of magic and the lives of magicians.

Says Sarkar, “In the 1980s and 90s, magicians would do school shows. Now, we are approached by corporates to help them advertise their products, by local governments to spread awareness about malaria, dengue, even political messages.” He talks about how the pandemic led to a proliferation of online shows, and this has necessitated a change in the format of magic performances. Sarkar says philosophically, “The definition of magicians has definitely altered over the years.”

The glass cabinet in Sarkar’s residence-cum-office-cum studio is lined with magic games and tricks with names such as finger-chopper magic, mind-blowing dice, amazing drawer box, threading the needle, flash dice. According to him, the acts of today could be classified as close-up, conjuring, semi-illusion and illusion.

“Online shows are more about close-up and conjuring,” he explains.

Close-ups include party tricks where there is not much physical distance between the audience and the magician — an example would be card tricks. Conjuring is for a slightly larger audience. Semi-illusion is something like making rabbits and pigeons appear and disappear. He says, “The shows audiences will pay to watch are illusion acts. It is a stage act and you have to manage a team that helps in light engineering and synchronisation, music coordination and stage decor. One needs Rs 1-1.5 lakh for such shows. It requires a lot of practice. Illusionists have to do dramagic, a combination of both drama and magic.”

But it seems that while the state government has allowed magicians to put up shows where the maximum audience strength is 50, it is not a cost-effective option.

“The physical shows started in November but we are not expecting a return to business as usual till June-July,” says Ajoy Das, who goes by the show name of Magician O-Joy. The 64-year-old had once been a part of P.C. Sorcar’s All India Magic Circle. Now he performs at creches and parties. His rabbits, Chinku and Minku, are the stars of birthday shows. He continues, “Birthday shows are slowly starting. During Kali Puja, I was invited to do a magic show at Baguihati. I am in talks with a north Calcutta mall about doing a show sometime year-end; then there is a wedding booking in Murshidabad.” 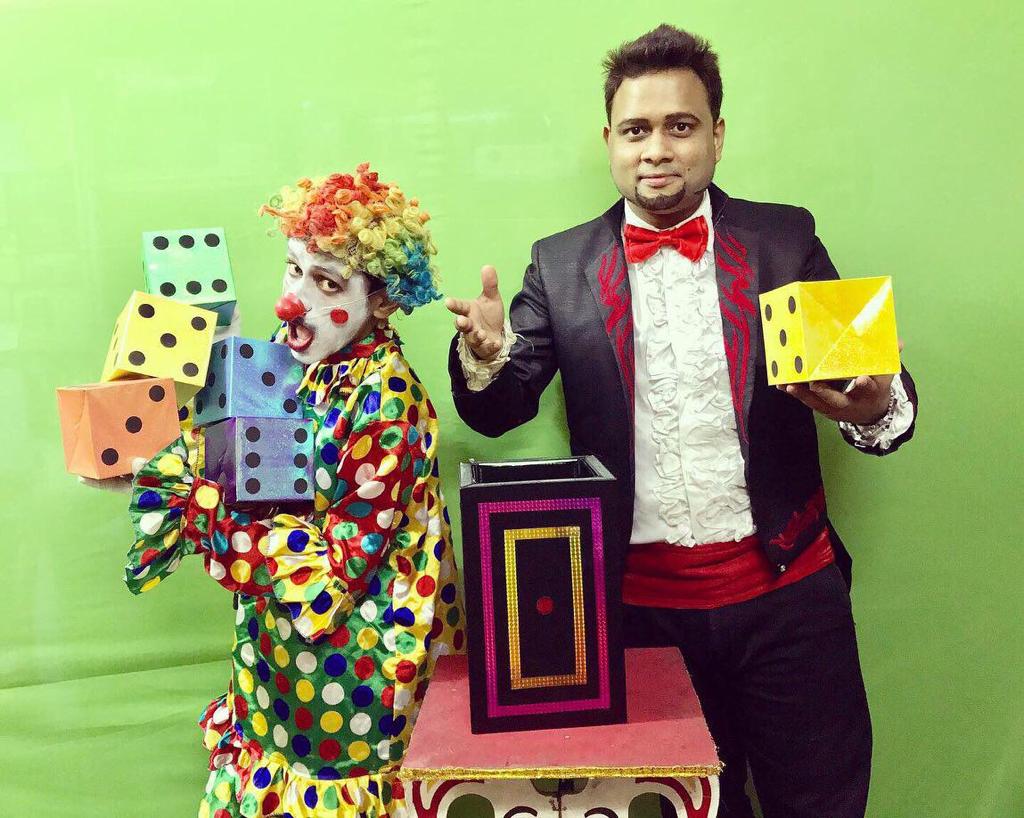 Neither Sarkar nor Das trained to be only magicians. Sarkar has a degree in law, Das retired from his day job as chief controller of operations in Eastern Railway’s Howrah division in 2016. Rakesh Kumar Singh, 21, is a conjurer and a ventriloquist and often assists Sarkar during stage shows; he is a school dropout. Each of these people has a different take on magic.

According to Das, magic is a kindred of science and by itself belongs to the category of performing arts. For Sarkar, magic is “roopkatha” or a fairy tale. “It is the magician’s responsibility to transport his audience to a different world, a fantasy land, through his acts,” he adds. Singh calls it his “nesha” or addiction.

Low science, high art or pure fantasy, it is a fact that till the pandemic broke out magic was a source of livelihood for many. As Das says, “It helped people earn tuk-tak… a little here and there.”

Sarkar has turned the first floor of his two-storey east Calcutta house into an office-cum-studio. He calls it Magic World. Till March, this is where he taught magic to over 500 students between eight and 80 from a variety of backgrounds — engineers, doctors, retired professionals, housewives, children. And while it definitely brought in decent money, he now puts a pedagogical spin to the arrangement. He says, “Schools to churn out magicians did not exist till around two decades ago. This is possibly one of the reasons why magic as an art form did not flourish. In fact, it has always been this gupt vidya or secret knowledge to be handed down to a chosen one from immediate family or a disciple.” Magic World came up in 2006 and today it has three branches across the city. Those apart, there are other institutes in India, such as the Delhi School of Magic and Magic Planet.

Sarkar’s students would come from all parts of the country — Kollam, Bangalore, Raipur, Odisha. They would stay for anything from 10 days to a few months to learn a couple of tricks. Eleven-year-old Antarjit Das would take the local train from Santipur to Sealdah every week for an hour of magic class. Rupsha Mollick of Hooghly district used to be accompanied by her parents whenever she undertook the four-hour commute. Says Sarkar, “Chitradi is 52 and she used to come from Madhyamgram. A lot of people would come from Bangladesh too.” It seems the bulk of the lessons has now moved online, and there have been plenty of new enrolments too. Sarkar seems to think that not all of it is done with earnings in mind. “Children and adults alike are feeling bored and depressed in this period,” he says.

Singh promotes his magic acts through social media videos. So does Sarkar who has a website and a YouTube channel. But not every student of magic becomes a magician.

Manufacturing props for magic shows is also good business. According to Sarkar, India supplies 30 per cent of the world’s magic-related products. Fifty per cent of this is from Bengal alone. Sarkar, who has a finger in this pie as well, tells The Telegraph that in the last three months he has been getting 1,500 orders a month, at the very least. What kind of props? He replies, “Dream bags, appearing canes, stiff ropes, colour changing wands.”

From the looks of it magicians or no, everyone is hungering for a spot of something magical.

Magic belongs to the magician

A chat with Mumtaz Sorcar