Advertisement
Home / Culture / People / I want to play a greater role in education in the country: Sanjiv Goenka

I want to play a greater role in education in the country: Sanjiv Goenka

If we can inculcate a sense of achievement in success, that propels you like nothing else does 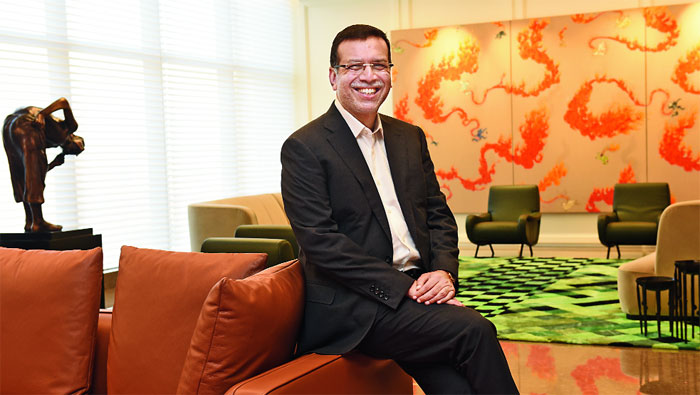 Education is close to your heart. So, did the honours come as a surprise?

I think any recognition of any form is pleasing… is welcome. When it comes from reputed institutions, it becomes that much more meaningful. Was I expecting it? No, certainly not… no clue. But I am very happy that I have got it. To my mind, whereas I am the representative, it is actually a recognition of the group’s (RP-SG Group) efforts in the last few years at having reinvented itself, at having changed itself.

Yes, education is close to my heart. And, increasingly I want to play a greater role in education in the country. I do believe that it is one of the ways to influence the future. You know, sometimes the education standards are not quite up to the international level. Now that the world is an integrated society, education is important for the future of India. So, if you can have international quality education and systems, it makes a different life for students. The idea is to give something that is top quality.

It is very fascinating when you meet young, sharp minds and interact with them. The range is huge.

Is a school in the pipeline?

We are building a school in Alipore. We have bought the land, the plans are ready and we are submitting for approval now. This will be a great school. It is Shivika’s (daughter-in-law) project. We have three management institutes now, which is run under the brand name of IMI (International Management Institute). This will be our fourth initiative in the field of education.

Do you wish you studied more?

No. I don’t feel the absence of formal education in that sense. That is very relevant in the first five-six-seven years of your career. After that it is your experience and your ability that drives you forward.

What was your dad’s (R.P. Goenka) take on education?

In our family, our parents were very detached from our education, which is unlike what Preeti (wife) and I are with Shashwat (son) and Avarna (daughter). We were eight cousins growing up together. I think there wasn’t any great emphasis given in that sense. You had to do well and if you didn’t, you’d get beaten up or scolded, but that was it. I don’t think anyone even asked me why I chose what I did. There was no discussion.

Our family was a little different. They believed more in the practical side of education. They said I should go to St. Xavier’s which is in their words, the “most grounded” institute. They wanted us to be grounded. So, it was the value systems which were more important. It is about how you treat your elders, cousins, servants. When Shashwat refers to servants at home, it is always ‘aap’. I have seen my parents do it and he has seen us do it. My parents would always say ‘socho woh doosra aadmi kya sochega’. As you grow older, the importance of that syncs in.

St. Xavier’s also… it keeps you grounded. To us, this is what we were taught. Education is not purely about academics.

So, do you remember the 15 years you spent there?

Vividly. Very strict. Regimented. But our home was even more regimented. So, for us, this was a release.

Your kids were good students…

We knew they were highly capable. They both were toppers. Avarna was very mature. She knew exactly what she wanted and how to get there. Sorted. Her aim was to become the head girl of the school and she became. She calls me chacha. A day before she said: ‘Chacha, I am standing for these elections.’ I asked what are the chances. She said zero. I didn’t know she knew she was winning hands down. Academically, above 90. I don’t think she cared whether she got 94 or 96 or 98.

I kept telling Shashwat that no one in the family has got an all-India ranking and he was capable. When he was young, he would say he’d have to study eight hours more to get those extra five marks which will eat into his playtime and so it’s not worth it. I told him, in one semester make that extra effort. If you feel happy, then carry on doing it. If not, you’ll never hear from me. Once he did it and he topped in every subject and he never looked back.

Success. This is what we wanted to imbibe in our children. And, this is what I believe we can through our education, through our schools. If we can inculcate a sense of achievement in success, that propels you like nothing else does. Each person is cut out differently and not meant for similar things. When I see my grandchildren… five-and-half (grandson) and two (granddaughter)… his teachers have twice told Avarna that let him take a double promotion. She has said ‘no’. Her logic is he is getting used to the taste of success. If he goes with a batch of kids elder to him, he may still do well, but he may not lead and she doesn’t want him to get complacent to the idea of not leading. Subconsciously, you are trying to inculcate a sense of leadership in not being satisfied with not leading.

The two-year-old is asking me since I got the doctorate degree, will I be giving out medicines! (Laughs)

What kind of books did you read while growing up?

I was an avid reader when I was in school. I used to read at least two or three books a week. I started off with Enid Blytons… The Famous Five, The Secret Seven… reread them… Malory Towers… I would remember them by heart. Then I went into Agatha Christie, James Hadley Chase, Alex Haley… then it went into biographies. Now I have stopped reading. Preeti reads for two hours every day. I have time, but I just find it a strain to read. Preeti says it’s an excuse! (Laughs) I still read from time to time, but I can’t read for long stretches, which I could do before and I would love doing it.

For me, the biggest learning came from my great grandfather’s biography… it is not a published book, but he wrote about his life. There were a lot of human lessons. Being the head of the family, how he dealt with a large, joint family and how important it was to not just be equitable but optically equitable. I am spending time with a person like Harsh Neotia more than before because he influences me philosophically.

What kind of films do you watch?

I watch virtually every Hindi film. I haven’t watched for a while. I am on Hotstar, Netflix, Amazon Prime. Right now, I am watching The Family Man. When you become a producer of movies (Yoodlee Films, a Saregama initiative), you see it completely through a different lens. For me, it is my grandchildren who are great de-stressers and movies.

You have explored so much…

It is about having a complete life.

Do you have a favourite?

If I have to choose one, it’ll still be work. But I am enjoying it all.