A design dialect that breathes modernism into craft traditions 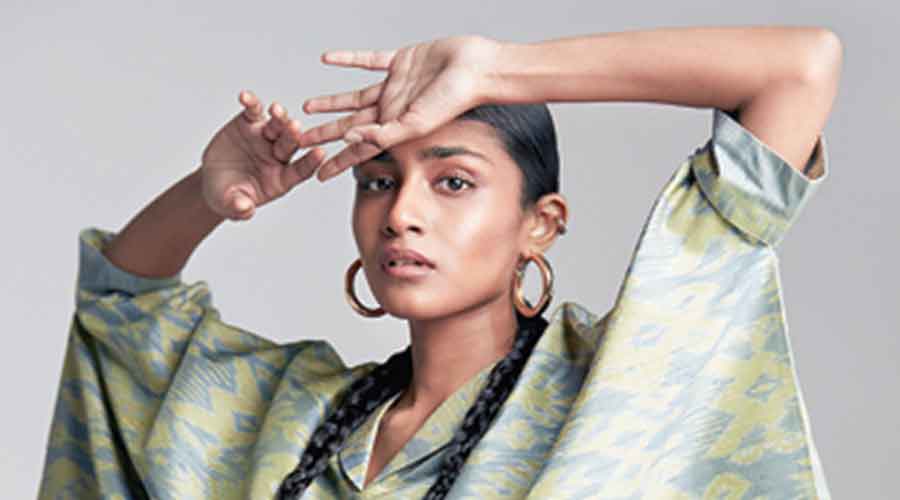 Born in the hands of the custodian of a 600-year-old legacy in textiles, Alamelu is a label steeped in Indian heritage yet designed to be agnostic towards regional affiliations and universal in its wearability. This ceases to be a paradox if you meet K.H. Radharaman, the founder, CEO and principal designer of The House of Angadi, creative director of the design label Advaya, and now, of Alamelu, and who can be credited for innovations such as the Khadi Kanjeevaram and the Benarasi Khadua georgette. For Radharaman’s idea of sustaining our Indian crafts, textiles and techniques is simple — “modernise and contemporise them”.

This can be seen in how the engineer-turned-self-taught textile designer has approached Architexture — the debut collection of his ready-to-wear label. With inspirations ranging from Le Corbusier’s take on creating universal designs in architecture using local elements, circa the modernist movement, and motifs ranging from the houndstooth to the Yayoi Kusama-like polka dots, Radharaman uses ikat and renders it into contemporary silhouettes and manipulates its texture to make it speak a universal dialect of design. In a chat, he talks design and the DNA of Alamelu: 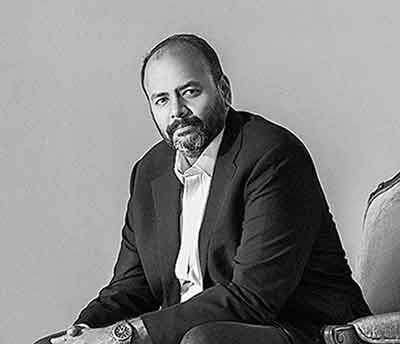 Where does Alamelu fit into the sphere of the textile legacy of your family and your ideas of modernisation?

As someone who has inherited this legacy, it’s a weight on my shoulder in certain cases but it is also a privilege. Launching a contemporary, ready-to-wear label that actually aims at an international audience for me is a natural progression because it enables us to carry the legacy forward to a larger audience. I am a traditionalist in my outlook and like to preserve many traditions that are related to the textiles and crafts of India. But at the same time, I think the way to do that is by contemporising and modernising it, without losing its essence. So this is a natural progression for me and I don’t see them at odds with one another. In fact, I would say that this is the best way I could think of to sustain this legacy and take it forward.

Can you decode the DNA of this ready-to-wear label?

The DNA of Alamelu is that of a modern Indian brand which is rooted in India but is from India to the world, because if you see the design language, it is a departure from what you would associate with Indian craft — whether it is the use of ikat or whether it is the use of texture. I have taken the same skill set and used them in a very different way and made it contemporary to the point that you don’t attach any particular region or any particular craft or design language to it. It kind of crosses boundaries in terms of its design language so it is making our crafts more accessible to a global audience more easily. This was something that was on my mind for a very long time. The idea is not new but putting it together under a label and in its present form is something that we started contemplating a year ago. The driving force behind Alamelu was to articulate a design language truly international, yet which is rooted in India.

How does “architecture” and “texture” fuse into Alamelu’s first collection called Architexture?

The specific aspect of architecture I referenced here is different. There was a phase when I was very caught up in the modernist movement in architecture and the one who is the most closely associated with it is Le Corbusier. I researched his works extensively for various reasons but more out of intellectual curiosity than to design this collection. The common thought that emerges in this label and collection is the fact that the modernist movement gave rise to a different language that is truly contemporary and not associated with a particular time frame or region. Modernism is a universal language and what I am trying to achieve with my designs, textiles and clothes is also something in that direction. Not that other people haven’t done this before but using local material and local craft for the world is also a Corbusier idea. So this collection is a confluence of all those ideas coming together.
Ikat, for me, is one of those techniques that we in India have several different iterations and craft clusters of and is also a shared legacy with many countries, such as Indonesia. So ikat is universally understood from east to west but is still very rooted in India. The designs of the polka, houndstooth or the Uzbek motifs are universally understood and for a label that seeks to address an international audience eventually, this was a great starting point. I did not want to do things like ikat-inspired printing because, while I respect the ones who do that, I felt it necessary to stay true to the craft and do ikat by hand and not compromise on the labour-intensive aspect of it. 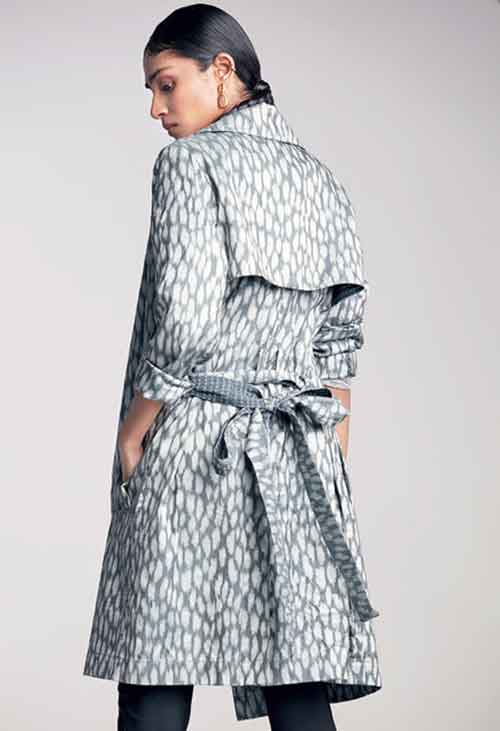 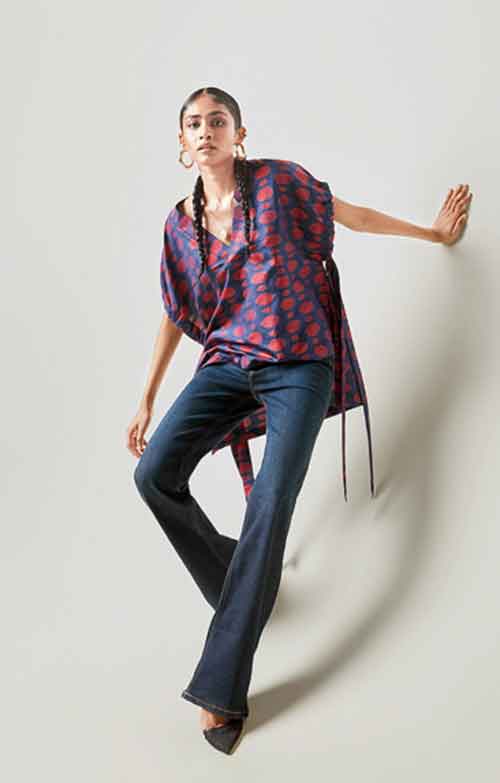 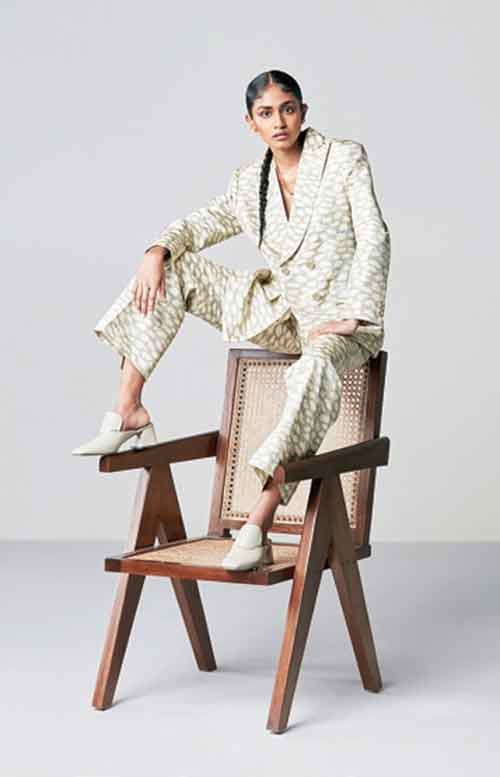 Textile, texture, craft and tailoring — how do you balance the four?

One of the most important aspects of textile design is actually a very neglected subject in India. What happens in India is that most people tend to look at a particular finished product that comes in from any weaving cluster and they would use it as is without altering the construction of the fabric for end-use. I engineer the fabric according to the end-use, which is the other way around. That then gives us so many more options.

As a textile designer, my skill set is to know how to engineer the fabric according to the design I have in mind — whether I want something structured or I want something to flow in a certain way. This requires an understanding of the techniques involved in making and weaving those fabrics. As a textile designer, I have that privilege of doing it and have exploited it for this collection. Of course the art of constructing a garment can be extremely important and can’t be underplayed because ultimately, the wearer has to feel comfortable in wearing a garment and it draws a certain aesthetic quality from how it is cut and stitched. That is something we give a lot of importance to. In fact, we had done several iterations of many of these garments, just to get it right. So we did a lot of research into it and it is very important for the whole exercise to be thought through in the studio. That is a benefit that I have because I can think of it from end to end — from yarn to the product — as there is no aspect of the design that isn’t done in-house here.

How do you envisage the future of fashion in India?

As a culture and society, India has always been sustainable and that is not something that is confined to only our textiles but is applicable across the board. Somehow, sadly, we lost some of those practices but the time has come now to reclaim them. If we continue to embrace what is ours, we will continue to be in a good place. Today there is a lot of emphasis on the movement of buying local that has emerged due to the pandemic and I hope that this will not be confined to only this period but will continue in the future too. Of course there is some short-term pain for all of us, which is undeniable when something of this magnitude hits us but it is because of this that many of us in the industry have had to revisit our processes and practices and I think, we have come out stronger. My optimistic view is that consumption in India will rise post this period.