Vikas Khanna on his quest to #FeedIndia

‘People at The Golden Temple, my grandmother and the entire nation did not train me to sit at home and take selfies’ 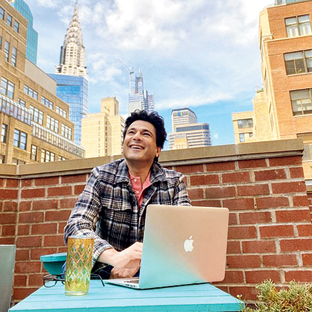 I gave up on April 11 — we had promised people that ration was on its way but due to many variables involved, we could not keep that promise… I called Ma to inform her about this… she said that for almost 50 years, people at the Golden Temple, my grandmother and the entire nation did not train me to sit at home and take selfies. ‘Stand up for the nation, it’s your duty,’ she told me. And that changed the entire campaign” — recounted 48-year-old Amritsar-bred, Michelin-starred chef Vikas Khanna from Manhattan, even as his robust relief work just reached the landmark of having provided 10 million meals (dry rations and cooked food) to the needy in India across over 125 cities in two months, as of today.

It all began in April, soon after the first phase of our nationwide lockdown had just started regurgitating heartbreaking stories of starvation about the impoverished, as they fell prey to the government’s lack of efficacy. Sitting in Manhattan, the celebrity chef could not stomach it and he put out his #FeedIndia plan on Twitter and asked for help — both with on-ground leads about who needs help and volunteers for getting that help to them. “I think in the first week of April, when the emails for ration requests started pouring in, we realised that supplying food is going to be a huge challenge. By then, we were already thinking of massive operations around India. But the planning and executions were a challenge due to the lockdown and there were severe issues with transportation. It all became smooth once NDRF (National Disaster Relief Force) came on board and helped us manage the logistics,” said Vikas. 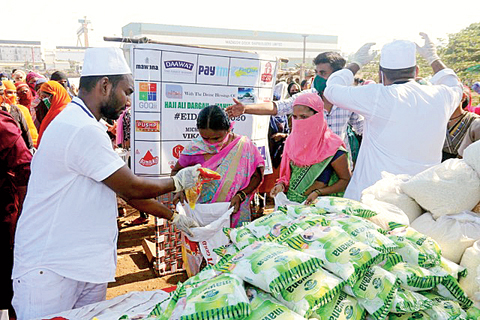 In a world strung together by technology, the culinary star made the best of it by collaborating with many to turn his efforts into a countrywide one. His efforts now range from macro to micro campaigns, covering as many as he could — from orphanages, old-age homes, leprosy centres, migrants on foot to transgender communities, the differently abled, sex workers and AIDS patients. “From finding the need in an orphanage to leprosy centres to old-age homes — all requirements were requested by the use of social media. Finding vendors or wholesale suppliers was also resolved through assistance via social media. Many times, I also asked for transportations and made delivery requests too. The entire initiative has been running on social media,” explained Vikas, who sometimes even received up to 800 emails, “with the majority of the people writing to help”.

After his Id campaign where he ensured over 2,00,000 meals in Mumbai, his latest campaign, Barkat (named after his grandmother’s favourite word) that started out to feed 1 million in the Delhi-NCR region had translated into over 2 million meals. Vikas has even reached out to the Shramik Express trains, helped set up food stations at petrol pumps along highways to address the need amongst the migrants in transit and has also managed to help with essentials such as sanitary napkins and slippers.

And amid this massive relief campaign, Vikas has also found the time to respond to almost everything on Twitter, post about his latest kitchen happenings (such as extracting flavours from a lotus) and also surprise real-life heroes, like the story of 75-year-old Satyam, a cook at the Maruthi Tiffin Canteen in Palakollu, Andhra Pradesh that he told me. “Chef Satyam has been an amazing help for perfecting the famous Dibba Rotti (a popular local snack) — I learnt about it through his video and was forever grateful for it. When we found him to surprise him, he said that he thought everyone had forgotten him!”

Micromanaging relief work for the second-most populous nation in the world sitting in New York City cannot possibly be easy for anyone. “My entire day is spent on worksheets, and planning and execution. Phones are ringing 24x7 and I am working on computers, making round-the-clock negotiations for rations and more. As the major deliveries happened in the late afternoon (Indian time), it would be around 3am for me. But it also had a benefit — when India would sleep, I would get six-seven hours of intense planning and reading emails, which was our primary source of info,” said Vikas.

For someone who has been on the fore of the F&B industry globally, being a restaurateur, having cookbooks, cooking shows, celebrity associations, an Oscar-eligible film and the likes of Barack Obama, Pope Francis and Queen Elizabeth II on his list of people he has cooked for, I daresay that a coronavirus-hit world is also trying times, personally. “Every day is a challenge — after losing friends, acquaintances and family, it’s been hard,” admits Vikas. But he is also optimistic as he predicts that his industry will jump back: “Right now, all our businesses are shut. But I’m very optimistic about the new shift in the world. We are a part of people’s daily rituals and we will find a way back into their hearts — of course with new rules and parameters.”