Sanjeev Kapoor on ‘Verbalisation of Visualisation’

We spoke to the ever-smiling chef about his life in the new normal, his new learnings and brand of audio entertainment 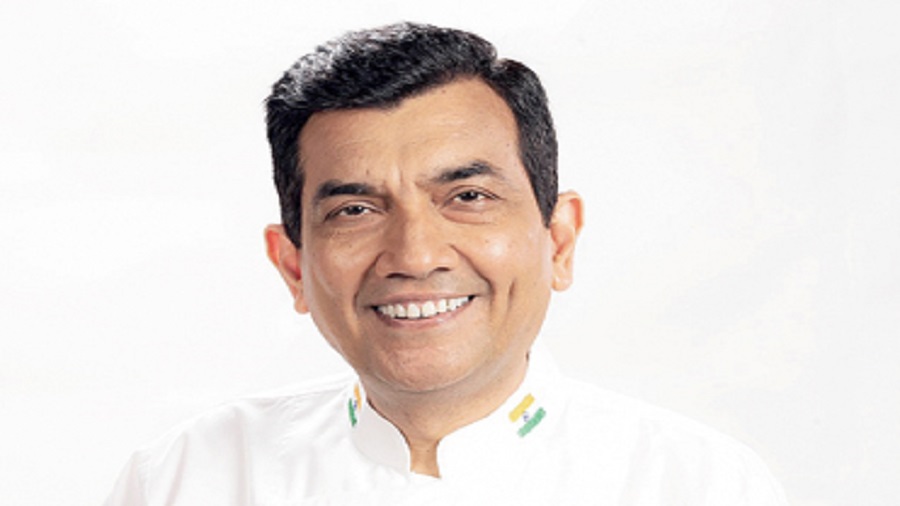 A star chef and an entrepreneur with a vast business empire, Sanjeev Kapoor is in no mood to stop growing and strengthening his brand any time soon. Always striving to stay relevant, 56-year-old Kapoor has taken a dive into the world of audio shows with Audible’s India-only app,  Audible Suno. The free streaming service from Amazon features two of Kapoor’s shows — Simple Recipes with Sanjeev Kapoor and Sanjeev Kapoor Ke Khazane. While in the former, he talks about easy-to-make, desi recipes, the latter is where Kapoor talks about everything from mindful eating to healthy diets.
The Telegraph spoke to the ever-smiling chef about his life in the new normal, his new learnings and brand of audio entertainment.

In your decades-long career, you have tried to juggle various mediums — from television to social media and radio. What made you step into the new world of audio entertainment with Audible Suno?

It was around three to four years back, I was in Los Angeles... I was travelling in a car and noticed that the driver of the car was always speaking to the phone instead of typing. That made me think and I realised that audio as a medium has a certain power. And as a medium, there was nothing I was doing in audio. I was on newspapers, magazines, Facebook, YouTube, television but not audio. Soon, I started a radio show, which I still do every Sunday and it reaches people in 35 cities. Within two weeks it became the second-most heard show on radio across channels. It was something new to me. Then I came across Amazon Alexa and started working on recipes for them. If you ask for a recipe to Alexa, you will get my recipes and you don’t need to ask specifically for ‘recipes by Sanjeev Kapoor’. Post that, we started working on content for Audible Suno. And by this time we had enough content on how audio and food works. This was in the beginning of last year. That’s how it started.

Do you think consumption for this kind of content has gone up, especially in recent times?

If there’s one good thing that has come out of all that is happening is that home cooking has increased manifold. This is very healthy and I have been saying this for years. Even fast food cooked at home is healthier because at home you will always find ways to make it healthy.

That’s also how you reached every household in India in the initial days of your career, by showing people how to cook…

I have stayed true to it because this is what I believe in and this is what I stand for. Food is meant to be eaten local because it’s suited to grow in that area. It only makes sense. I think that the forms may change but the essence will be the same.The ingredients will get more traditional and more respect.

You make talking seem easy but is there any preparation that goes in it?

Each medium had its own nuances. There are few things that I learnt from radio… I realised that the throw of voice in audio medium is important, whereas on TV, you can be subdued. Command over language and thinking ability are a given. But how do you bring that smile and build that trust are something that I have learnt and refined. Even for TV, I worked for it. First few shows were embarrassing for me… they were so bad! Even now, I don’t watch my shows because I am much better in live shows when there are people. I never stop while cooking and finish the dish that I start making. Even with Audible, it’s an extension of that. And there’s preparation of a lifetime.

What according to you are the differences in doing a show on television vs on an audio-only medium?

In TV, the biggest thing is that when you look into the camera, you are looking into the eyes of the person who’s watching it. But when you speak into the mic, you aren’t speaking into the ears of the person. Audio medium has a lot of distraction and it’s more difficult when it comes to food. You can’t see it! So, you have to catch the attention of the listeners very fast. You have to say it fast, keep it interesting and make a conversation. You have to create that visualisation of food through your words. I don’t work with a script even for radio. I was always into debates and elocution since childhood. There’s a full method in this madness and it didn’t just happen by chance. I was the first one to get a trophy in college for three consecutive years for best speaker.

Also, the throw of voice is so important. When I do my shows on Audible Suno, I don’t sit while talking. These things are especially critical in an audio-only medium. I have also tried cooking while doing these shows because when you’re actually cooking there are these ambient sounds. I think I want to do this more in the future because it’s more like storytelling.

The last couple of months have been a period of uncertainty with the F&B industry being one of the worst hit. How different has it been for you?

It has been rough. In the first month, I felt that it will pass. But by April 15, things started looking grim. From then to May 25 was the toughest period as we couldn’t see any hope, zero income, no ads. Post May 28, when things started to open up a little, is when we started to see hope and by then we started to see a lot of movement in digital media. Fortunately since then, the only way has been up. Now when I look back, the period of uncertainty wasn’t exactly a great phase, to be honest but some of the things are actually better than before.

Has this whole time given you a different perspective on things then?

There has been a whole acceleration in the digital space. We have always understood the power of digital and have never downplayed it. We don’t know where it is all going but there is a clear sign that few consumption patterns will change. While things will go back to normal, ‘normal’ won’t be the same any more. Eating out will increase because you don’t have to “go out” any more. So, you will eat out more frequently. You have to be agile to accept the changes.

There are so many things beyond food… I am doing something with a pharma company, education… For me, it can be anything that I haven’t done before. I just believe in who I am and I am somebody who works a lot! My excitement is in learning and knowing.

I have been doing a lot of work on gluten-free options because India has a lot of unknown cases of coeliac disease. So that involves cooking with a lot of different kinds of millets. In our quest for refining everything, we started losing on all the goodness. For example, sorghum, which in Hindi translates to ‘chaara’, is something we feed the animals. Why should people have only one kind when there are so many different kinds of millets?

What according to you are going to be the changes in the F&B industry in the coming days?

Things would remain grey for the next 12 to 18 months. There would be a lot of confusion in the minds of people who are in this industry. New people who will come in will explore this industry in a much bigger and better way. The biggest player of yesterday wouldn’t be the big player of tomorrow.

Prevention is much better than cure and all the goodness that your body needs is in your kitchen. Just start implementing the knowledge that you have or things you have always known. You can’t stop eating Indian food because there are so many good spices that are great for health. You just have to make those right choices.