Waltz of the Flower

As one of a handful of Baghdadi Jews living in Calcutta and perhaps the oldest of the lot, her story is not her story alone 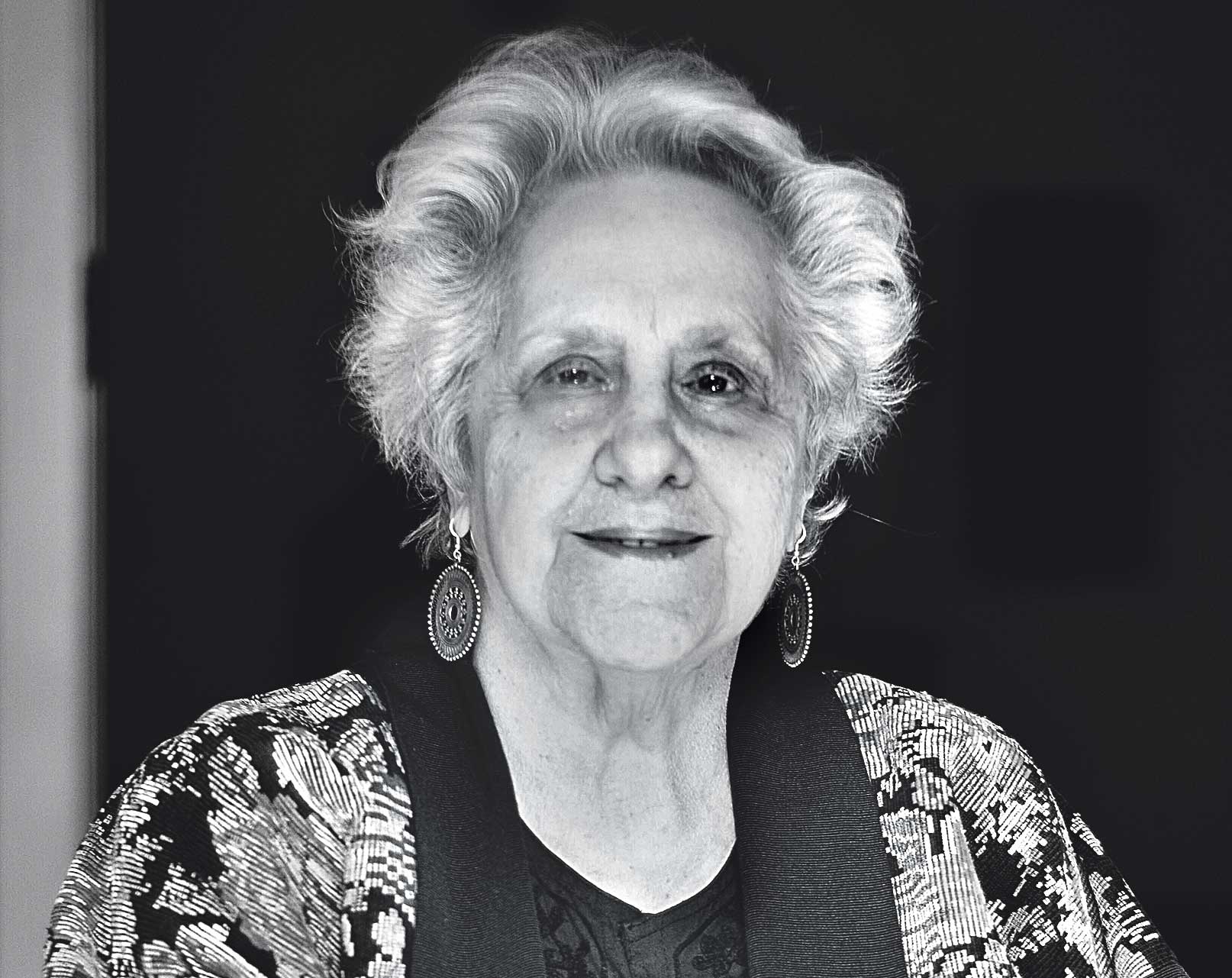 She is called Flower but there is nothing seemingly fragile about the 90-year-old woman. She is tall with broad shoulders. Her skin is smooth and barely lined. “I have seen a lot of history — 70 years of that century and 20 years of this,” smiles Flower Silliman, one of the 30 Baghdadi Jews still living in Calcutta.

We are at Flower’s residence on Moira Street and though it is just her and me in the room, the many Frida Kahlo portraits on the walls, on the sideboard, form our greater audience. She is in an easy chair, resplendent in a green floral nightgown. The sun is peeping through the netted windows of her living room and lighting up the red-oxide floor. Her green-gold eyes twinkle with memories and she adds in clipped English, “I have five children, 13 grandchildren and 12 great-grandchildren.”

Flower’s parents were born in Calcutta; it was her grandparents — both sets — who came from different parts of Iraq.

The paternal grandparents arrived in Calcutta from Basra. Her grandfather, a petty trader, would bring fezzes — short cylindrical peakless caps, sometimes with a tassel attached — from Baghdad and sell them all over the Far East and return home with spices. Says Flower, “All Muslims would wear fez caps then. In India, my grandfather would stop in Bombay and Calcutta. Otherwise he went to Penang, Jakarta, Singapore.”

Flower’s grandfather got married when he was 50. Flower dwells awhile on his fabled good looks — six-foot tall, blue eyes and so on — but it is his 16-year-old wife, Flower’s grandmother, who seems to have made a more enduring impression on her. In fact, Flower refracts her own story and the story of her entire family as it were, through the personas of her two grandmothers. The descriptions, the attention to detail, the emotions attached are so overwhelming that by the time the interview is over and I have taken my leave of her, I realise that I don’t even know the names of the two grandfathers.

Flower says, “My grandmother’s name was Farah. Farah is joy in Arabic. My name is Farah too. But I was born in the heydays of the Raj, which is why everything had to be anglicised. I became Flower. My two brothers had Arabic names but they were called Charles and Eric.”

Flower cannot stop talking about Farah. Farah lived a colourful life. Farah travelled to the Far East. In the Far East, Farah moved from one Jewish home to another with her husband. Farah had a beautiful Chinese shawl embroidered with red roses. Farah and her husband smoked the hookah. Flower is so into the Farah-tales that it would be rude to turn focus back on her own life. Says Flower, “My father was born in Singapore in 1899 and my aunt in Penang. This is all in a diary and I have it with me. It is written in Hebrew...”

As the story goes, Farah and her husband decided to settle down once the children reached school-going age and the city of their choice was Calcutta, where Baghdadi Jews were very many in number and mostly into indigo or opium trade.

Flower’s maternal side had their roots in Al Uzair. On that side of her family, until a couple of generations ago, most of the men were trained to be mohels, or priests. “Mohels are people who perform circumcision and other special religious duties. They were trained and sent out to places where the clergy was needed to read the prayers or maintain the synagogues,” says Flower.

Her maternal grandmother’s name is Simha. Most of Simha’s brothers went to Shanghai and one of them went to Poona [now Pune] to work as a steward in the home of Jewish businesswoman, scholar and philanthropist, Flora Sassoon. When Flora fell ill and someone was needed to nurse her, Simha was asked over. Says Flower, “When she died, she left some money for Simha to get married and that is how she and her brother arrived in Calcutta, where she got married soon after.”

Flower recollects how Simha would sew clothes and women’s garments. She says, “My mother experienced poverty. But Jews never had to beg. We looked after our poor.” The Jewish Girls’ School in Calcutta was set up by the Jews and everything from education to clothes to food was provided free of cost. Flower’s mother, Miriam Shooker, was among the first batch of students and she eventually went on to become a nursery school teacher.

In the early 20th century, there were around 5,000 Jews in the city. Everyone lived in close proximity to each other with the majority settled near Maghen David Synagogue in Burrabazar. The Jewish para extended to Bentinck Street, Grants Lane, Bowbazar, Phears Lane, Chaatawali Galli, Marquis Street, Kyd Street, Sudder Street and Middleton Row.

Everyone in the community knew each other, and frequented the same synagogues and clubs. The Judean Club in central Calcutta was a world unto itself. In her time, Flower and her friends would play badminton and housie here, dance and listen to music. Flower mixes her reminiscing with footnotes — Yom Kippur is the day of atonement; Hanukkah is the festival of lights, much like Diwali; traditionally Jews never mix meat and milk; Bar Mitzvah is like the thread ceremony and so on and so forth.

Flower’s parents, Miriam and Elias Abraham, married in 1920. Elias worked at the Calcutta port as a measurer of jute and gunny. Flower was born on April 20, 1930, at the Eden hospital — now part of the Calcutta Medical College. She says, “It was a British hospital and in those days it was the hospital of choice for Jews, Christians and Anglo-Indians.” By that time, both her grandfathers had passed away.

And then World War II broke out. Says Flower, “Jewish refugees came into our lives because they were relatives of someone or the other. When the Japanese entered Burma [now Myanmar], the Jews there had to leave. Some came here by ship. Some trekked via Chittagong and Assam to Calcutta. And many of them died on the way. A lot of these displaced people came to live with us. They had nothing. They slept on the sofas, on the floors, and they remained with us till they got a job.”

Flower looks out of the window, possibly remembering what her nine-year-old self had witnessed. As the Japanese came closer, they bombed the docks and Kidderpore. There was no casualty but it did scare the life out of people. Flower, along with her brother and mother, was sent away. The little girl found herself in Delhi for a few months, far from the comforts of home and fond things such as baklavas and Turkish Delights and cheese samosas.

At 13, Flower was sent away again — this time as a boarder to a school in Nagpur. This was where she first got a taste of a non-Jewish environment. She says, “From having only Jewish friends, now I had no Jewish friends, only Anglo-Indian and Christian ones. I was the only Jewish girl. I started to eat non-kosher food. I started going to church with my Christian friends.”

Her next stop was Delhi, where she joined Lady Irwin College — the director, Hannah Sen, was a Jew from Calcutta. Almost everyone around her now was a Hindu or a Muslim. Soon Flower found herself celebrating Guru Nanak Jayanti, Holi, Diwali. She says, “It felt like I had lived in a cocoon and now suddenly I was a butterfly. I loved Frank Sinatra and I had taken records with me. I told my friend Sheila to play them. She made a deal with me. If I listened to Pankaj Mullick, she would listen to Sinatra.”

After graduation, Flower returned to Calcutta and started teaching at St. Thomas’ School, Kidderpore. At 21, she married a Jewish man whom she had met at the Judean Club. He came from a family of foreign exchange brokers and was also the direct descendant of Shalom Aharon Obadiah Cohen — the first recorded Jewish immigrant who arrived in Calcutta in 1798. Says Flower, “Calcutta had changed completely. Suddenly the streets were full of people in khaki. We had never seen planes before and now there were planes on Red Road. Calcutta was a big war base. In 1939, the British army arrived and by 1942, there were American soldiers too. Many of them came to our houses for festivals and Friday night dinners. They got to know the families and started dating their daughters. Many fell in love with these soldiers — some of whom were Jews — and once the war was over most left. The exodus started.”

And then came a time when entire families started migrating. In May 1948, Israel was officially declared an independent state and many Jews shifted from Bombay and Calcutta. The Israeli government even airlifted people. In the meantime, a newly independent India was rife with a variety of rumours. Flower says, “There were rumours that Hindi would become the national language, everything would become Indianised. Jews felt they would not do so well in an independent India and were frightened. Jewish business firms such as the National Tobacco Company and the jute mills at Agarpara were sold out. People left. By 1955, we lost half the Jewish community.”

Flower too left the city but later, in 1975. She moved to Israel, where she set up a restaurant of kosher Indian food which she called The Maharaja. “Every evening, I would wear a sari and go to the restaurant. People would call me Maharani,” she recalls with a laugh. She eventually moved to the US for a couple of years before returning to India for good in 2008.

Mid-conversation, one of Flower’s neighbours enters the room. Flower asks her to check her computer’s Internet connection. The neighbour, a Mrs Ghosh, corrects Flower. She says, “It is not a computer, it is an iPad.” The nonagenarian replies, “Everything these days is a computer; even your phone is a computer. One of these days, we will be asked to swallow a tablet and we will all be computerised.”

And I thought to myself — not you, Flower. Never you.

A slice of Jewish Calcutta