‘The UP of my childhood was Holi and Eid together’

Almost a year after her arrest during the anti-CAA protests in Lucknow, activist-actor Sadaf Jafar chats with Upala Sen 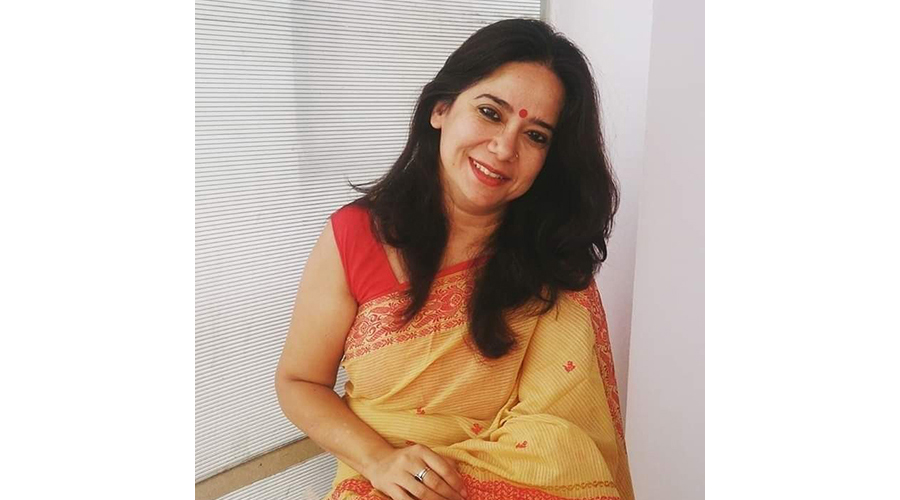 The pandemic and the lockdown have altered all sense of time. With routine punctuations either on hold or virus-adapted, the days bleed into each other like an amateur’s watercolours. It is difficult to tell if something happened a week ago or several months. At one’s accurate best, one can say what was Before Corona and what is After Corona.

It seems to me I first heard of Sadaf Jafar only yesterday. Reports of police brutality at a Citizenship Amendment Act (CAA) protest in Lucknow and Hollywood director Mira Nair tweeting about one of her own from the cast of the Web series, A Suitable Boy, “beaten and jailed”. “Join me in demanding her release,” Nair had urged. There were visuals of Priyanka Gandhi Vadra with a girl and a boy — Sadaf’s children. What followed thereafter were news reports of a litany of charges slapped against the 44-year-old. Charges of rioting, of rioting with a deadly weapon, of assaulting a public servant, of attempt to murder, of being party to a criminal conspiracy...

Turns out all that happened in December 2019, and here we are a month away from another December. And someone said, “Did you know that Bibbo, major-domo to Tabu’s Saeeda Bai in Nair’s new release, she is that Sadaf Jafar. Part-actress, full-blown street activist.”

The week of this interview Sadaf is not in her home state of Uttar Pradesh. The Congress party worker and spokesperson — she joined the party in 2018 — is in north Bihar’s Darbhanga district. She is campaigning for the Congress candidate from Jale Vidhan Sabha constituency, AMU alumnus Maskoor Usmani; he’d eventually lose.

The telephone interview is happening rather late in the night but Sadaf has to raise her voice to be heard above the surrounding din. Her cheery “hello” sounds like a “good morning” that got away. She proffers, “I am with other party members, working out details for tomorrow’s travels and stops. It is a longish trip; from here I will go to Kishanganj and then to Katihar... we are not going to sleep in a hurry.”

This is immediately after the first phase of polls. RJD’s Tejashwi Yadav is man of the hour for steering the poll narrative from caste to jobs. He is the face of the Mahagathbandhan in which the Congress is a stakeholder. Even off a poor connection, one gets a whiff of the energy on the ground, the line crackles with optimism; Sadaf is campaigning for the first time after Amethi. She starts narrating some conversations with the locals, “Yes, yes, the treatment of migrants is an issue, etc.”

But the mind has a mind of its own; questions about last December drown out the animated energetic narrative. I am thinking of her interviews post her release from jail in the first week of January. I remember the oft-repeated bit about her being kicked in the belly by a police officer, others in khaki had allegedly taunted her with a “Go back to Pakistan”.

My volley of thoughts scrambles the sound waves. Splutter. Screech. Graze. When the line goes quiet again, I ask Sadaf how far Jale is from Hazratganj jail this day.

Masks and sanitising routines have inserted themselves between people and politics indelibly now, but last December, India was fighting quite another bogey. On December 11, Parliament cleared the Citizenship (Amendment) Bill. Assam burned; there was violence in West Bengal; protests in Delhi, Patna, Hyderabad, Bangalore. Prime Minister Narendra Modi took to Twitter to urge Indians “to maintain peace”. The BJP-ruled states handled the protests with a heavy-handedness that attracted international criticism. The spokesperson of the United Nations secretary general Antonio Guterres said, “We are concerned about the violence and alleged use of excessive force by security forces...”

Sadaf was present at one such protest at Lucknow’s Parivartan Chowk. The story goes that all of a sudden things took a violent turn. Sadaf was recording and streaming the events real-time on social media when she was plucked out of the crowd by police. She says, “What followed was something I had not pre-empted. Instead of being detained and sent home from the thana, the police started to beat us up. An old man soiled his pants, a young man who was singing Gandhi’s bhajans till a minute ago now had blood dripping from his beard.”

According to Sadaf, the whole incident was suffused with hate. She keeps saying, “They were full of hatred. They were doing it willfully. They were not doing it because Adityanath wanted them to do it. They kept saying, ‘Aap Yogiji aur Modiji ke khilaaf kaise ja sakte hain?’ Yogi was not standing there telling them to kick me or pull my hair or scratch my face. ‘Tum kya janti ho CAA ke baare mein,’ they barked. They were blinded with anger.”

It was later known that more than 1,100 people had been arrested across UP in connection with these protests then, another 5,558 were kept in preventive detention, more than 20 died. Sadaf continues, “It was not as if they were beating up only Muslims. [Theatre artiste] Deepak Kabir got beaten up, [academic and social worker] Pawan Rao Ambedkar got beaten up. I earned brownie points for having a Muslim name. ‘You are having fun and begetting children,’ they said. ‘Khaati yahan ki ho, bajaati wahan ki ho,’ they shouted.”

The idea of protest in UP has changed irrevocably, believes Sadaf. She says, “We are practically living in a police state.”

And how is all or any of this different from the UP of her childhood? She replies without a pause, “That UP was like Janmashtami. It was like performing at Teej. It was Holi Milan and Eid Milan being celebrated together. When Babri Masjid was brought down, we had just arrived in Lucknow from Ahmedabad, neighbours asked us to change the nameplate but my father refused. This time, the police and the administration put my name on hoardings, almost trying to throw me and others before mob-lynchers.”

I ask if she has put all that behind her. Sadaf replies, “You know in the mahila jail they would shut the cell gate with a loud deliberate clang. That sound was a reminder that I was a qaidi. Even now when a door shuts noisily, I hear that clang. I am not scared. I am not scarred. I am out now, but I carry that sound within me.”

It is not difficult to see how Sadaf’s long stint as a schoolteacher — she taught political science and history — her dalliance with the stage and her activism are all feeding into her new role of a mainstream politician. She has an unfazed and a frank air about her. For instance, in her television interviews and speeches, and even in the course of our talk, she brings up the fact that she is a single mother and a survivor of domestic abuse. Is this her way of foregrounding an “ism”? Or is this a studied political stance to pull a certain votebank towards her? Perhaps and perhaps.

She adds, “When someone asked me why I am not scared of Adityanath, I said, ‘Ghar ki aag jo jhelte hain na, uske baad Adityanath bahut mamooli lagta hai’.” Meaning, for one who has experienced and survived domestic abuse, an Adityanath is but a very minor menace. When she says this, Sadaf’s tone is even. And that’s the other thing about her, she speaks without venom, without seeming to want to annihilate anyone and everyone who is not on her side. Even if it were an act, it is a refreshing act.

Sometimes the brightness of her optimism is difficult to accept. The talk of feeling compassionate at the end of her jail time; the promise that the “beautiful social fabric” of UP will regenerate and be whole again. She does not believe she lives in a Hindu Rashtra.

She does not begin to lay bare her heart and emblazoned allegiances like certain others, but she does heap praise on Rahul Gandhi and Priyanka Gandhi Vadra. His vision, her compassion. She makes it clear that she is in the Congress because she is very convinced about Rahul Gandhi’s brand of politics.

Do people not ask her why the Congress? Apparently they do. And her answer is? She says, “I have taught the Constitution for almost 15 years of my life. And the only party I see that tries very hard to uphold the Constitution is the Congress.” And then as if hearing the sound of her own words, adds, “Of course, I will not say it is a perfect party. I am not a bhakt, I am a critic of my party. But this is my house and we will together fix our house and yes, we will fight the demons outside.”

But is she not impatient for change? Is she not impatient with the pace of her party’s counter to the BJP? Sadaf replies, “We are willing to wait for the people to realise that they are being ruled by communal forces that are dividing the country and undermining the Constitution. We are willing to highlight the point but we shall never resort to similar things to come to power.”

Wrapping up I ask her about A Suitable Boy and her role in it and she dissolves into laughter. It seems one of Sadaf’s students coaxed her into auditioning for a bit role. “But Mira saw me and she thought I was suitable for the role of Bibbo,” she says, and before dissolving into more effervescence, adds, “She thought I was a suitable girl”.