Advertisement
Home / Culture / Our once and future homes
Big Story

Our once and future homes 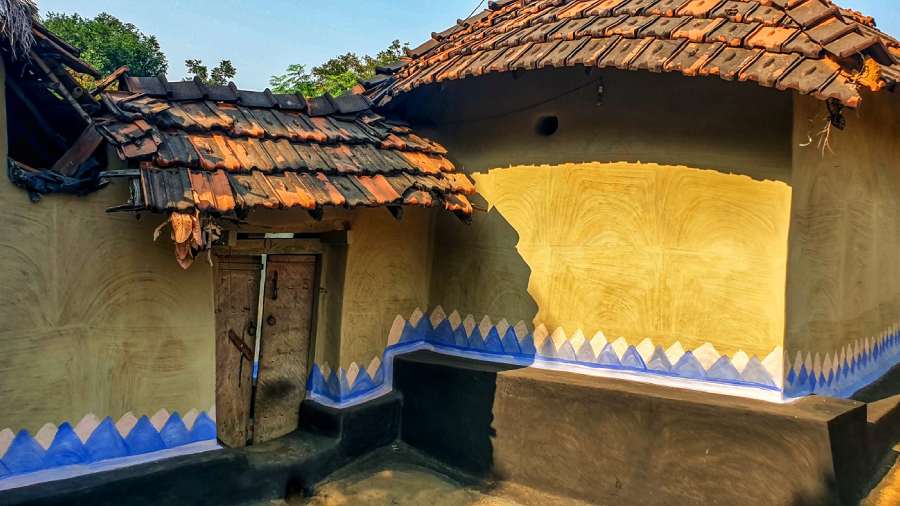 The two-storey mud house with an overarching straw thatch and tin-shaded verandah on the ground floor is an oddity in east Burdwan’s Buinchi, a village near Katwa. It is the only kuchcha house in the area.

The house belongs to the family of Swapan Kumar Thakur, 56; it was built at least 25 years before he was born. Thakur remembers how the locals referred to it as goaal kotha after the spacious cowshed on the ground floor. Thakur has vivid childhood memories of the walled courtyard, the basil plant in the eastern corner, the cylindrical granary… He talks about how the hipped char chala structure — chal here means roof — had thwarted the sun, heat, torrential rain and cyclonic storms for nearly a century. The raised earthen plinth had apparently saved the house from the devastating 1978 flood that had devoured most mud structures in the area.

Not long after, Thakur’s two younger brothers, who co-own the house, urged him to do away with the mud structure. They wanted to replace the “vernacular architecture” with a “proper” house of reinforced cement and concrete, just like the rest of the village folk. But Thakur, a researcher of folk history and culture, emotionally attached to the old seat of his ancestors, resisted the idea.

He would rather rebuild the house with all the elements of a classic Bengal mud house, including the char chala, made of the thick straw of the autumnal paddy or aman dhan.

The reconstruction turned out to be a nightmare. As Thakur discovered, good quality straw is not easily available in the age of the combine harvester that reaps, threshes, gathers and winnows paddy at one go. The versatile machine turns straw into stubble and refuse, set on fire by farmers routinely after every harvest.

He couldn’t find skilled craftsmen either — the chal baruis who craft the roofs of mud houses on frames of bamboo placed on beams made of trunks of robust palm trees.

Thakur’s field research has made him a keen explorer of the Rarh region that lies between Chhotanagpur and the Hooghly river. In time, he discovered the type of craftsmen he was looking for and the ideal thatch in far-away Guskara, near Bolpur.

“There are very few places in Bengal where you can still see traditional mud huts,” says Thakur. He talks about Damankiari, a tribal village in Purulia. “Villagers here still prefer mud houses to concrete boxes that simmer in summer months,” he says.

In any case, the hunt for craftsmen inspired the folk historian to explore what remains of Bengal’s vernacular architecture and also find out more about its present-day practitioners across the state and beyond. Nearly three decades of Thakur’s field research has now come together as a book — Matir Bari: Sthapatya o Sanskriti or Mud House: Architecture and Culture.

“The architecture of typical curved straw or reed roofs of a farmer’s hut in Bengal inspired the construction of countless terracotta temples of eastern India, chhatris of Mughal and Rajput monuments and, eventually, British colonial bungalows,” says Thakur.

The British adopted the chalas to survive the tropical climate...'Bungalow' is derived from bangla - of or belonging to Bengal

The hot and humid climate of the region was the primary focus of local architecture based on chalas that evolved from a single roof (ek-chala) to eight roofs (aat-chala). The multiple roof structure was adopted for community halls (chandi mandap for Hindus and daleej khana for Muslims) and terracotta temples. Later, independent Islamic rulers of Bengal used the concept to build mosques and monuments. “Mughal emperor Akbar, fascinated by aat-chalas, summoned artisans from Bengal to build the chhatris or canopies of Fatehpur Sikri. Aat-chalas were adopted in Rajasthani architecture too,” says Asok K. Das, an art historian and a museologist. “The British adopted the chalas in bungalows to survive the tropical climate, but they added an extended verandah to build airy workstations during hot summer days,” he adds. The word bungalow, Thakur points out, is derived from bangla, meaning, of or belonging to Bengal.

The earliest remains of Bengal huts are to be found at Pandu Rajar Dhibi or the mound of King Pandu, a tourist spot not very far from Thakur’s village in east Burdwan. The proto-historic site has ruins of cottages — either squarish or round-shaped — with walls of bamboo frames plastered with mud and flooring made of pellets of laterite soil. That was nearly 4,000 years ago.

Many Adivasis still build their huts in the old fashion. Silos to store paddy in rural Bengal follow the same old style of architecture.

Amid the ruins of the 2,500-year old Chandraketugarh, 40 kilometres northeast of Calcutta, there is the mound of Khana and Mihir. Khana, believed to be the daughter-in-law of mathematician-astronomer Varahamihira, is famous for her oracular advice. One such nugget meant for peasants has to do about where to build a house. It goes thus: Pond in the east, Bamboo grove in the West/Shut the North, But open the South. The tip aims to integrate the architecture of the house with nature as well as the local climate of lower Bengal. Thakur explains, “A pond in the east keeps a rein on the summer heat, while a bamboo grove in the west protects the house from storms and Nor’westers. No doors or windows in the north safeguards from the chill of the north wind and if the south remains open, you will invite a soothing breeze on summer evenings.”

Arunendu Banerjee is a consulting engineer and environmental designer who has been working with rural artisans for decades, especially in and around Santiniketan. He says, “Traditional mud houses are fine specimens of creativity of the rural folk. I have learnt a lot from the way they design the thatch, the floor or the walls based on ecological wisdom.” He cites Santiniketan’s Natun Bari, Rabindranath Tagore’s three-room thatched cottage created in 1902, among other beautiful mud houses in the area.

While working with artisans, he learnt many tricks of the trade. He learnt about uluti, or reinforcements of mud walls with dried bits of ulu grass. Likewise, Thakur mentions kharoti, the art of stucco or moulding straw into architectural decoration of walls, still practised by artisans in Burdwan and Murshidabad.

The traditional baruis or gharamis no longer build mud houses as their next generation would rather work as farm hands or pull e-rickshaws. But both Thakur and Banerjee believe traditional mud structures will survive.

Thakur brings up Damankiari again. Apparently, all buildings in the village, including the sub-post office, are mud structures. If they don’t get straw for thatch, they use locally baked tiles. The walls of all the mud houses are like expansive canvases, painted with geometric patterns in typical Adivasi style…

Damankiari — the watchword for a lost way of living.

Belong where we do