Along the eastern fringe of the city, you will see the ponds, channels and lakes at a distance 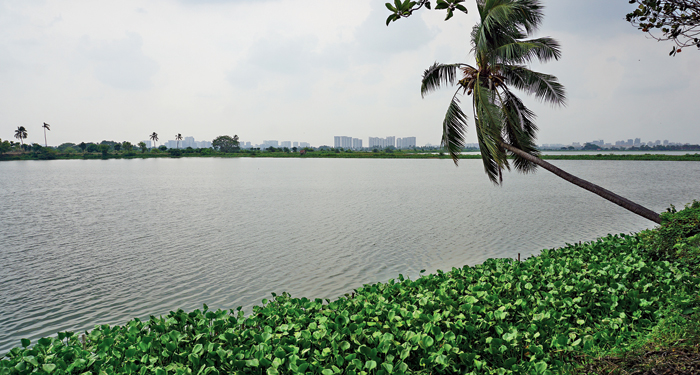 If you take a flight from someplace to Calcutta and land on a clear afternoon, a vast expanse of emerald waterbodies will reveal itself unto you on the eastern side, just beside rows of gleaming tower blocks. As the plane swoops down and is about to lean into the runway, the emerald separates. It turns out to be a patchwork of flooded fields, separated by green embankments and dotted with coconut and palm trees. Once you have landed, should you happen to drive along the eastern fringe of the city, you will see the ponds, channels and lakes at a distance. If you enquire after them you will be told, “Those are bheris.”

And that is all.

Bheri is the Bengali word for shallow fish ponds. The term, however, is used loosely to connote wetlands that include the waterbodies — even those that are not used to cultivate fish — as well the contiguous land. This particular belt is known as the East Calcutta Wetlands. Though the bheris of Calcutta are located only a few miles from the heart of the city and the wetlands cover about 12,500 hectares, most Calcuttans know very little about life in and around the bheris or the folks who live by them. 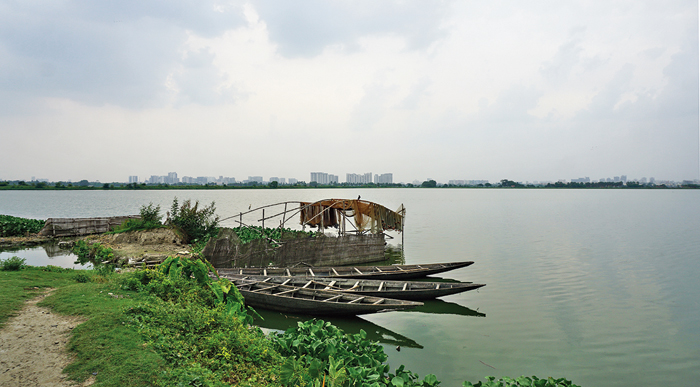 Legend has it that in the early decades of the 20th century, a bheri owner by the name of Bibhuti Bhusan Sircar noticed that wastewater acts as nutrient for fish and doubled the yield of his fish.
Prasun Chaudhuri

I set out one morning with Sasidulal Ghosh and Partha Pratim Chakrabarti to get a closer look at the bheris. Ghosh is a pisciculture expert and runs two bheris. Chakrabarti is principal scientist at the Central Institute of Freshwater Aquaculture, in Kalyani, where he is an expert in sewage-fed aquaculture. That day we take a dirt road off Salt Lake Sector V, the IT hub of the city.

Calcutta is located between River Hooghly to the west and estuarine rivers Kultigong and Bidyadhari to the east, with a natural gradient or slope towards the east. The wetlands were originally inter-distributary saltwater marshes of these rivers. During the early 20th century, the engineers of the then Calcutta Municipal Corporation, led by B.N. Dey, built gently graded channels, installed extra pumps and sediment tanks to transfer the city’s wastewater to the wetlands. The wastewater would thereafter flow into the Bay of Bengal via the Kultigong.

Legend has it that in the early decades of the 20th century, a bheri owner by the name of Bibhuti Bhusan Sircar noticed that wastewater acts as nutrient for fish and doubled the yield of his fish. Soon, other bheri owners started drawing untreated sewage water into their bheris. Today, most bheris — covering 5,852 hectares — use wastewater as fish feed. The rest of the area is used to cultivate vegetables and paddy.

According to one estimate, fishermen working here produce over 13,000 metric tonnes of fish each year (36 metric tonnes per day) and the garbage farms provide half of the green vegetables (150 tonnes daily) available in Calcutta’s markets.

That day, as we drive past canals, fish ponds, channels and creeks, Ghosh and Chakrabarti explain why. The gist of it is this: untreated sewage is fed to the bheris, then it is allowed to stand in the sun, the heat from the sun helps plankton grow in the bheris and these in turn become fodder for the fish. In the process, the waste gets treated and the effluent is used to grow paddy and vegetables. Cheap fish and vegetables, grown at minimum cost, flood the city markets. The bheris are why the late engineer-ecologist, Dhrubajyoti Ghosh, once called Calcutta an ecologically subsidised city.

The wetlands help treat around 400 million litres of sewage and wastewater daily. The Kolkata Municipal Corporation (KMC), I am told, saves Rs 5,000 crore to Rs 7,000 crore every year — the cost of running an artificial sewage treatment plant — only because of this natural system. To those who raise questions about the safety of consuming fish reared on wastewater, Chakrabarti assures that multiple tests of bheri fish have never thrown up toxic substances despite scares of heavy metal contamination. “Domestic sewage is usually harmless, but there should be regular checks to detect all possible microbial and industrial contamination,” he says. During the monsoons, the bheris drain the storm water of the city, saving it from frequent waterlogging. They also act as a carbon sink, scrubbing clean the city’s polluted air. And then there is the direct human benefit — the bheris support livelihoods of nearly 63,000 people.

In the early days of these bheris, fish cultivation was entirely controlled by the landowners. But after the Left Front government came to power in the late 1970s, the ownership pattern changed. Landlords had to apportion patches of land to fish cultivators as part of Operation Barga, the land reform movement. The production process gradually passed to many leaseholders and, in some cases, to co-operative bheris built by fish farmers alongside private owners. 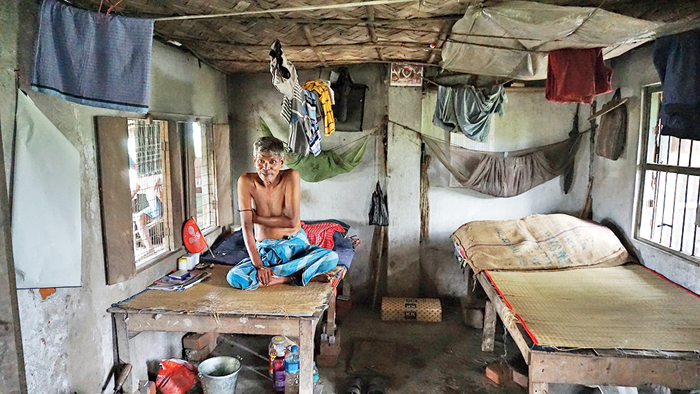 For Sunil Mondal, the wetlands are quite another world
Prasun Chaudhuri

Ghosh, a former scientist at the state fisheries department, leased two bheris, Jograshisa and Gomukhpota, with two other partners, 22 years ago. The owners are the descendants of Sircar. We arrive at the tree-fringed embankments of Jograshisa that covers an area of 500 bighas (66.5 hectares).

The main fish pond is not far from a row of tower blocks. Fish — rohu, catla, bata, pangas, nilotica, tilapia, silver carp — have just been harvested by one group and another carries the haul to tanks by a shed. Ghosh is informed that today’s haul is 754 kilos. Small goods vehicles are waiting to carry the fresh harvest to the market.

As Shyamal Mondal, the caretaker, takes me around the place, a gentle breeze blows in from the east. Says Mondal, “Even in the afternoon it is cool here. We are surrounded by water everywhere; it is altogether another world on the periphery of Calcutta.” He shows me ponds for nursing, for rearing and for stocking fish. I see the feeder canals and other nitty-gritty of running the bheri. He takes me to the ala (a biggish hut with three rooms) where seven workers live in a kind of a dormitory. Mondal looks after the accounts and takes care of the hatchery. The 55-year-old has been employed for 20 years. Each bheri employs 110 people and this includes about 30 women.

There are “catchers” and “carriers” — those who catch and transport the fish, respectively — night guards and those who work to maintain the ponds and nurseries. Most of the workers are contractual daily wage labourers who earn a minimum of Rs 230 per day plus a variable bonus. They are entitled to two months’ paid leave in a year and some support in case of medical emergencies. 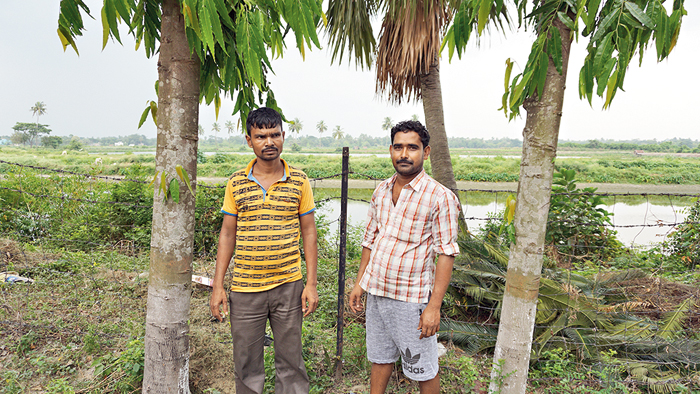 Jayanta and Mathur Mondal are cousins working in the bheri. Their fathers had worked here and it was their grandfather, Budhiswar, who had joined Jograshisa at a salary of five “shike” (Rs 1.25) per day during the British period. Jayanta is 32 and his cousin is two years younger. They live a nearby village near Rajarhat township and come to work in the morning on a motorcycle and leave by afternoon. Both have families with two children who go to local schools. In the late afternoon they work as carpenters. Some others pitch in for a spot of masonry.

The cousins are happy with the job; they work hard from the crack of dawn till the fish is loaded into polythene drums. The jyanto or live fish has a huge demand in the market. Sometimes the cousins also get a share of the catch. They breakfast on fried tilapia and muri (puffed rice) and do some menial jobs before they head home. Relations with the management and owner are cordial. “Life is peaceful here. There’s no trouble,” says Jayanta.

The bheris and their fisheries are facing a number of challenges, in addition to the most obvious threat of urbanisation. Says Ghosh, who is also the secretary of Jalabhumi Bachao or Save the Wetlands Committee, “At the moment, the biggest threat is the dwindling supply of sewage water to the ponds. This is affecting fish production and the profit margins of most bheris.” It seems even a few years ago, the daily haul was at least a quintal (1,000 kilos); now the average is 750 kilos.

Buzz is that behind the unravelling lies poor governance, lack of interest and poor management on the part of government authorities — the KMC and the state irrigation department. Oftentimes the pumps meant to release sewage water to the bheris are not properly operated and canals that supply water to the ponds are silted and seldom cleaned. As a result, untreated sewage water is directly drained into the Kultigong, jeopardising the natural sewage treatment process.

Lack of adequate supply of sewage water is forcing some fish farmers to use artificial fish feed like jhilli — treated skin waste from tanneries — which is harmful to both fish and those who consume it. This is also diminishing the variety of fish — singi and magur are becoming rare.

However, the biggest threat that looms over the bheris are real estate developers looking to expand the city into the wetlands.

In 1992 and 2008, the non-government organisation, People United for Better Living in Calcutta, went to court against attempts made by private enterprises as well as the state government and won landmark verdicts in favour of the wetlands. The impact of the verdicts has, however, diminished over the past years as the land mafia are working on ways to bypass the court orders.

Ghosh laments that while the Calcutta model of organic sewage management system is being adopted elsewhere in India — by Nagpur, Chennai, Bhopal — the city’s bheris have too few ambassadors and exploiters one too many. The late Dhrubajyoti Ghosh had once described the wetlands as the kidneys of the city. And we all know what happens when the kidneys pack up.