When it’s cloudy, these nine music videos manage to steal the thunder, pelting metaphors for the rain

November Rain: One of the things that hits the reader in former White House press secretary Sarah Huckabee Sanders’s book Speaking For Myself? He has even called the video the greatest of all-time 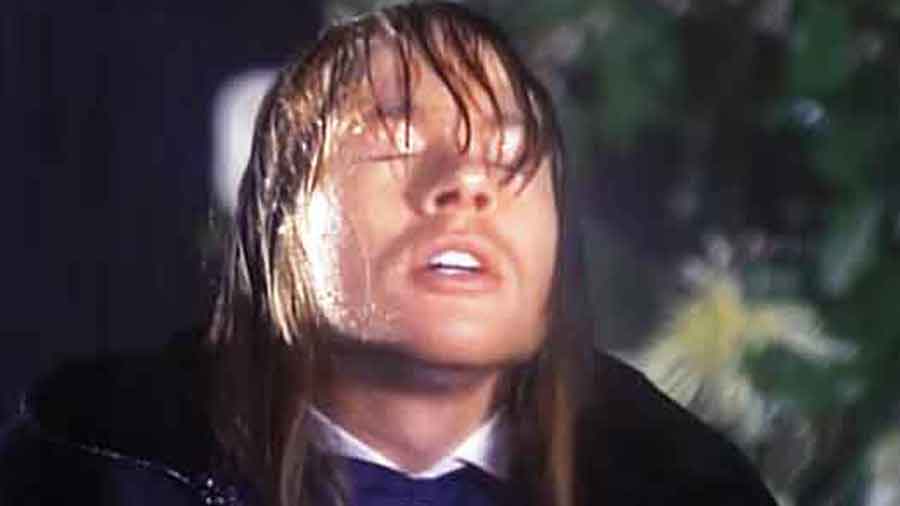 Now, what could have made Donald ‘Tantrum’ Trump consider adding November Rain to his rally playlist in 2018, one of the few things that hits the reader in former White House press secretary Sarah Huckabee Sanders’s book Speaking For Myself? He has even called the video the greatest of all-time. Maybe it was Slash playing his solo, legs akimbo; or perhaps it was the rain scene which appears normal to the casual eye but in the video people scream, things are knocked over and one man even tries to escape by leaping face forward into a cake. The video actually takes the cake for being one of the most-played on YouTube and we, for once agree with Trump, that it is among the greatest ever made.

Rain On Me by Lady Gaga and Ariana Grande

At a time of global pandemic and other painful moments around the world, making life somewhat bearable was this video in the early part of the global lockdown. Though a break-up song with Lady Gaga singing At least I showed up, you showed me nothing at all, it ultimately turned out to be reflective of life in general, about how bad 2020 was and it’s very much applicable to the current year. Gaga and Ariana Grande are at their earnest, getting caught up in the rain but throwing all cares to the wind.

That Taylor Swift takes pleasure in things we too enjoy gives Delicate a place on the list. She gets the power to become invisible and live a life without care... even dance in the rain without having to worry about the paparazzi. But there is a deeper meaning to the song and video — what happens when you find the right person in life but wonder what he or she knows about you. Like she sings: My reputation’s never been worse, so/ You must like me for me.

Success greeted the Weather Girls’ classic in heaps but one half of the duo — Martha Wash — had said in 2017 that they may not have recorded it. “We thought it was a crazy song — in fact, too crazy to record. I kept saying, ‘It’s raining men? Really? Are you kidding me?’” Popular in the LGBT community, the song ultimately got the Geri Halliwell treatment in 2001, becoming a part of the Bridget Jones’s Diary soundtrack. Besides Flashdance-inspired scenes, it’s Halliwell dancing in the rain that makes the video memorable.

Helena by My Chemical Romance

One of the finest tracks by the New Jersey rock band, it’s a tribute to band members Gerard Way and Mikey Way’s grandmother. The eerie feel in the song stems from Gerard’s regrets. “It’s about why I wasn’t around for this woman who was so special to me, why I wasn’t there for the last year of her life,” he has told Kerrang! magazine. The rain seen midway through the video is real, fitting in with the visuals, creating a high-concept rock melodrama. The video is truly a visual delight.

Cry Me A River by Justin Timberlake

When it rains, it really pours in Britney Spears’ world. Soon after Justin Timberlake and Britney went their separate ways, the former released the video to Cry Me A River, which featured a Britney lookalike and the lyrics were accusatory: You don’t have to say, what you did/ I already know, I found out from him. Timberlake has offered (somewhat) of an apology a few months after The New York Times documentary Framing Britney Spears took viewers deep into the mess. “I specifically want to apologise to Britney Spears and Janet Jackson (for the wardrobe malfunction in 2004 during the duo’s performance at Super Bowl Halftime) both individually, because I care for and respect these women and I know I failed,” he said. In the video, it rains and it pours. Ultimately, each time the video is played now, viewers have a different picture of Timberlake.

Rain Over Me by Pitbull, featuring Marc Anthony

Bang in the middle of the Pitbull decade, appeared this club jam which hammers thumping beats into your ears while Marc Anthony sings about how “a billion’s a new million” why it should “drown in love”. Anyway, this remains a club anthem and the video has crossed a billion views, perhaps because of all the rain filters or maybe it’s the number of times Anthony harps on “ay ay ay” to win our ay-fection.

Eric Clapton and his group defies a downpour, and the guitar God doesn’t bat an eyelid as he sings I get lost in alibis/ Sadness can’t prevail/ Everybody knows how love can’t fail while love, lies, anger and the rain all merge. This video is a great example of how to make a memorable music video minus side effects. Sadly, a couple of years after the release of the album Journeyman (of which Pretending is the opening track), Claptop’s life took a different turn as tragedy struck.

Singing In The Rain by Gene Kelly

How can we not include a tap-dancing Gene Kelly in one of the most joyous performance on screen? Each time Kelly jumps on those puddles, our miseries seem to disappear.