Pink Floyd regroup after decades with a new song for Ukraine 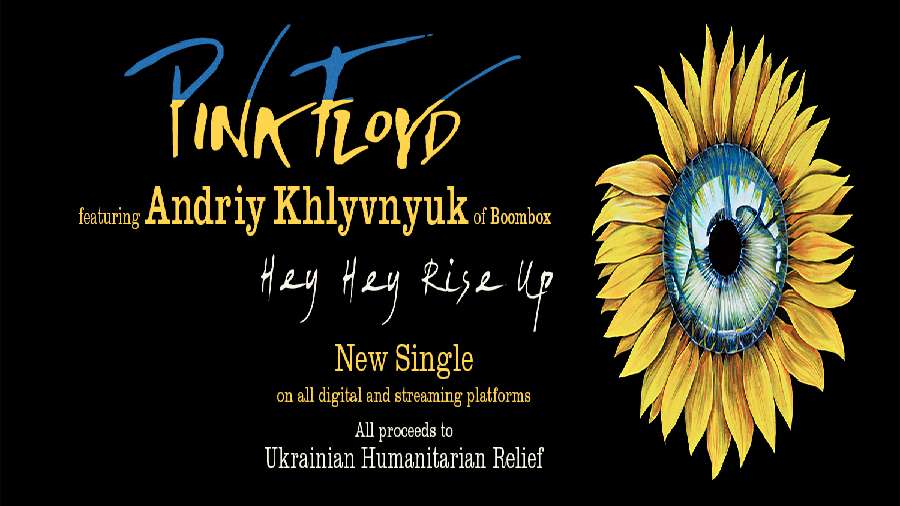 The artwork for the track features a painting of the national flower of Ukraine, the sunflower, by the Cuban artist, Yosan Leon. The cover is a direct reference to the woman who was seen around the world giving sunflower seeds to Russian soldiers and telling them to carry them in their pockets so that when they die, sunflowers will grow.
Telegraph picture
Shantanu Datta   |   Published 08.04.22, 12:50 PM

Pink Floyd has just released their first new recording in decades, accompanying a Ukrainian singer’s stirring rendition of a folk song in battle fatigues, the iconic British rock band’s show of solidarity aimed at raising funds and expressing support to the “resistance”.

Hey Hey, Rise Up, which dropped on YouTube and sundry other streaming services at midnight on Thursday, sees rockstar grand-dad and frontman David Gilmour adding guitar finesse to the extraordinarily emphatic vocals by Andriy Khlyvnyuk, a frontline soldier and member of Ukrainian band BoomBox, with whom Gilmour had played with in 2015.

Gilmour, who has a Ukranian daughter-in-law and grandchildren, says: “We, like so many, have been feeling the fury and the frustration of this vile act of an independent, peaceful democratic country being invaded and having its people murdered by one of the world’s major powers.

“I hope the track will receive wide support and publicity. We want to raise funds and morale,” he adds in a statement reported by nme.com, a website dedicated to music and pop culture.

The song sees Gilmour and drummer Nick Mason accompany Andriy along with Floyd’s long-time associate, Guy Prat, on bass, and music producer and composer Nitin Sawhney on keyboards. It was recorded on March 30 in Gilmour’s barn from where he had been airing their “Von Trapped family” live streams during the pandemic-induced lockdown.

The song title, “Hey Hey, Rise Up”, is from the last line that translates as “Hey, hey rise up and rejoice”. Gilmour and his band samples Andriy’s vocals from his Instagram post in which he is at Kyiv’s Sofiyskaya Square, singing “Oh, The Red Viburnum in the Meadow”, a rousing Ukrainian protest song written during World War-1. It is, as anti-war folk songs are, a determined cry to keep alive the resistance, reinforced by Andriy’s voice that has the sweeping flourish of an opera singer, underlined with authority that the classical arts tend to radiate.

“He stands in a square in Kyiv with this beautiful gold-domed church and sings in the silence of a city with no traffic or background noise because of the war,” Gilmour says. “It was a powerful moment that made me want to put it to music.”

Gilmour has said that after finding the chords for what Andriy was singing, he worked on his own guitar part _ a part, he joked with The Guardian, that could make him the “the rock guitar god” he was meant to be. His solo is searing, heartfelt and measured; the identifiable Gilmour touch explicit in the pauses and the bends of notes that seem to come from the deeper reaches of his heart as always.

This is a 3.5-minute song in which the Pink Floyd quotient is never overwhelming. Instead, the seasoned musicians choose their notes with caution, all the while framing Andriy’s powerhouse vocals amid the reassuring cushion of Sawhney’s understated keys and Mason’s minimalist drum backing.

Andriy likes the end result. “Thank you, it’s fabulous. One day we’ll play it together and have a good stout afterwards, on me,” he said in a message to the aging rockstar with whom he and his band, BoomBox, had played live at a London benefit concert in 2015 for the Belarus Free Theatre.

The Ukranian band leader, who abandoned their US tour in late February to join the war back home, later spoke to Gilmour to tell him about the work he was doing in war-ravaged Ukraine. “He said he had the most hellish day you could imagine, going out and picking up bodies of Ukrainians, Ukrainian children, helping with the clearing up. You know, our little problems become so pathetic and tiny in the context of what you see him doing,” Gilmour reveals to The Guardian.

This is Pink Floyd’s first new song in 28 years, although Gilmour and Mason got together in 2014 to revisit outtakes from their 1994 album The Division Bell that led to The Endless River, a primarily instrumental exposition meant as tribute to their late keyboard player Rick Wright, who had died of cancer in 2008. At the time Gilmour had famously said there would be no new Pink Floyd music ever again. “It’s a shame, but this is the end,” he told the BBC.

The Ukraine war has meant that it was not to be. The video of Hey Hey, Rise Up, directed by Mat Whitecross, begins with an explosion leading to a menacing fireball. We hear a choir chant the lyrics as Nick guides the band in with a silent count of one, two…It ends with children joining Andriy in singing the song. We don’t get to hear them though. And while we expectantly await a crescendo, the music ends abruptly. The sound of silence that follows is deafening.