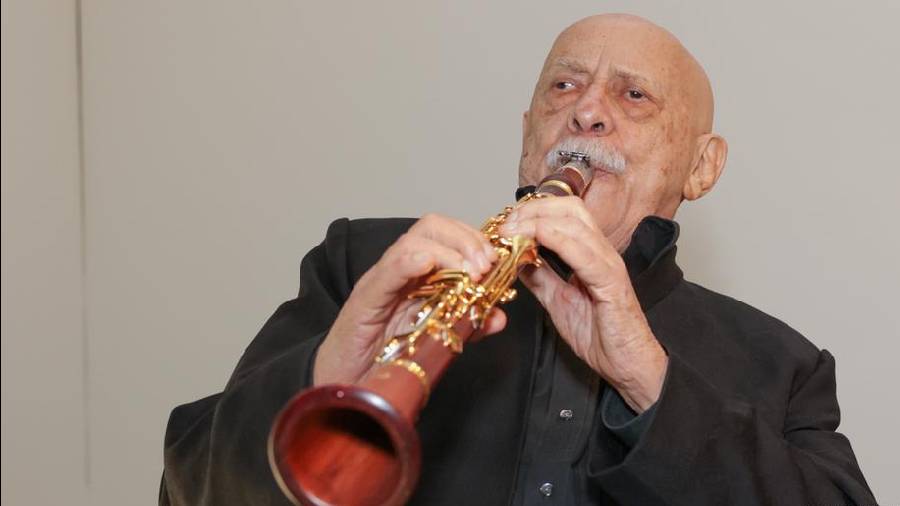 The 'King of klezmer' shaped the soundtrack to "Schindler's List" and made Jewish music world-famous. He presented his clarinet to the museum after performing a concert.

He might be 86 years old but retirement is far from his thoughts. Quite simply, Giora Feidman cannot live without music.

To him, music is a universal art form that dissolves religious, racial or cultural barriers. "Music is always about feelings, it awakens the best in us," he wrote in his memoirs "Sound of Hope," published in 2021.

'Microphone of my soul'

Emerging from the pandemic lockdowns, Feidman is back on the road with his Friendship Tour — that also celebrates 75 years since his first stage concert — across Europe and the US that took him to the German capital on July 26.

After playing at the Jewish Museum Berlin (JMB), he bequeathed his precious clarinet to the institution. "It has a beautiful, lush and full tone. I was involved in the tonal development of the model myself," he enthused about the instrument that was built for him in 2018.

Feidman is one with the instrument through which he pours out dazzling solos or delivers deep-throated laments.

"I try, and I practice, to bring the sound of my innermost voice to this instrument that we call the clarinet. I can't express it any other way: the clarinet is the microphone of my soul," he told DW in 2016.

In his memoirs, Feidman reveals that he reaches for his clarinet first thing in the morning.

"Every morning I want to find out anew what surprises are in it today," he wrote. "I unwrap it, give it a kiss, and then I start playing. My wife isn't jealous about that, by the way — she knows that the kiss is my gesture of thanks to my instrument, thanks for all the experiences and unforgettable moments it has already made possible for me."

Feidman was born in Buenos Aires in 1936 to Bessarabian Jews from the Modovan capital, Chisinau, who had fled brutal Jewish pogroms around 1905.

His father, grandfather and great-grandfather were "Klezmorim," or wandering musicians who performed in predominantly Jewish villages and small towns (Schtetl), particularly at weddings, banquets and dances. His mother also sang Yiddish songs.

Feidman also performed with his father at celebrations in Buenos Aires from a young age. At around 14, he received lessons at the Academy of Music and four years later joined the prestigious Teatro Colon orchestra.

In 1956 he emigrated to Israel and soon joined the Israel Philharmonic Orchestra as a bass clarinetist while continuing to play klezmer. In the early 1970s, he began a solo career as a klezmer musician and moved to New York before taking his Jewish musical oeuvre to Germany in the 1980s.

Asked about the relationship between Germans and Jews, he once said in an interview: "The healing process between Jews and Germans has come to an end. We live in the present, and that is unity. Which does not mean that we should forget the past."

To aid this healing process, Feidman helped bring what is known as the New Old Europe Sound to Germany, a type of music that combined elements of klezmer and Balkan traditional song that attracted a large following in the 1990s.

Of the roughly 150 concerts he performs annually, 60% are held in Germany. Feidman's recent Berlin performance combined another act of reconciliation when he gifted his clarinet to the Jewish Museum.

"I am giving this valuable instrument to the JMB because I want to support the mission and work of this special house," he said on Tuesday. "Visiting the new permanent exhibition last year touched me deeply."

Museum director Hetty Berg noted that "Feidman triggered a klezmer boom in Germany." Even if his clarinet music is not a part of German-Jewish heritage it is intrinsic to a revival of Jewish culture in the country, she said.

The JMB is exhibiting the clarinet as part of the museum section titled "The Jewish Object."

"Feidman's clarinet fits in perfectly here," Berg explained. "What is Jewish about a clarinet? First of all, nothing — but through Feidman's music and his musical mission, it becomes Jewish."