All that you should know about Harry Styles 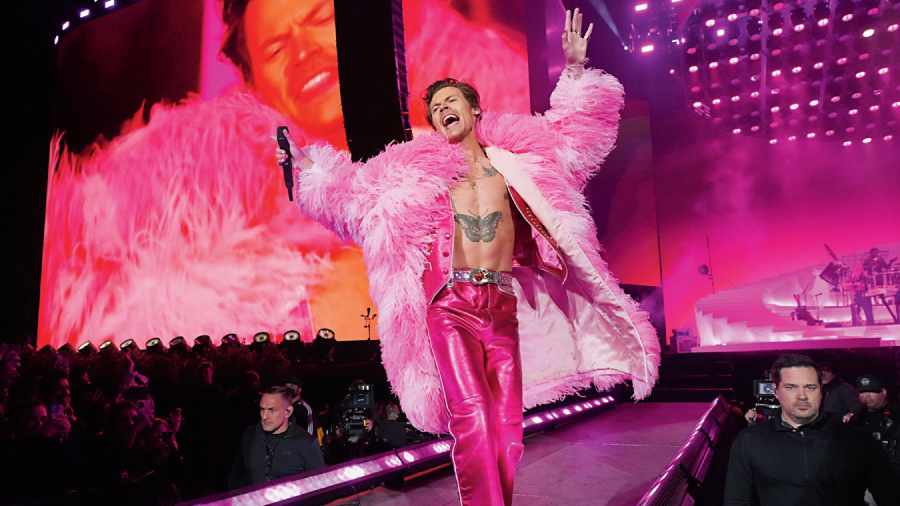 It was 1987. The ever-charming Prince was at the equally charming age of 24. He was done with his album 1999 (released in 1982), featuring the one-night-stand song Little Red Corvette, packed with sexual metaphors, and two years later came the supremely beautiful Purple Rain, followed by a couple more albums. It was truly a creative phase for him.

The year 1987 was also the time when talks around AIDS was all over the place — some poorly-researched articles labelled it a pandemic and there were reports of how scientists in France were trying to come up with vaccine. Prince sang: In France, a skinny man died of a big disease with a little name/ By chance his girlfriend came across a needle and soon she did the same. Add to this gang violence in Los Angeles. The Challenger had exploded a year earlier. A few years ago, people close to Prince recalled how the musician thought it was an apocalyptic time.

Yet, the music that was being recorded at that time wasn’t the sign of the times. At the same time, he was at the cutting-edge of music technology, with the Fairlight keeping his console company. Fairlight Computer Musical Instrument was much more than a digital synthesiser, sampler, and digital audio workstation. The man records Sign O’ The Times on which he played all the instruments. He was always relevant.

So it wasn’t out of place when Harry Styles chose to call his 2017 debut solo single Sign of the Times, namesake but with different content. He sings: Just stop your crying/ It’s a sign of the times/ Welcome to the final show/ Hope you’re wearing your best clothes.

‘This is my favourite album’

The message Harry sent out while recording his song was that he too was trying to do something different, something that wasn’t reflective of his time with One Direction. It was a tragic ballad. The blustery metaphors continue well into his new song As It Was — In this world, it’s just us/ You know it’s not the same as it was — and the new album, Harry’s House, a collage of well-crafted pop songs with enough references.

“As I started making the album, I realised it wasn’t about the geographical location. It’s much more of an internal thing. When I took that title, put it to the songs we were making, it felt like it took on this whole new meaning and it was about, imagine it’s a day in my house. What do I go through? A day in my mind, what do I go through in my house? I’m playing fun music. I’m playing sad music. I’m playing this, I’m playing that. Feeling stuff. Kind of like a day in the life. I like all of that stuff. And I think while it obviously is a lot more electronic in a lot of places than anything I’ve made, it’s also so much more intimate to me. And so much more intimately made. It was like, ‘I’m going to play in my house and you can come visit 100 per cent, but I’m making this because it’s what I want to listen to.’ And this is my favourite album at the moment, and I love it so much,” Harry recently said during his interaction with Apple Music’s Zane Lowe, who is one of the most insightful music show hosts.

It’s very interesting times for Harry. When he was making music as part of One Direction, it was more about being young and being excited about being young. By the time One Direction took a break, the music world had changed and musicians like Billie Eilish and soon after, Olivia Rodrigo, started making their presence felt.

Harry spoke to Zane about how he felt the change. “I definitely had a really big moment, I think, when Billie Eilish first blew up. And I think being in the band, I’d always felt like we were really young. We were just really young, and it was fun and exciting because we were young. And I had a moment seeing her do this at such a young age where I felt like, ‘I’m not that young anymore’. And for a while it was, how do you play that game of remaining exciting? And I just had a moment where I felt like, ‘Okay, we are not the same thing.’ And in the same vein of, you’re not always going to be the young thing, I was like, ‘Okay. I would like to really think about who I would like to be as a musician. Well, I think we’ve ran into each other a couple times, but I’m, from afar, incredibly thankful to her because I feel like she felt like she represented something to me…. She totally broke the spell for me in a way that I’m very grateful for.”

‘No one knew where I was’

The 28-year-old singer in a way mirrors how Robbie Williams’ career took off after his time with Take That. For Robbie, life became interesting and entertaining minus all the boy-band meanderings. Not that Robbie and Harry don’t aim for radio-friendly sounds but lyrically they are magicians. Robbie has often recalled the difficult path he had to walk after Take That. Harry too had to clear out the trappings of an earlier musical life. He visited Italy, drove with a friend and then drove back all by himself. “It was like an open-ended trip…. I just stayed there for a couple of weeks by myself and [time] just went so slowly and I felt much more present than I’d been in a really long time. I’d walk around and I’d get a coffee and I’d sit down. I think I just relaxed a lot and felt like no one knew where I was and felt like a human being, and felt very small in a really nice way. And driving back, I was by myself for the whole drive. And I love driving,” Harry said during his interview with Apple Music.

Billie Eilish has made Harry Style reflect on his musical direction

The year is unfolding perfectly for the singer, especially when one considers his Coachella gig and the new album. But he is also aware of the fickle nature of the music business. The words of British actress Michaela Coel stay with him. She said: “Don’t confuse visibility with success.”

Harry Styles’s debut single — Sign Of The Times — has the same title as the classic Prince track from 1987, both capturing the essence of their respective eras

The As It Was singer agrees: “It can’t be put better than that, I think. And it’s not an easy place to get to, because it’s a world where we all just want to be loved, and then inside that, music is an industry where everyone just really wants to be loved really bad.  And everyone’s just kind of gagging for it in that kind of positive reinforcement. Yeah, and I think what is so exciting and dangerous about it is that you put so much love into an industry that’s so fickle, it loves you back when you’re doing well. And if you’re not, you’re just out. And it’s understandable, that it’s really scary to go away and be like, ‘No one’s talking about me’, or, ‘No one cares’, all of that stuff, get into that kind of place. And I have to get onto social media and remind people I’m alive or all of that stuff. And I just kind of feel like I did a lot of that constant thing when I was in the band.”

Harry’s House is overflowing with deep meaning, like Prince’s Sign O’ The Times (to understand the deeper meaning to the song, tune in to a short video produced by The New York Times, featuring Prince’s musicians). Of course, Prince had an answer when it came finding an escape route from all the bad news around him: Sign o’ the times mess with your mind/ Hurry before it’s too late/ Let’s fall in love, get married, have a baby/ We’ll call him Nate/ If it’s a boy. For Harry too, love remains the answer to all the problems around him and that’s what his new album reflects.

Hey Harry, we’re listening to ya

I see a part of myself in the evolution of Harry Styles’ musicography. From the teenage angst that made everyone turn their head around to a calm adult who is secure and happy with all the choices and mistakes made in the past. From the chart-topping Drag Me Down to the tear-inducing Falling, you find the sojourn of a man not trying to rule or win or prove any point but finding solace in his own style. Closely following his oeuvre, one cannot help but fall in love with a man who treats people with kindness
Kaninika Dey, student, Jadavpur University

I have been following Harry’s music since One Direction and I’m so excited for his new album (Harry’s House). If the rest of the album is anything like his single As It Was I’m so ready to dance through my tears. In a world of toxic masculinity, Harry gives off “man written by woman” energy and I think that’s where his appeal lies — he is the embodiment of everything you would want from a man. I love how he has become more expressive through his style over the years and is breaking all gender normative barriers — we are way past his black skinny jeans era to say the least. Also, in case you were wondering, if Harry Styles asked me to jump off a cliff, yes I would
Adrija Roy, student, Maulana Azad College

From wearing a beanie while dating TS (Taylor Swift) to long-hair Harry look to his solo debut where can be seen wearing high-wasted trousers, feather boas, pink suits, pretty nailpaints, Harry Styles’ style quotient has grown more creative and has developed overall in style. Harry is praised not only by fans but people worldwide for his willingness to style in gender-neutral clothes. We can predict that in his upcoming film, Don’t Worry, Darling, we can see a new style era for Mr Styles with his retro suiting owing the period setting of the film. Styles is a trendsetter, be it fashion or music, and with Harry’s House he continues trying on different styles in an effort to discover his own. Harry’s House is one of Styles’ best record yet and presents a musician who is very confident in what he wants to create right now.
Riddhima Das, student, Ashutosh College

Harry Styles is an amazing musician, actor and fashion icon. I’ve literally seen him grow from the curly-haired, dimpled boy-next-door member of One Direction to the Grammy winner Harry Styles and I honestly don’t have words to describe how proud I am of him. He creates music that takes you to magical places. Music which makes you feel a whole range of emotions. I am extremely excited for his new album, Harry’s House, and eagerly waiting for it
Saranya Roy, student, Bhawanipore Education Society College

To me, Harry’s music seems very intimate and emotionally funky. His latest single As It Was has all my heart. The vibe is very gloomy mixed with 80s pop. He made me fall in love with a totally different genre of music, one I never expected to like.
Kashish Tibrewal, student, ISI Kolkata

Harry Styles has the most soothing voice and his lyrics always hit the right spot! I feel like my music taste has evolved with his work, and the diversity in his music from One Direction to Harry’s House ensures that there is a song for every mood! Not to forget, he’s the most handsome, confident, kind man out there.