Beef was an offering in Vedic age

Who deemed that the cow should be holy? How did Narad come to be known as the divine mischief-maker? Bitan Sikdar shares a nugget or two from the Indologist's current project 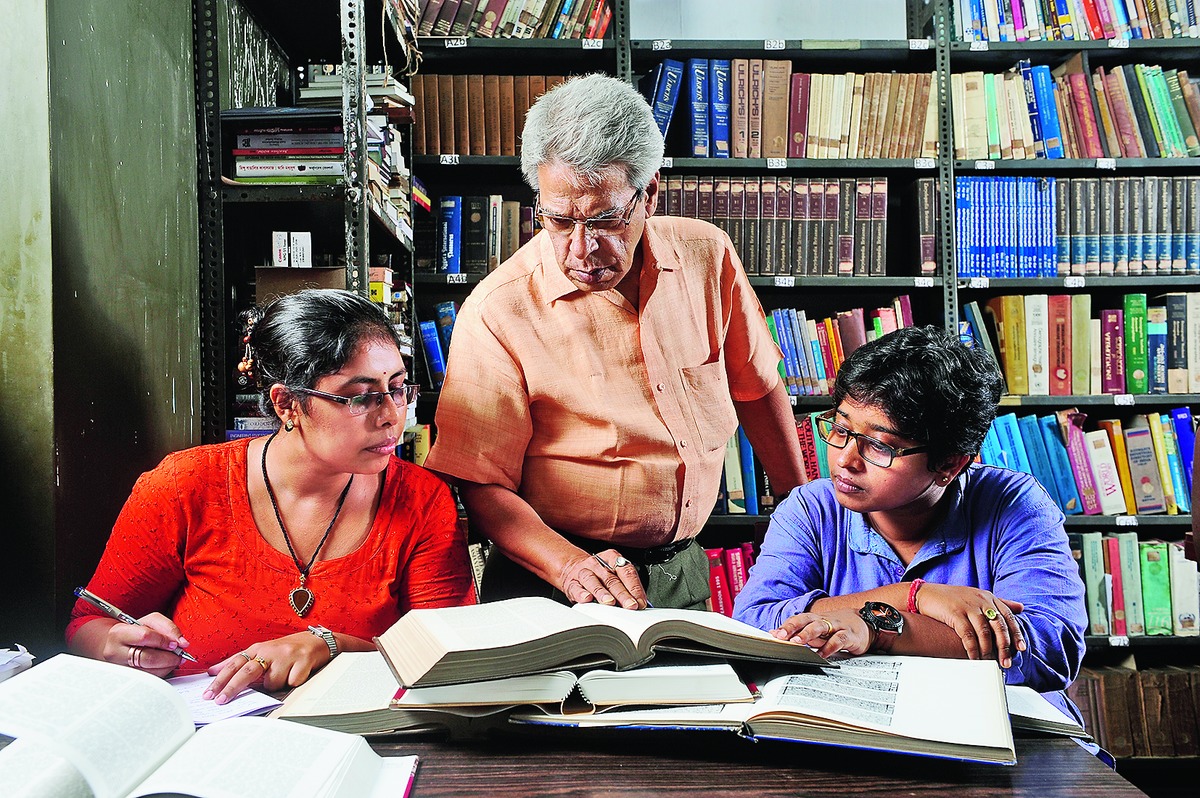 Getting stuck in a bovine-induced traffic snarl on a posh south Calcutta road may irritate many, but not this sexagenarian. We are driving to his office in central Calcutta - the Netaji Institute for Asian Studies on Woodburn Park. It is a weekday, office hour at that, but the animal is sitting bang in the middle of Gariahat Road with its eyes closed, ruminating and oblivious to the chaos it is causing. At last, a traffic constable comes to our rescue and once again the car starts to move. This time, my fellow passenger, Indologist Nrisingha Prasad Bhaduri, suppresses a chuckle and chants - " Devanam bhagavan kasmallokesanam pitamaha/uparisthad gavam loka etadicchami veditum."

Then he proceeds to translate benignly. "In the Mahabharata's Anushasan Parva, Indra is posing a question to Brahma - Why is the cow placed even above the gods in the shastras? Brahma replies, ' Yajnangam kathita gavo yajna eva ca vasava'. It means, yagna, in the Vedic era, has almost become synonymous with the cow, and in the process, this new hierarchy has come to be."

It is not long before we pull into the institute. Bhaduri continues to look amused. After settling down and composing himself, he says, "See for yourself how, for ages, selective quoting from texts has been creating and spreading all sorts of misconceptions." He continues, "Yes, if you go by the Anushasan Parva, the cow is at the top of the social hierarchy. The text specifies that no yagna or prayer is complete without the cow's milk and the ghee and curd made from it. Beyond this, its service to the one who toils in the field is unparalleled. In fact, the cow is referred to as the 'bountiful mother'."

A brief pause and he says, "But what if I quote from the Shatapath Brahman? After all, it is also regarded as a valued Vedic scripture." (He is clearly enjoying himself, this relentless quoting from the scriptures.) "What if I quote none other than Yajnavalkya - one of the earliest philosophers in recorded history - who questions many metaphysical propositions? Yajnavalkya says, 'I eat it (beef) only if it is cooked till it is tender'." The king of the gods, Indra, too is said to be fond of beef, Bhaduri reminds. In the Rig Veda, Indra demands that he be served 15 to 20 cooked oxen.

Bhaduri now adds that it was a custom in the Vedic ages to offer a cow to a priest. And - if not a full cow - beef was a must for the madhuparka or offerings. Later, the practice became symbolic of sacrifice. In the Mahabharata, Vyasa is seen accepting a cow but releasing it thereafter. "Here the cow is neither killed nor consumed. Because, by then, people had understood that the animal was very useful in daily life," he says.

This meeting is to discuss Bhaduri's Purankosh - his ongoing venture of compiling an encyclopaedic dictionary of the Hindu shastras, consisting chiefly of the Mahabharata, the Ramayana and the mukhya or primary Puranas in Bengali.

On the Puranas bit, the Indologist informs that he will not be focusing on the 18 main Puranas. Only those that are relevant to both tradition and modernity. Texts such as Matsya Purana, Vishnu Purana, Bhagavat Purana and Vayu Purana figure in Bhaduri's list.

But why would the two epics figure within the Purana genre? According to Suranjan Das, historian, vice-chancellor of Jadavpur University and a principal well-wisher of the initiative, "They supplement the Puranas and vice versa. The three hold together the world of Indian mythology, crucial for a comprehensive understanding of ancient Indian culture."

Bhaduri hopes this project will help clear many misconceptions. A peep into the ongoing work - two volumes have been published by the Sahitya Samsad - gives one a consolidated picture of a character or topic related to the Hindu shastras. The project has been funded by the Bengal government's higher education department.

While the project took almost a decade to be conceptualised, it will take most likely another decade before it can be completed. "We have to take into consideration every possible authentic version of the twin epics and the chosen Puranas. So, the efforts behind it go unsaid," says one of Bhaduri's team members, Sucheta Bandyopadhyay, who was a student of Bengali literature. Aitrayee Sarkar, who has studied Geography, is also part of the initiative.

Bhaduri refuses to accept that in the age of Harry Potter, people will be reluctant to turn the pages of Purankosh. "Why not? They will and they must. If one chooses to quote from the shastras every now and then to authenticate actions, one must know it thoroughly. And this is a book which will not only give people an authentic idea but also correct age-old misinterpretations."

He thunders, "Holding the shastras responsible for the wrongdoings of a handful of goons has, of late, become the norm. This is largely practiced by some ignorant critics. Neither the so-called dharma-rakshaks nor the samalochaks are in full possession of the content of the scriptures - which unfortunately bleed in their hands."

By way of example, Bhaduri brings up the context of Narad, the Vedic sage. Often dubbed as "mischief-maker", his identity has been reduced to an individual who indulges solely in spreading rumours or disclosing the secrets of the gods to the demons and vice versa. "But this is not a correct portrayal of the character of the sage," says Bhaduri. He adds, "In the encyclopaedia, the entry under Narad is an elaborate jotting about his character, his traits and the evolution of the myth of him being kalaha-priya or quarrel-monger."

Says Bhaduri, "In the Mahabharata's Sabha Parva, we spot Narad advising Yudhisthir on politics, sociology and economy. His devotional trait takes a back seat here and his diplomatic canny comes to the fore. Even in Kautilya's Arthashastra there is a reference to his wisdom, though here the sage is not mentioned as Narad but as Pishun." Bhaduri continues, "Pishun means one who is cunning and essentially diplomatic... So you see, one should not bracket the character either as a saint or as a crooked entity."

We want to understand if there is no other encyclopaedic work to date in Bengali. Author Sudinchandra Sarkar had compiled the Pouranik Abhidhan, then there is the Pouranika by author Amal Mukhopadhyay. Why again a Purankosh?

Bhaduri explains that the difference lies in the scope of the project. "I have tried to discuss elaborately every possible topic and quote references to the exact scriptures."

Wrapping up, we ask what would the wise ones writing the shastras have made of the current lynchings in the name of the cow.

Says Bhaduri, "The Vedas encapsulate the essence of Hindu dharma. They are replete with instances of sages and even gods consuming beef. In fact, a guest in a Hindu household used to be referred to - according to the Vedas -as ' goghna' or he who is served beef as part of the hospitality ritual." He refrains from making any overt political point, but after a pause, adds, "Religion was born for the need of society not the other way round."