The highlight of a railway heritage walk was the residence of the GM of South Eastern Railway that was once occupied by Wajid Ali Shah, the last ruler of Awadh

A white edifice overlooking the Hooghly in Garden Reach was built by the British in 1846, the architecture inspired by the Tower of the Winds in Athens.

The building, the highlight of a heritage walk on Saturday morning, was for a few years the home of Wajid Ali Shah, the last ruler of Awadh who was exiled to Calcutta.

But the first occupant of the home was Lawrence Peel, the chief justice of British India. He was the cousin of Robert Peel, two-time Prime Minister of England and one of the founding fathers of the Conservative Party.

“Fascinating titbits of colonial history is nested in every corner of the buildings in this area,” said Samrat Chowdhury, chief mentor of BAUL (Bespoken Architectural and Unique Legacies of Bengal), which organised the walk in association with the external affairs ministry and the railways. 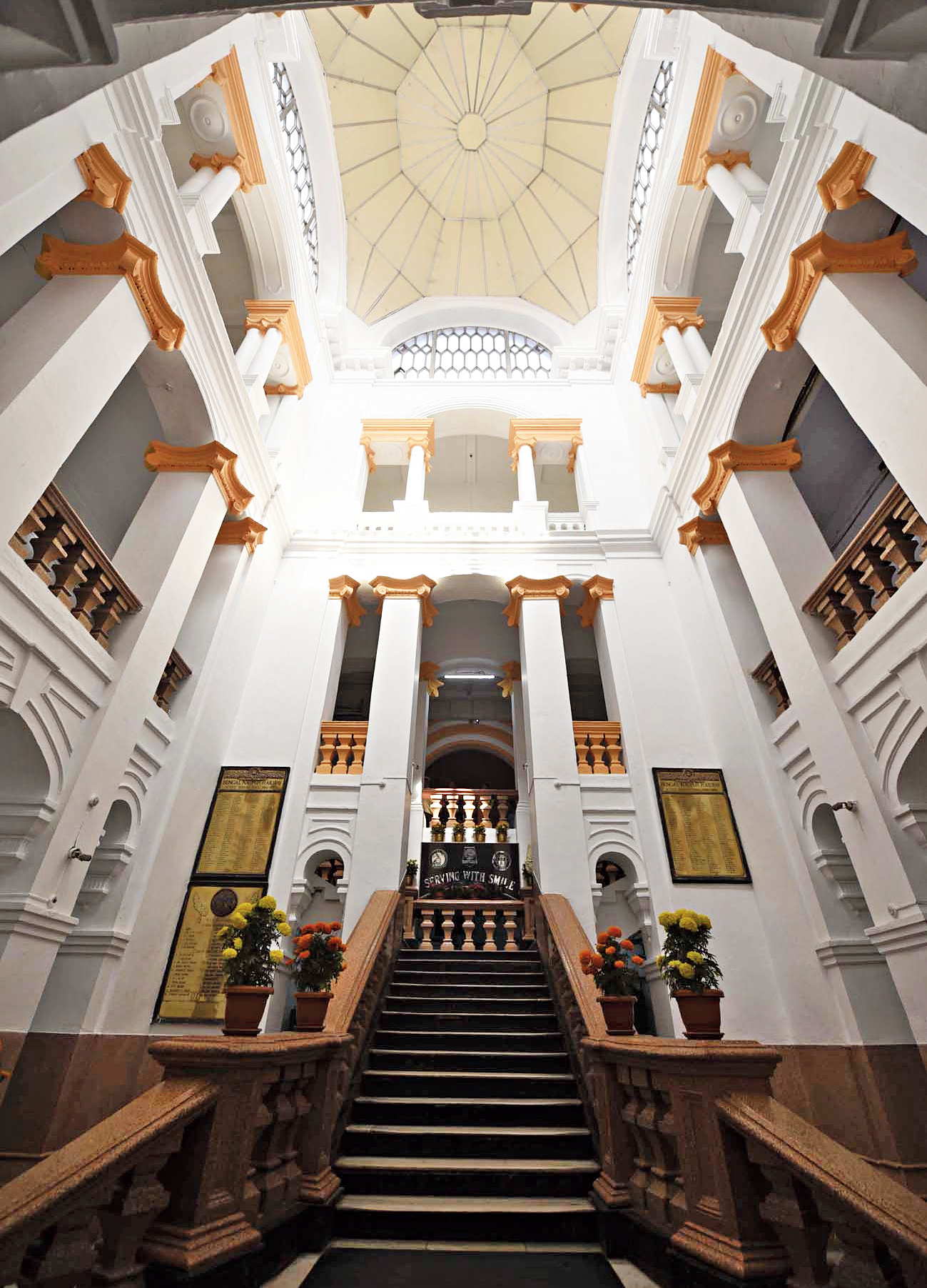 The inside of the building. The dome on top conceals water tanks

“The architecture is Indo Saracenic, also found in Madras High Court and Lucknow railway station. The red brick structure is occasionally relieved by stone terracotta. The western design is embedded with Indian features such as domes,” said J.K. Saha, chief heritage officer of South Eastern Railway, who guided the participants in the walk.

The construction of the building — spanning over 53,000sq ft — started in April 1906 and was completed in May 1907, a pointer to British engineering efficiency.

Several things have been left unchanged for over a 100 years, including the cast iron-Burma teak staircase to the glass door that leads to the general manager’s cabin. “The building has not needed any structural alterations,” said Saha.

Apart from railway officials and heritage enthusiasts, people from various walks of life took part in the walk on Saturday. Janavi Sanon, a 24-year-old architect, was one of them.

“This is my second railway heritage walk. As a student of design, this is an exciting journey. The history behind all these buildings makes it doubly interesting,” she said.

The deputy high commissioner of Bangladesh, Toufique Hasan, was a participant.

One of the main attractions was a newly opened heritage gallery at the railway office. A 119-year-old Schiedmayer piano was a key draw in the gallery.

Made in Stuttgart, the instrument was shipped to India in 1900. “It is difficult to say who brought it and who played it in Calcutta but it is vintage stuff and would fetch at least a crore in the antique market,” said Saibal Bose, senior railway engineer who has done extensive research on railway history. 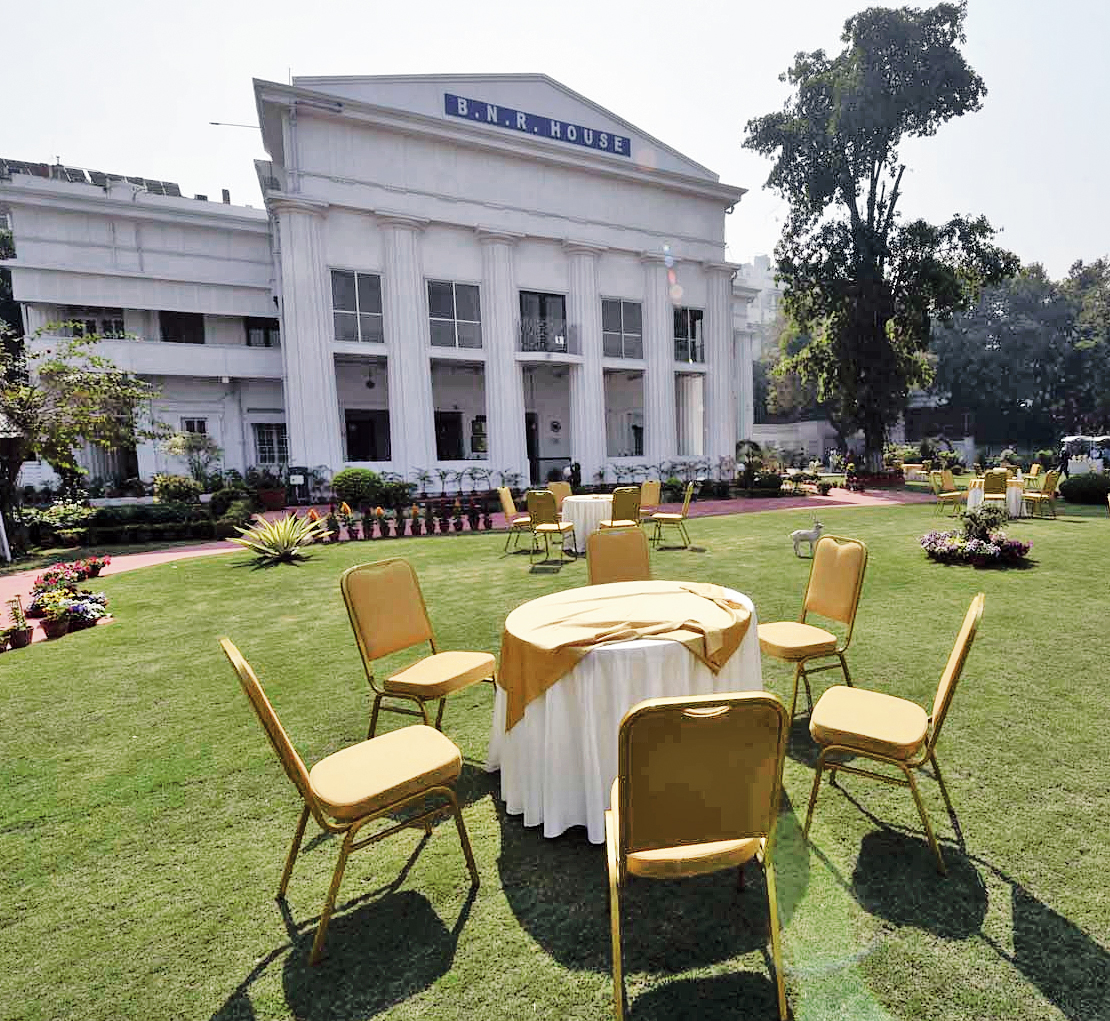 A feedback from Netaji Subhas Chandra Bose in a complaint book of a railway refreshment stall at Muri station, now in Jharkhand, is there on one of the shelves.

A cabinet is dedicated to shells made by the Kharagpur railway workshop of BNR during World War I and II. Resting beside the shells is a large splinter that was inside a bomb dropped by the Japanese in Garden Reach during World War II.

“People of the country need to know about this heritage. I want more and more schoolchildren and youngsters visiting these areas,” said Kajari Biswas, head of the external affairs ministry’s branch secretariat in the city.

Saha also explained why the area was called Garden Reach.

A reach is a length of a stream or river, usually suggesting a level, uninterrupted stretch. There is one such reach in the backyard of the headquarters. The botanical garden sits on the opposite bank.

“The reach and the garden gave this name,” Saha said.

In December, BAUL had organised a similar heritage walk around Howrah station. “We want to bring the railway heritage sites within the ambit of tourism. Ideally, there should be a single-window system that takes care of a guided tour of all these places. There is tremendous tourism potential here,” said Chowdhury.